NEW YORK - Glazed: The Legacy of the Della Robbia, a selling exhibition at Sotheby’s New York, was born from the desire to celebrate the oeuvre of a family of prominent sculptors in Renaissance Florence. Luca Della Robbia, head of the dynasty that prospered for three generations, was one of the most inventive artists in Renaissance Italy, and his “secret” glazing technique for terracotta was versatile, durable and graphically striking. Used in every sphere of Tuscan life from the civic to the secular to the sacred, the Della Robbia’s brilliant creations were so sought after that a rival Florentine studio emerged, run by the Buglioni family.

The Della Robbia legacy has endured- in the late 19th century there was a revival in interest, followed by a surge in American collecting in the 1920s. The superior quality and unparalleled detail of these pieces is ever present, and they are as colourful and luminous today as they were 500 years ago.

In advance of the exhibition, European sculpture specialist Margaret Schwartz and Fabrizio Moretti, the gallerist and collector who brought together the stunning group of nineteen sculptures, shared their enthusiasm and appreciation for these works that are both firmly anchored in the history of art, yet are also timelessly contemporary in their aesthetic.

Who were the Della Robbia and what was so groundbreaking about their technique?

Fabrizio Moretti: Their glazing technique was revolutionary and made them famous within the history of art. The colours they achieved – white, yellow, blue – they are magic colours.

Margaret Schwartz: The Della Robbia were a family of sculptors, led by Luca della Robbia who was well-known for his work on the Duomo in Florence, among other projects. The glazing technique that he developed during the first half of the 15th century revolutionised Renaissance terracotta sculpture in Tuscany (and eventually well beyond that region). Luca’s “secret recipe” glaze adhered to the clay in a unique manner allowing for an easier application. It was also rich in colour, durable and he could manipulate it to imitate stone or marble, blue lapis and reddish porphyry. Because terracotta is much lighter than stone or marble, it also allowed for more versatility. Most importantly, the sculptures had more visibility in darker areas of a house or chapel since the glaze reflects light rather than absorbs it, as with marble.

Why is the timing right for this show?

FM: In the US there is an amazing museum show in Boston this year that will then travel to Washington, DC that is dedicated to Della Robbia, bringing the subject to the public. And with the exhibition at Sotheby's, Della Robbia will be brought to New York as well.

MS: In addition to the museum shows, the timing is right because the market for Della Robbia sculptures has recently become much stronger and they are more in demand. At Sotheby’s we have offered some remarkable pieces within the last few years and they have fetched extremely strong prices. Collectors are beginning to associate with these colourful and graphic works much more than in the past. And I think that it is that luminosity that attracts buyers from all collecting areas.

Finally, I would like to think that there is nostalgia for the past perhaps as a reaction to our contemporary lives and imagery – maybe there is a yearning for tradition?

How did you select which works to include in Glazed?

FM: Subject, condition, quality. The show includes an incredible variety of works that together help illustrate how the Della Robbia workshop operated in Florence back then.

MS: It is Fabrizio’s collection and we discussed a few pieces that we decided not to include because they were repetitions. We also wanted to keep the group relatively small but ultimately it was fairly easy to choose these works of art!

How do you see these works fitting in the contemporary context?

MS: I think the saturated colours, the play of light on the shiny surfaces and the very simple forms are attractive to any collector and can complement any collection. There is a blend of secular and sacred images but even the sacred pieces are easy to understand. There is both a grace and humility to these works of art, which I find extremely appealing. Ultimately all of the works demonstrate the Della Robbias’ incredible talent with modelling clay. 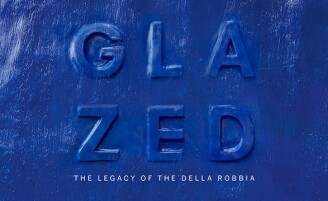