The City as Canvas: The Underground Birth of Graffiti in New York

T he unceasing hum of the New York subway enlivens, energizes and sustains the city. A symbol of modernization, connectivity and community, in the late 1970s and 1980s the snaking train lines of the MTA became an ideal creative hub for an entire generation of artist’s including figures such as Rammellzee, Keith Haring, Futura, Lee Quiñones, Zephyr, Fab Five Freddy and countless others, all of whose work is featured in this sale, Public Intervention: Art of the Street. The work of these artists, from hurriedly executed tags to spectacularly elaborate ten-car pieces, came to be as emblematic of New York as the Manhattan skyline itself. Rammellzee once described the subway as the “biggest gallery ever devised for distribution.” In constant circulation, unfiltered and uncensored, in one of the largest metropolises in the world, the subway disseminated the work of graffiti artists, leaving an indelible mark on the city, art history and popular culture at large.

An Urban Renaissance was underway. Graffiti writers used the city as their canvas and the streets and the underground exploded with vibrant color as graffiti culture advanced. Unfortunately, the city fought back, as mayor Ed Koch launched a crusade to “clean” the trains and criminalize the artists. While he was by no means the first to wage battle against street art - Mayor John Lindsay first declared a “War on Graffiti” as early as 1971 - Koch’s approach was somewhat more aggressive. One of his first actions was to station dogs and razor-wire around subway yards to deter the young artists from tagging the trains; he even went so far as to say, “If I had my way, I wouldn’t put in dogs, but wolves” (Quoted in New York Times, August 27, 1980). By no means deterred, even emboldened by these measures, the graffiti writers continued their work often using the tag ‘ART VS. TRANSIT’ to demonstrate their resilience in the face of adversity. In a 1995 interview between established graffiti artists including Rammellzee, Fab Five Freddie, Dondi, Zephyr and others with the former head of the MTA, Richard Ravitch, Rammellzee recounted his disappointment at the administration's handling of it all, saying, “The city had the opportunity to protect and to empower its homegrown cultural vanguard, but chose not to.”

“You’re standing there in the station, everything is gray and gloomy, and all of a sudden one of those graffiti trains slides in and brightens the place like a big bouquet from Latin America. At first it seems anarchical… Then you get used to it. The city is like a newspaper anyways, so it’s natural to see writing all over the place.”

Though under attack from city officials, street artists began to gain wider recognition from cultural institutions. In the summer of 1980, street art gallery Fashion Moda, founded in the South Bronx in 1978, and Collab, a collective of Lower East Side artists, staged the now famous “The Times Square Show”, which was the first exhibition to showcase graffiti writers alongside the Downtown “New Wave” avant-garde, becoming “the first radical art show of the eighties,” according to the Village Voice. The following year, Downtown personality Patti Astor opened the Fun Gallery, inviting graffiti writers to paint on canvases, bringing the art of the streets into the context of the traditional, albeit, funky gallery world. In these early years of the 1980s, exhibitions like “New York/New Wave” at PS1 in Queens curated by Diego Cortez and various artist-organized exhibitions at the Mudd Club, a hot spot for artists, cemented a link between the graffiti writers and “New Wave” artists such as Keith Haring, Kenny Scharf and Jean-Michel Basquiat.

The allure of graffiti expanded beyond gallery walls. In 1981, artist and cultural figure Fab Five Freddie introduced Debbie Harry, the front woman for Blondie, to graffiti and hip-hop culture. In Blondie’s single “Rapture”, which aired on MTV, Harry incorporated rapping into the song and featured Fab 5 and the artist Lee Quiñones tagging a wall in the video. In 1980, Fab Five Freddy, along with Lee Quiñones, created the legendary Campbell’s Soup train in reference to Andy Warhol’s famous series of the same subject. With this work, they asserted not only that graffiti was capable of engaging with mainstream art historical movements, but also actively inserting itself into that history. Shortly thereafter, two important films Style Wars and Wild Style brought graffiti writing to a massive audience. Taken together, these cultural moments helped to jetisen graffiti and hip-hop cultural to an international audience. 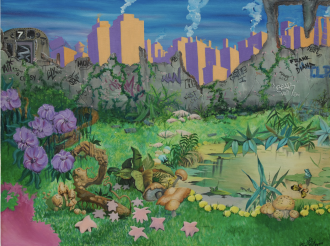 It is also perhaps to the credit of graffiti, the ubiquitous subway tags and maximalist, colorful compositions on subway cars, that ultimately led to a return to figuration, expressionism and neo-pop following the dominance of Minimalism in the 1960s and 70s in New York. Artists such as Frank Stella, Claes Oldenburg, Elizabeth Murray and countless others engaged with the urban environment and looked at these vibrant subway drawings that so poetically broke through the monotony of the increasingly concrete jungle. 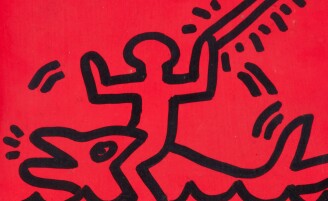