The Château de Pontchartrain: a Repository of History

W hat is the common denominator of an assemblage of personalities as dissimilar as a chancellor of Louis XIV, a flamboyant Second Empire courtesan, a fabulously wealthy Peruvian marquise and a star New York filmmaker? A château. Namely, the château of Pontchartrain which, over the course of more than three centuries, has witnessed a succession of powerful men and women reigning not only over politics but also over the highest spheres of society. Classed as a Historic Monument in 1979, the château – whose original design is attributed to François Mansart – and its park laid out by André Le Nôtre form a whole that has much to tell us of the splendours of its history.

In the early 17th century, Henri de Buade de Frontenac sold his château to a royal councillor, Paul Phélypeaux (1569-1621), who settled there, only about twenty kilometres from Versailles and the court. Over two centuries, the history of the Phélypeaux family would remain closely tied to that of Pontchartrain. It is accepted that his son, Louis I Phélypeaux (1613-1685), commissioned the architect François Mansart (1598-1666) to reconstruct the main buildings. In 1693, his son, Louis II Phélypeaux (1643-1727), known as the ‘Chancellor of Pontchartrain’, entrusted the design of the park to André Le Nôtre (1613-1700), which was one of his final projects.

The two superb views by Pierre-Denis Martin (1663-1742) offered in this sale attest in meticulous detail to the splendour of the greenery that surrounded the castle at the beginning of the eighteenth century. Upon the death of Jean-Frédéric Phélypeaux de Maurepas (1701-1781), grandson of Louis II, who was childless, the estate reverted to his niece, the daughter of the Duke of Nevers. She married Duke Louis Hercule Timoléon de Cossé-Brissac (1734-1792), Commander in chief of the Constitutional Guard of Louis XVI, who was condemned for his ‘unconstitutional and counterrevolutionary spirit’ and summarily executed.

The château was purchased in 1801 by Claude-Xavier Carvillon des Tillières (1748-1814), a financier and speculator who profited from the opportunities offered by the Revolution by buying up the treasures abandoned by the nobility at knockdown prices. He entrusted Louis-Martin Berthault (1770-1823) – who later distinguished himself with his work on the château of Saint-Leu for Queen Hortense and Louis Bonaparte (1805), the château of La Petite Malmaison for the Empress Josephine (1807), and the splendid townhouse of Baron James de Rothschild in rue Laffitte (1820-1825), – with the task of transforming the gardens à la française into an English-style park.

The daughter of Carvillon de Tillières, Aimée (1797-1853), future wife of the Marquis Rainulphe d’Osmond (1788-1862), inherited the château. Pontchartrain once again became the meeting place of a brilliant society under the aegis of the Marquise d’Osmond, a woman of wit and taste. The painter Jean-Baptiste Isabey (1767-1855) was a frequent visitor at Pontchartrain where he painted the family’s portraits.

In 1857, the Prussian count Guido Henckel von Donnersmarck (1830-1916) acquired Pontchartrain for his mistress, the celebrated courtesan Esther Lachmann (1819-1884), dubbed ‘La Païva’. The count entrusted the restoration of the château to Pierre Manguin, who had previously constructed La Païva’s dazzlingly luxurious Paris townhouse on the avenue des Champs-Elysées. The account books and inventories figuring in this sale attest to the extreme opulence of the courtesan’s residences (lot 20).

Donnersmarck was appointed governor of Lorraine, which had been annexed by Prussia not long after his marriage to La Païva. La Païva herself, who moved in wealthy Parisian circles, contributed to the reimbursement of the war damages imposed on France and pursued her political engagement as far as the Franco-Prussian post-war negotiations, even receiving the republican Léon Gambetta (1838-1882) at Pontchartrain. Suspected of espionage by the French government, La Païva was condemned to exile in 1877.

Auguste Dreyfus (1827-1897), called in his lifetime ‘the richest man in the world’, purchased Pontchartrain in 1888. He married the Marquise of Villahermosa (1847-1924), a Peruvian aristocrat, who instituted an art of living worthy of a royal court. The very worldly Gabriel-Louis Pringué (1885-1965) said of Pontchartrain, ‘More a palace than a château in appearance, its fixtures and fittings and the truly fabulous lifestyle led by the Marquise […] recall the lives of the Spanish grandees in Madrid […]’ (cf. G.-L. Pringué, 30 ans de dîners en ville, Paris, 1948, pp. 161-164). Emile Boeswillwald was charged with enlarging and renovating the château and Achille Duchêne with restoring the park to its original French layout. The Dreyfus-Villahermosa children sold the château in 1932. It has since remained in the same family by descent.

A place of inspiration

From François Mansart to André Le Nôtre, by way of Eugène Isabey or Théophile Gautier, the ‘dear Théo’ to whom La Païva wrote on 9 September 1867, ‘After loads of tribulations, here I finally am at Pontchartrain. When will you do me the pleasure of settling here?’ (cf. C. Lacoste-Veyssyre (ed.), Théophile Gautier. Correspondances générales 1865-1867, Paris, 1995, p. 446), the château of Pontchartrain has not ceased to attract artists and their patrons. Even today this repository of history continues to inspire and several scenes of Sofia Coppola’s film Marie Antoinette, which won the Palme d’or at Cannes in 2006, were filmed in the grand gallery.

Sotheby’s is honoured to present this ensemble of sculptures and paintings that attest to the refined taste of the illustrious owners who have lived in this historic residence. Entering the octagonal salon, at one of the ends of the grand gallery, the powerful bust of Neptune attributed to the workshop of Antoine Coysevox takes the visitor back to the time of Louis XIV (lot 24).

He remains there upon entering the billiards room, dominated by the two Views of the château of Pontchartrain and its park landscaped by Le Nôtre, spectacular topographical paintings by Pierre-Denis Martin, known as Martin des Gobelins (lot 18). Drawn in by the violent A Storm in a Bay by Claude-Joseph Vernet, in one of the château’s bedrooms, the visitor is projected onto the shores of 1764 (lot 26) before pursuing his imaginary voyage in the dining room where a Young faun and bacchante straight from the chisel of Georges Jacquot invite him to the sumptuous banquets of a courtesan (lot 40).

Also from the château of Pontchartrain, an impressive northern European gilt bronze and cut glass chandelier made around 1800, and an imposing Empire mahogany bed decorated with precious gilt bronzes will be presented by Sotheby’s on the same day in the Excellence sale (lots 122 and 123). 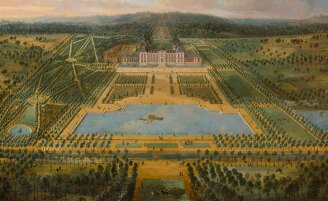 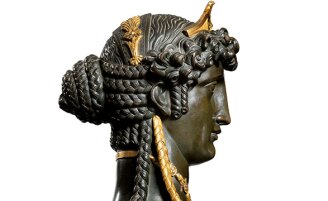