The Artistry and Style of 18th Century Gilt Bronze

T he numerous gilt bronze objects that we have in this collection reflect the exacting standards that motivated this collector in his quest. The selection is flawless and the objects stand out by their rarity and originality. They pay an implicit homage to the savoir-faire and creativity of the craftsmen who made them and provide us with a panorama of the artistry of works in bronze in 18th century France.

The wall lights (lot 11), typical of early 18th century production, are notable for their imposing size, each with a slim chiseled backplate adorned in the center by the head of a faun from which a single light branch emerges. The candelabra (lot 19), designed to hold six candles, stand out by the finesse of the model and the variety of their ornamentation. In the style of Louis XIV, they were commercialized between 1745 and 1749, as proven by the mark of the stamp with a crowned C on the base.

The wall lights engraved with Chinese writing (lot 67) are a rare and surprising model whose design is perfectly mastered, like those that were chosen by the Earl of Coventry (lot 91), which symbolize the classical revival.

The Louis XVI wall lights (lot 115), in spite of their apparent simplicity, were in fact chosen as the model to illustrate the trademark label used for Lannuier’s “Au Prince de Condé”.

On the Meissen porcelain glass coolers, bronze is used as an accessory; it both embellishes and protects the object. The bronze mounts on these coolers are perfectly matched with the precious quality of the porcelain. They protect the edges of the rim while making it easier to hold by the addition of foliage-decorated handles.

On the charming little Meissen porcelain jar with cover (lot 65), the joint between the lid and the jar is made of a very thin gilt-bronze border subtly decorated with rocaille motifs.

To observe the extraordinary quality of mercury gilding, one can turn to the Louis XV candelabra (lot 60), the wall lights with the Chinese lettering (lot 67) or the ones attributed to Philippe Caffiéri (lot 91). The discreet pinkish effects, caused by the oxidation of mercury on the gold that has been deposited on the bronze, is always an enchantment for amateurs of gilt-bronze. The pyramid-shaped chenets (lot 18) are a perfect example. The person casting the bronze has intentionally left the back part in its untouched state, thus sparing the chaser work that would have remained hidden. The gilder naturally followed this same approach, saving the precious gold, which would have only been enjoyed by the flames of the fire itself.

Among the furniture, the athénienne in giltwood and gilded bronze from Jacques Doucet's collection (lot 93) is a true tour de force that makes of it an exceptional piece. The base is made of carved giltwood while the bowl and its various covers are made of gilt bronze. The bronze work is remarkable, with a piastre-decorated frieze superimposed on the bowl that is perfectly smooth and burnished.

The acanthus leaves of the upper elements are intermingled and the handles with their markedly clean angles complete this technical and aesthetic achievement. 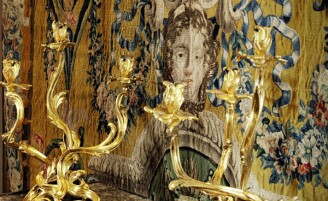