As Keith Haring’s Untitled (Twenty-Three Works) comes to auction in Hong Kong, the piece’s owner, the renowned photographer David LaChapelle, spoke with the auction’s curator, Korean pop sensation T.O.P, to discuss the impact of Haring’s work past and present, and their respective passions for collecting art.

T.O.P: What qualities in Keith Haring’s work appeals to you?

David LaChapelle: Keith Haring made art for everyone. Like no other before him, he could go from street to museum seamlessly and his work was as vital in each context. He was highly intellectual but worked intuitively, a dancer with music and a brush. The planet was his canvas and no one was left out unless they chose themselves to be. He was joyful and profound, celebrated life and used his art as a sonic boom box, blasting against social and political wrongs. He lived more in thirty years than most would do if given three hundred.

T.O.P: Looking at your work growing up, I always saw a link between art, music, fashion, photography, design, cinema, youth and street cultures, in your practice. It’s interesting that Haring also embraced these ‘sub-cultures’ – could you tell us a little more about your interaction with him?

DL: We created, danced, and lived in the same downtown art circles, which, in the 1980s was the East village and Soho. It was a much smaller and underground scene then. Keith was a doorman at Mud Club when I first met him. The other door guys wouldn't let us in, because we were obviously under age but this guy in hand painted 1950s nerd glasses with black and DayGlo stripes really went out of his way to let us in to dance. He was really kind and it wasn't until years later I would find out that it was the same guy who let us in that was doing these amazing charcoal drawings that literally wallpapered the subway lines under New York.

Tseng Kwong Chi was printing photos of Keith next to me in this rental dark room and that’s when I saw the guy at the door from Mud Club beside his subway drawings that had everyone's attention and awe. Keith also was an intern at Tony Shafrazi gallery and he stayed with Tony his whole life. I had been showing with Tony's gallery also and you just didn't see many artists staying at one gallery. They moved a lot in the 1980s but not Keith. Together Tony and Keith were unstoppable, an amazing team, supernovas who literally took over the world. Keith became a global phenomenon. So generous, with the Pop Shop which allowed the young and people without a lot of money to afford art. It was an open door into the art world that made it accessible, fun, and not intimidating like many galleries. He was ahead of his time, he belonged to the streets and the future.

T.O.P: Through your collecting of art, has that fuelled your creativity or influenced your work?

DL: Collecting art has been very personal and I have focused on only works by artists I adore or who touched me in some way and inspire me, from Andy Warhol, my first boss, to William Blake. I spend most of my time now in the forest in east Maui so Haring’s work sits in a dark house in Los Angeles, which is no place for great art. It needs to be seen. The art that I see here in Maui are the jungle, the sky and the sea. Valuable works on canvas or paper are not fit for the humidity here, so I must release them to find better homes. Besides we are only temporary caretakers of art I have been so happy to live with these masters around me, but as I spend more time on the island I feel right to let someone else have them now.

T.O.P: It is a fine line between the two and as a creative mind and collector like myself, when does the artist end and the collector begin for you?

DL: I feel we want to enjoy what we love. If we are artists, we love artists. It’s natural that we want to be around art.

T.O.P: As someone who has collaborated with some of the most famous people in our world today, how would you define an icon?

DL: Keith Haring's ability to embrace and hold the whole world’s attention to this day and to be a major influence on young artists cements his contribution to global culture. His work is the definition of iconic. 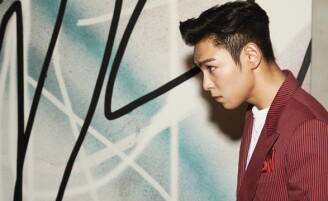