By Christian House
This is the first installment of our 10 Great Leaps of Innovation Series, created to celebrate Sotheby's 275th Anniversary.

B uyers at our most recent Contemporary Art Evening sale, watched Oliver Barker, Chairman of Sotheby’s Europe, seamlessly and swiftly bring the gavel down on 68 lots. They might have paused to consider the labours of the company’s founder, Samuel Baker. 275 years ago, Sam stepped onto the rostrum for his first auction. He had 457 lots ahead of him – “Books in all branches of Polite Literature” from the collection of the Irish politician Sir John Stanley. It took ten evenings to complete.

Sam was a seasoned bookseller and entrepreneur of considerable imagination. He was still in his early twenties when he transformed his business selling antiquarian and rare books – in the noisy taverns off the Strand in London – into a professional auction house.

He garnered a reputation for offering the most important and noble libraries of the 18th century, collections formed by clergymen, statesmen, industrialists, even the British Museum. The lots broached academic, legal, medical, classical and religious subjects, but also the arcane and obscure (one assumes that The Art of Being Easy at all Times, sold in 1756, was an early self-help book).

The duration of Sam’s first auction was modest compared to the epic events to follow. For example, in 1754 there was the sale of 10,000 books and manuscripts owned by Dr Richard Mead, physician to King George II, sold over two months of auctions. On that occasion, one of the successful buyers was Louis XV of France, who purchased a 1469 edition of Pliny’s Naturalis Historia.

The book world of the 18th century was a genial affair. In his illuminating and amusing history, Sotheby’s: Portrait of an Auction House, Frank Herrmann describes these early auctions as happy hubs, full of bibliophiles “exchanging the latest gossip, reading the newspapers, collecting post, wining and dining.”

Baker fitted in perfectly, he was known in the trade as a robust, cheerful fellow who hammered down his lots with an ivory hammer. He was also a publisher, stationer and designed his own country house in the home counties. He was, in short, a great success.

Sam Baker died in the spring of 1778 and was laid to rest in St Paul’s Church in Covent Garden. The churchyard sits a short walk from the Angel and Crown, the ale house on Russell Street where as a young man he had set up stall as a bookseller (and enjoyed a tankard). Sam and his wife, Rebecca, had no children of their own and so Baker left his business, in part, to his loved and trusted nephew. His name was John Sotheby, the first of a number of family members from which the company today takes its name. 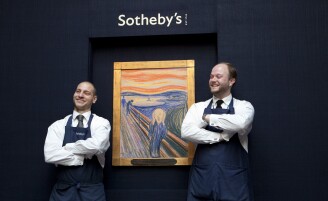