I vividly remember visiting Alfonso Ossorio at his estate at the Creeks in East Hampton. It was probably sometime in the very late 1970s, when Julian Schnabel was enjoying his first phase of artistic notoriety. Schnabel had recently been to see Ossorio, and his name was mentioned (and neatly dismissed) in the course of my conversation with Ossorio and his companion Ted Dragon. For example. when the subject of Schnabel’s collage paintings made with broken plates came up, Ossorio, who had made works with a certain similarity a few years earlier (see the examples here), smiled sweetly and said: ‘Oh yes, he told me what adhesive he uses. They’re all going to fall apart.’

In those days, and since, there was, and still is, some doubt as to how Ossorio should be categorised. Was he primarily important as a pioneer collector, notably of the work of Jackson Pollock, who had been his friend, and then of Dubuffet, and other European practitioners of Art Brut? Or was he important as a creative power in his own right? One got the impression that Schnabel had adopted a rather patronising attitude to his hosts. This had clearly been a tactical mistake.

In fact, as this carefully selected exhibition demonstrates, Ossorio has every right to be considered as an important actor in the story of what happened to art in the decades following World War II.

He was both an insider and an outsider. He came from a wealthy Filipino family, and was of mixed heritage – Spanish, Filipino and Chinese. He had formed very early links to the Abstract Expressionist Movement, many of whose most important participants were immigrants to America like himself, though he had material advantages that were denied to most of the other big names. Curiously enough, however, Pollock, the major member of the Ab-Ex movement with whom he got on best, was in fact the most thoroughly and indubitably American of the lot – a non-immigrant, unlike, for example, Mark Rothko.

His Spanish surname suggested possible links with Latin America, but in fact these didn’t exist. He was, however, cosmopolitan enough to slot very easily into the immediately post-war art world in Paris, as this began to revive. Ossorio went to Paris to meet Dubuffet in 1950, the year before he bought his big estate at the Creeks, where he spent the rest of his life, and the extensive acreage there became a home for Dubuffet’s Art Brut collection.

Ossorio’s own work shows strong traces of Dubuffet’s influence, as well as of influence from Pollock. Pollock appears clearly enough, for example, in the painting Persistence, dated 1950, with its tangle of looping lines. But Sing for Your Supper, from the next year, is very different in its presentation of two figures – one quasi-human, the other a bird. The looping lines are still present, but they are subordinated to larger, representational forms. The male profile, facing right, would be at home in Dubuffet’s work.

I think one can detect several factors at work here. Because Ossorio was independently wealthy, he could please himself. He had no need to conform to whatever stylistic rules might be in force at the moment when a particular work was being made.

He also benefited from belonging to no particular cultural group. He lived and worked, certainly during the first twenty years of his career as an artist, during a period when the art world was a much smaller place than it is now. In many ways his nearest equivalent was perhaps Wifredo Lam – a Cuban of Chinese, Amerindian and African ancestry, who found a home for his art within the broad confines of the International Surrealist Movement. Both were quintessential; insider-outsiders.

Ossorio’s most radical works are his assemblages. Examples here are Mother and Child (1972) and Port Adain (also 1972). The materials these two compositions are made from are completely heterogeneous, but separate parts – for example the doll’s head and the tribal mask in Mother and Child – retain stubbornly separate identities of their own.

In fact Ossorio’s great strength as an artist lies in his ability to conflate different cultures, without being absolutely the client or prisoner of any of them.

Looking at him now, nearly a quarter of a century after his death, what strikes one most of all is his sinuously sophisticated cosmopolitanism. He is not an Abstract Expressionist. He is not a Surrealist (despite the suggested comparison to Lam). He is not simply a disciple of Dubuffet’s Art Brut.

He is all of these things and none of these things, just as the moment offers. He is in fact one of the real unclassifiables of mid-20th century art – very much a player, but unwilling to sacrifice his identity to any concise description.
Edward Lucie-Smith is a regular contributor to The London Magazine as well as the author of more than a hundred books in all, including a biography of Joan of Arc, a historical novel, and more than sixty books about art, chiefly but not exclusively about contemporary work. 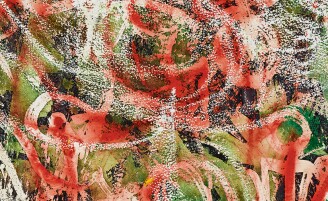