Remembering 50 Years of Sotheby's in Italy

By Sotheby's
To celebrate 50 years in Italy, Sotheby's has curated a unique and special exhibition of masterpieces deemed by the Ministry of Cultural Heritage to be assets of national interest, ensuring they never went under the hammer. In an extract from Sotheby's Maestro: Peter Wilson and the Post-War Art World, Jonathan Mennell, former Director of the Rome office and founder of Trinity Fine Art, looks back at Sotheby's first years in Italy and his first meeting with Sotheby's chairman Peter Wilson.

P eter’s father, Mathew “Scatters” Wilson, was a friend of my great uncle, Robert, Lord Vansittart, permanent under-secretary at the Foreign Office in the 1930s. Robert, or Van as he was known, would leave his wife Sarita knitting in the back of the Rolls Royce while he would play cards with “Scatters” in their club.

A generation later, PCW had a global plan for Sotheby’s to set up offices across Europe, including Italy; and so, aged 21, I was employed as a general dogsbody in the Florence office. Carmen Gronau, who had headed the Old Master Painting department in London, had retired near Florence to a villa left to her by her husband Hans; the office had been created for her to keep her away from London and have an occupation that would keep her busy in her retirement.

I soon became the only person in the office able to perform the visits, valuations and, with the help of London colleagues and especially John Winter who was in charge of the Italian operations from London, catalogue the sales.

My first memory of Peter was of collecting him from the Florence train station in the official office car: a second-hand Fiat 500. I had to open the roof so Peter’s head could fit. I had strict orders to take him straight to San Domenico to lunch with Carmen. She had told me that he had no interest in seeing the exhibition that I had put on and was closing that day. I thought that was strange and since the exhibition was our biggest to date I was intent on Peter seeing venue. While driving I stood up, put my head through the roof and exclaimed, “I thought you would like to see the exhibition sir.” To which he replied, “Of course, that is why I came.”

Carmen never forgave me for having disobeyed her, as Peter understood that someone had done all the work and it was certainly not Carmen. As we walked round the exhibition he interrogated me on many of the paintings, sculpture and works of art and I suddenly realised that I had not looked at the works properly. He had an uncanny understanding of what he was looking at and I learned a very important lesson that day. His knowledge and curiosity was truly 360 degrees. Strangely enough the only other person I experienced who had this ability of fully understanding works of art was the artist Cy Twombly. Seeing him holding a large Renaissance bronze in his hand was a humbling experience. You saw in a flash that there was some kind of communication between the object and the artist.

PCW and I met again when I was seconded to help with the first Monte Carlo auction, the Baron du Redé sale in 1975. I was surprised to find myself together with Peter and Graham Lewellyn preparing the saleroom by pushing all the chairs into neat rows. We had no other help and in those days anyone on hand just got down to the work.

Peter’s auctioning techniques proved to be a revelation. He seemed to have such a gentle but psychological way of eliciting bids out of collectors; just as they thought the hammer would drop, he would look away and gently abandon that person while he would take another bid, only to look back, pick them up again with his eyes and entice another offer.

His suave approach was rudely interrupted by the self-important French Huissier, a local bureaucrat with no interest or understanding of the art of auctioning. She was bored and would rudely interrupt Peter by saying in a loud voice “C’est bien vous, c’est bien vous” and loudly drop the hammer. Sotheby’s was licensed to hold auctions, but could not legally drop the hammer and so create an actual sale.

Peter loved Italy and, after I had proved that it was in Sotheby’s interest to open a Rome office, came at my bequest to vet my choice of office. I duly restored the old stables of Palazzo Taverna just across the Tiber from Castel Sant’Angelo and we were soon open for business.

In 1983 Peter rang me to say that Mona Bismarck had died and that he did not know who the executor was, since he had fallen out with Mona some years before. Peter knew that I had an elderly cousin called Marchese Tony Mattei who had been a close friend of Mona. I rang Tony who told me to ring the porter of the Grand Hotel in Naples, that he would surely know. I duly called and was thus able to put Peter in touch with the executor, and Peter in turn secured the world auction rights for the Bismarck property. Mona left a handsome legacy to the porter of the Grand Hotel.

Sadly, the new financial wizards employed to manage the firm from the mid-1970s did not share Peter’s enthusiasm for Italy. In 1975 Sotheby’s Florence organised the sale of the contents of Palazzo Serristori, a wonderful collection in a grand palace on the banks of the Arno. However, the authorities managed to cancel the sale at the last minute. Sotheby’s was given the option of acquiring the palace for a mere £700,000 and the contents for the same amount.

It was the chance of a lifetime and Sotheby’s would have become overnight the principal auctioneer in Italy. But the new London team of bankers said no. With this act of blindness, I realised that I would not have a very long career with Sotheby’s. And so in 1984, together with John Winter and Jock Palmer, a porcelain and maiolica expert, we set up Trinity Fine Art.

Sotheby's Maestro: Peter Wilson and the Post-War Art World, edited by Katherine MacLean and Philip Hook, is available from Sotheby's. 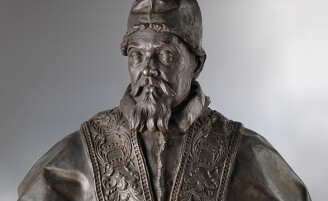