Pablo Picasso, George Condo & The Art of the Steal

There is good reason why the adage 'good artists copy, great artists steal' has so often been attributed to Pablo Picasso. Though remembered for his innovative styles, Picasso was an admitted disciple of the great artists of the past and a careful observer of his contemporaries. Throughout his career, Picasso astutely incorporated elements from these influences into his body of work. Learning from the master, George Condo has, in turn, mined the Spanish artist’s own extraordinary oeuvre for inspiration. In Sotheby’s Sl2 Hong Kong’s Face-Off: Picasso/ Condo (16–31 March) an outstanding selection of works by Picasso and Condo stages a dialogue between the artists and reveals the overlaps and distinctions in their practices.

Perhaps Picasso’s most significant influence on Condo was his adoption of wide-ranging artistic quotation. Picasso maintained a reverential admiration for both Goya and Diego Velázquez throughout his years. His appreciation was embodied most overtly in his adaptation of Velázquez’s paradigmatic Las Meninas, which he reinterpreted in 1957. Picasso looked to his peers as well and engaged in a friendly artistic rivalry with both Henri Matisse and Paul Cézanne, each adopting attributes of the others’ work.

Condo's work too references a deep knowledge of art history, as well as myriad influences — from Pop Art to graffiti and Disney cartoon characters. Studying Picasso’s work while a young painter living in Paris in the late 1980s and early 1990s, Condo absorbed much of Picasso’s pictorial grammar, perhaps most evident in his Spanish Head Composition (1988) in the collection of the Museum of Modern Art, New York. Similarly to Picasso's relationship to Goya and Velázquez, Condo enages Picasso's imposing legacy to create an aesthetic identity and painterly legacy entirely and unapologetically his own.

Underlying both artists’ careers is a persistent reinvestigation of the genre of the possibilities of portraiture. Picasso in his time, and Condo, in the contemporary era, took this tradition in decline and reinvigorated it. For both this confrontation was not a process of destruction, but one of celebration, reverence, and progression. Within the conventionally established parameters of classical portraiture, these artists innovated from the inside out.

Picasso’s stunning Femme dans un Fauteuil (Dora Maar) (1941) and Condo’s Princess (2008) similarly framed in a deliberately classical fashion: in each, the sitter is shown in three-quarter profile, a standard for portraiture dating back to the Renaissance.  Both artists have collapsed identifiable background space – Picasso in favor of a rough geometric rendering of a walled space and Condo – a fully abstracted tonal background.

For all their similarities, the selection of their subjects is fundamentally different: Picasso worked from an intimate group of close contacts, family members, lovers; Condo’s subjects are invented figures inspired by contemporary culture. Picasso refused to work on commission, rather choosing to depict people he knew personally, which allowed him to take a more expressive and radical approach to capturing his subjects.

Alongside the numerous and diverse depictions Picasso executed of the women in his life – from loving portraits of his young daughter, as in the vibrant 1938 canvas Maya Au Bateau (Maya with a boat), to more complex portrayals of his famous lovers – Femme dans un Fauteuil (Dora Maar) (1941) and Tete de Marie-Therese (1934) among them – he also made a large number of humorous portraits and sketches of friends and leading figures of the day.

Condo, on the other hand, selects his subjects from a cast of characters that he has invented, but who have vague echoes in reality. He refers to the process as ‘Artificial Realism’, and describes it as the creation of a realistic representation of that which is artificial. A Condo portrait such as Father O'Malley (The Priest) (2004) challenges viewers to identify the line between fact and fiction, between what Condo has invented in his own mind and what that invention is communicating from lived experience. Whereas Picasso’s subjects convey the artist’s insights into their individual natures, Condo’s fabricated sitters become ciphers for our own complex feelings about humanity and humanness.

The undeniable breadth and brilliance of Pablo Picasso’s body of work and the continued originality and wit of George Condo’s oeuvre have set these two figures apart in their own eras while uniting them across time. 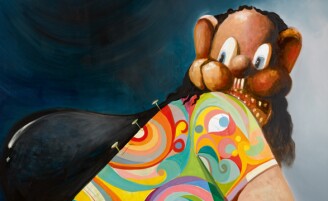