Out of Obscurity: The Life and Work of Pierre Chareau

Looking at the exquisite glass block walls of Maison de Verre (or 'Glass House') in Paris, it’s difficult to imagine why the work of designer and architect, Pierre Chareau, didn't garner more celebration while he was still alive. As the opening of the first ever Chareau retrospective in the US is about to launch at the Jewish Museum in New York and a selection of his works are to be sold in the Henri Chwast: A Collection Out of Sight auction at Sotheby’s Paris this month, Chareau is finally having a moment. We take a look at the somewhat overlooked oeuvre of this design luminary.

Pierre Chareau was born in 1883 in Bordeaux into a family of Jewish shipbuilders. After deliberating over several career paths including painting and music, he went on to study architecture at the renowned Ecole des Beaux-Arts in Paris. After graduating in 1908, Chareau worked for a British furnishings company based in Paris, before starting a number of small-scale interior projects. One of the first projects Chareau completed, a design of a study/bedroom for his friend Dr Jean Dalsace, was exhibited by the annual Salon d'Automne show in Paris, which spurred him on to design more furniture and lighting fixtures. In the following decade, Dalsace would go on to commission Chareau to create the work of his career.

Later in 1925, Chareau designed an "Office-Library in the French Embassy" for the Pavillion de la Société des Artistes Décorateurs, an arts society that Chareau himself was a member of. This commission was then selected by the revered Exposition Internationale des Arts Décoratifs et Industriels Modernes in Paris, contributing to Chareau's growing reputation as a key figure in the Twentieth Century decorative arts movement, in France at least.

A unifying trait of Chareau's work was his unusual combination of materials. Adopting a Modernist approach to his furniture, lighting and architectural designs, Chareau created asymmetric, rigid desks in rosewood and heavy iron and mechanical floor lamps in mahogany, alabaster and metal. It was this pioneering juxtaposition of an opulent French decorative arts sensibility with the industrial materials and clean lines of Modernism that would define the apotheosis of his career.

Maison de Verre is widely regarded as Chareau's most important work, which he designed in collaboration with Dutch architect Bernard Bijvoet and metalworker Louis Dalbet. Created for his friend and now loyal client, Dr Jean Dalsace and his wife Annie, the upper floors of the building were to serve as a home and the ground floor was to be the gynaecologist's practice. Chareau’s remarkably engineered interior décor included sliding soundproof doors, adjustable metal screens, smooth rolling ladders and retractable staircases. His forward-thinking furniture designs included a desk with a retractable table top, created so that the space between doctor and patient could be decreased during more sensitive conversations. Chareau’s innovative lighting designs were a huge feature too. A private telephone booth designed for Dr Jean featured an automatic light that turned on when he entered and off when he exited.

The glass house was completed in 1931 and Chareau continued designing bespoke furniture and interiors for an exclusive clientele which included key figures of the French-Jewish intelligentsia.

Chareau was an avid art collector. He owned works by Mondrian, Picasso and Modigliani but when the Second World War broke out in 1939, Chareau was forced into exile by the Nazis and sold his collection before relocating to New York, where he attempted to rebuild his career throughout the 1940s. In 1950, the designer pitched a solo show of his works to the Museum of Modern Art, but was rejected. He died later that year.

Was it his uprooting that halted Chareau's ascent? For Richard Aronowitz, European Head of Restitution at Sotheby’s London,''Pierre Chareau was one of a number of notable French-Jewish designers who had to flee the threat of Nazism after the occupation of France by the Germans in 1940, perhaps the most famous of whom was Jean-Michel Frank. That Chareau's work has long lain in relative, and underserved, obscurity is in no little part to do with his enforced displacement.''

Whether or not Chareau’s legacy would have burned brighter had he been able to remain in his native France, is impossible to say. Regardless, his designs feel more relevant today than ever. With the upcoming retrospective at New York’s Jewish Museum, Chareau is finally getting the solo show he deserves. 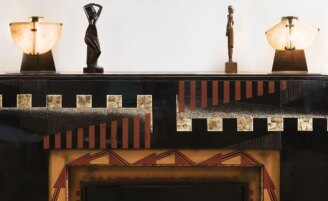