By Sotheby's
Among the Most Famous Subjects in Art History, Le Bassin aux Nympheas was Painted in 1917-19 at Monet's Home in Giverny and was Conceived as Part of the Artist's Celebrated Grandes Decorations Series

O ne of Claude Monet's finest large-scale Water Lilies paintings ever to appear at auction will star in Sotheby's Impressionist & Modern Art Evening Sale on 12 May in New York. Le Bassin aux Nympheas stands among the most iconic and celebrated Impressionist images.

Measuring nearly 40 by 79 inches, this enrapturing canvas from 1917-19 was conceived as part of the artist's legendary series of monumental paintings depicting his water lily pond at Giverny, the Grandes Decorations, which he began in 1914 and examples of which can be found today in the Musee de l'Orangerie in Paris and The Museum of Modern Art in New York. The series took Monet's paintings of the tranquil lily pond in a radical new direction and were twice the size of his earlier Water Lilies.

"As a remarkable example of Monet's late period works from his cherished home at Giverny, this monumental painting beautifully encapsulates how Monet's oeuvre evolved over time from his Impressionist breakthroughs to a more abstract focus with his preoccupation of his pond and water lilies."

Ground-breaking in their nearly abstract treatment of the pond water's surface and its reflections, these late works are recognized as an important bridge between Impressionism and Abstract Expressionism, as practised by Abstract Expressionist artists such as Jackson Pollock and Mark Rothko, several generations later. 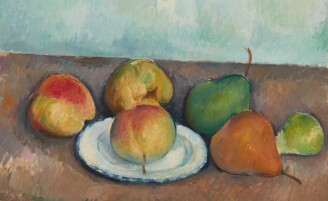 With exceptional provenance, including the collection of famed Hollywood and Broadway producer, Ray Stark and his wife Fran, this masterwork will go on view in Taipei beginning 26 April before returning to our York Avenue galleries for exhibition by appointment beginning 1 May.

T he water lily pond was the defining motif of the last two­ and-a-half decades of Monet's life and stands among the most iconic and celebrated of all Impressionist paintings. The profound impact the series has made on the evolution of Modern Art renders them

Monet's greatest achievement. The famous lily pond in his garden at Giverny provided the subject matter for most of the artist's major late works, recording the changes in his style and constant pictorial innovations.

How this beautiful and visually dynamic subject came to be the focus of Monet's artistic output can be traced back to 1883, when the artist moved to Giverny where he rented a house with a large garden. Thanks to his ever-increasing financial success, Monet was able to buy the property in the early 1890s and eventually purchased a large adjacent plot of land. It was here in 1893 that, with enormous vigour and determination, Monet swiftly set about transforming the gardens and creating a large pond. There were initially a number of complaints about his plans to divert the river Epte through his garden in order to feed his new pond, which he had to address in his application to the Prefet of the Eure department.

"Opportunities to acquire paintings by Monet of this importance are rare indeed - this is one of the first large-scale Nympheas to appear on the market in a number of years."

After the turn of the century, the gardens around Monet's Giverny home became the central theme of his work. During 1901-02, Monet enlarged the pond, replanted the edges with bamboo, rhododendron, Japanese apple and cherry trees. Once discovered, the subject of water lilies offered a wealth of inspiration that the artist continued to explore for several decades. The carefully designed garden presented the artist with a microcosmos in which he could observe and paint the changes in weather, season and time of day, as well as the ever-changing colors and patterns. Monet produced series of paintings on the themes of the Japanese footbridge and the water lilies, paying exacting attention to the details of the garden, including maintaining the pond and plants in a perfect state for painting. Towards the end of his life, Monet told a visitor to his studio "It took me some time to understand my water lilies. I planted them purely for pleasure; I grew them with no thought of painting them. A landscape takes more than a day to get under your skin. And then, all at once, I had the revelation - how wonderful my pond was - and reached for my palette. I've hardly had any other subject since that moment."

In 1914, Monet began work on his Grandes Decorations, a sequence of monumental paintings of the gardens that would take his depictions of the water lily pond in a radical new direction. That same year, after constructing an enormous garden that could surround him while he worked, Monet conceived of a group of paintings that would similarly envelop the viewer in a peaceful environment. At this scale, Monet surrounded the viewer with multiple depictions of the lily pond, allowing the shifting colors of the water's reflections during the course of the day to create a nearly abstract environment of aqueous sensations.

Le Bassin aux Nympheas was painted as Monet worked on the Grandes Decorations, examples of which can be found in the Musee de l'Orangerie in Paris and The Museum of Modern Art in New York. In this monumental scale, Monet moved further away from a realistic depiction of the lily pond as the viewer is brought closer to the surface of the pond, seemingly hovering above the shifting colors of the pond's reflections. Monet's palette is more vibrant than in his earlier Water Li/lies series, and the handling is decidedly more fluid, with flowers indicated by bold strokes of paint. This heightened sense of the pond's surface also emphasizes the surface of the painting as Monet's dazzling strokes of paint move back and forth, like the reflections of the lily pond, between the ripples in the water. The large scale of the present work suggests that although it may have been conceived outside, it was almost certainly painted in the large studio that Monet had built expressly for the purpose of accommodating the Grandes Decorations. Monet's conception at this point was not to depict the actual pond, but to surround the viewer with the "water surface with no horizon and no shore," an effect the present work achieves with its striking scale and presence.

This extraordinary painting is a powerful testament to Monet's enduring vision and creativity in his mature years. The lasting legacy of his late work is most clearly seen in the art of the Abstract Expressionists, such as Mark Rothko, Clyfford Still, Jackson Pollock and Sam Francis, whose bold color planes and rejection of figuration is foreshadowed by the Nympheas.