Liu Ye, the Metaphorical Window, and Poetics of Painting

“First of all, on the surface which I am going to paint, I draw a rectangle of whatever size I want, which I regard as an open window through which the subject to be painted is seen.”

The window has an enduring presence in art history. A metaphorical portal into liminal spaces, the window has been long employed to invoke a dialogue between perceptual and intellectual vision. These connections bridge the realistic world with spiritual or imagined realms.

Liu Ye’s Mondrian and Angel invites powerful associations with the trope of painting as windows to an alternate world. Depicting actual and symbolic windows, the exquisite Mondrian and Angel diffracts multiple views of conceptual and imagined reality.

In the upper-centre of the composition Liu Ye incorporates a reference to the founder of Neo-Plasticism, with the work Piet Mondrian half-bathed in the intense yellow light of afternoon sun. In the foreground, a winged cherub in contrapposto stance peers through binoculars out a window, of which only one edge is shown.

The image of the cherub brings to mind a certain Renaissance notion, comparing the painting and the window as analogous frames through which viewers see the world. The Mondrian painting functions as an allegorical window, while the composition itself, carefully orchestrated, invokes a window frame.

The black binoculars and the shadow cast by the cherub echo the strong horizontals of the floor. These are offset by the verticals on both edges, especially the black window frame on the right and the blue shadow encroaching from beyond the confines of the canvas.

Just as the blue of the Mondrian painting echoes the blue shadows on the cherub, here the powerful lines mimic the structural qualities of the Mondrian, enclosing the flatly painted expanse of the yellow background.

Images of Mondrian's works are important and enduring motifs of Liu Ye, who first encountered works by the Dutch painter in 1980. At the time, Liu Ye was a student of industrial design at Beijing Industrial Art School. Later, after completing his studies in Beijing's Central Academy of Fine Arts he spent prolonged periods in Europe – first studying in the Hochschule der Kunste in Berlin in 1994 and later at the Rijksakademie in Amsterdam in 1998, which gave him the opportunity to see many of the master's works first hand.

Imbued with intrinsic mystery and ambiguity, Mondrian and Angel pays homage not only to Mondrian but also to a multitude of art historical and cultural references.

Bernhard Fibicher observes: “In his work Liu Ye strives to combine the imagination and sensibility of the fairytale with the strictly rational thinking of philosophy, to obtain a synthesis of eastern art (in his paintings we can trace Chinese but also Japanese influences) and western role models (Mondrian, Barnett Newman etc.) in strict and at the same time playful visual findings”.

A sublime synthesis of East and West, tradition and contemporaneity, Mondrian and Angel manifests as a quietly theatrical conceptual prism, drawing our worldly vision into fantastical realms of fairytales and dreams. 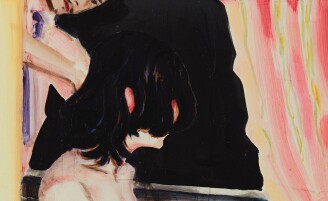