L i Yuan-Chia was one of Taiwan's earliest pioneers in abstract and conceptual art who made an extraordinary journey from an orphanage in rural China to the avant-garde world of 1960s London. He lived a life that critic Guy Brett concluded was "characterised by abrupt change". From the beginning of his artistic career, he stroke against the restrictions of traditional definition of art and forms, his conservative training and martial law in Taiwan, and later the strange climes after immigrating to Europe. Constantly relocating, he embraced waves of culture shock and transformed them into sources of inspiration and creative freedom.

Li Yuan-Chia first incorporated Eastern philosophy such as Chan Buddhist and Taoist thinking into Western modernism and abstraction, creating his unique stream of conceptualism. Later he founded LYC, a free-form community of creators in the English countryside that anticipated artistic trends of participation and collaboration decades earlier. The LYC was 'the most unexpected and unusual museum' in 'the northernmost part of England' as described by the prominent art historian and critic Paul Overy in The Times on September 4, 1974.

Born into a peasant family in rural Guangxi Province, Li Yuan-Chia was a gifted child and won a scholarship to a boarding school some distance away from home at the age of eight, little did he expect that it was the farewell with his parents and hometown. Three years later, with hopes of getting access to better education, Li was adopted by his aunt and maternal uncle who served in the Republican army. Li Yuan-Chia moved to Taiwan with the Nationalists retreat after the Chinese civil war in 1949. He later lived in Italy, then London before eventually settling in Cumbria, in the north of England, for his last 22 years.

In 1968, Li Yuan-chia's poet friend Nicholas Sawyer, then a student at the Courtauld Institute of Art in London, invited him to visit his family home at Boothby in Banks, Cumberland. He was immediately captivated by Boothby's rural beauty, and saw that it was strangely similar to his hometown Cha Dong village in Guangxi province, mainland China. Like Li's natal village at the edge of the country, Banks also "lies within an elemental otherworldly mountainous landscape, renowned for its peculiar qualities of light, for which the wider region of Cumbria has been acclaimed by artists and poets for centuries." Li eventually settled and never left again except a few visit back to Britain and Europe for exhibitions.

Fascinated by the pursuit of the beginning of all things, he developed the Cosmic Point — a visual element which represented the symbolic image of the universe (or 'allness') — from a small calligraphic mark to a small circle. He used only four colours: black for the origin and the end of all things, red for blood and life, gold for nobility, white for purity, and the 'Cosmic Point' later became the major creative concept for half of his life. 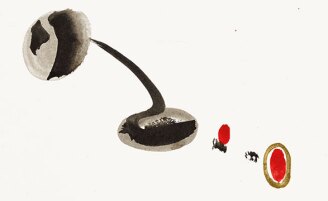