J ohn Duncan Fergusson's The Open Air Fête, Armenonville, which will be sold by Sotheby’s in the Scottish Art auction on 20th November in London, encapsulates the joie de vie of Parisian café society in the early twentieth century. It was painted in 1907, a pivotal year in the artist’s career when he relocated to France permanently. There had always been a strong link between France and Scotland and after moving to Paris, Fergusson declared: ‘Vive la France. Let’s not forget, ever, the Auld Alliance.’ (M. Morris, The Art of J.D. Fergusson, p.53). Of the Scottish Colourists, Fergusson had the most intense and enduring connection with France. He was captivated by Parisian life and the avant-garde tendencies of the French artistic movements. He had been a student of both the Académie Colarossi and Académie Julian in Paris, and Fergusson regularly returned to France, often in the company of his compatriot Samuel John Peploe: ‘[Peploe and I] were very impressed with the Impressionists… Manet and Monet were painters who fixed our direction’ (ibid, p.40). With this move to Paris in 1907 came a monumental shift in his painting style: ‘Something new had started and I was very much intrigued. But there was no language for it that made sense in Edinburgh or London - an expression like ‘the logic of line’ meant something in Paris that it couldn't mean in Edinburgh.’ (ibid, p.45).

Fergusson was enchanted by Paris, regarded at that time as the cultural epicentre of the world, and more specifically the Bohemian atmosphere of Montparnasse, where he lived and worked: ‘I was in Paris without any money or rich relations…but repeatedly encouraged by what some people call “le bon air de Paris, qui semble contenir les effleuves amoureuses et les emanation intellectuelles”. Life is how it should be and I was very happy. The Dome, so to speak, round the corner; l’Avenue quite near; the concert Ronge not far away – I was very much interested in music; the Luxembourg Gardens to sketch in; Colarossi’s class if I wanted to ask for a model. In short everything a young painter could want…’ (J. Geddes and M. Morris, Café Drawings in Edwardian Paris from the Sketch-Books of J D Fergusson, 1974, p.8).

The subject of The Open Air Fête, Armenonville is reminiscent of Auguste Renoir’s iconic Dance at the Moulin de la Galette (1876, Musée d’Orsay) but the style is more modern - more Fauve with its dark outlines and refracted colour. In Paris, Fergusson was fully integrated into the circle of artists leading the modernist revolution, including Henri Matisse, André Derain, Robert Delaunay and Pablo Picasso: ‘I had been accepted by the people I had most respect for. As an artist nothing could be more important.’ (M. Morris, The Art of J.D. Fergusson, p.54).

In the present work, Fergusson depicts the gaiety of the outdoor terrace of the restaurant, the Pavillon d’Armenonville, in the Parc de Bagatelle near the Champs Élysée. The elegant woman with her flamboyant, fashionable hat was probably based upon sketches of Anne Estelle Rice, a fellow artist and Fergusson’s lover in Paris. Fergusson and Rice met in 1907 and he painted her ‘on many occasions’ (K. Sinister, John Duncan Fergusson: Living Paint, p.37). She promenades past a crowded scene, a flânuese observing the scene of modern urban leisure and fashion. 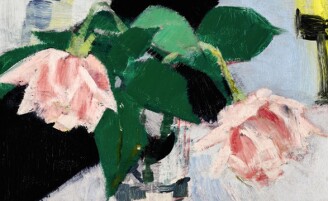