I nterior designer Jacques Grange has lived at the Palais-Royal for over 30 years in the apartment that once belonged to Colette. Over the years he has assembled a unique collection of masterpieces and rare objects transcending eras and references, which freely and cheerfully combines pieces as varied as David Hockney drawings, a floor lamp by Hector Guimard and the impressive Ostrich Bar by François-Xavier Lalanne. Ahead of the Jacques Grange | Collectionneur sale in Paris on 21 November, he talked to Guy Boyer, Editorial Director of Connaissance des Arts.

Guy Boyer: For thirty years you've been living in Colette's apartment. How did you end up living in an environment that came to resemble you so closely?

Jacques Grange: I bought the apartment from Colette’s heirs. For the first fifteen years I did all I could to preserve the spirit of the place. Then in the end I did some work, taking out the most 19th-century books and pieces from my collection, but preserving the original decor.  In the end I gave the mantelpiece from her bedroom to the Colette Museum in Saint-Sauveur-en-Puisaye and later decorated her birthplace.

I gradually added new favourites, and turned my eye towards modern and contemporary works of art: drawings by David Hockney, sculptures by François-Xavier and Claude Lalanne, for example, or this Spin Painting by Damien Hirst, artists that I've known or rubbed shoulders with. These works all immediately found their place. So Colette allowed me to move in, but she's a constant presence in the apartment: her padded méridienne sofa, her portrait by Irving Penn and her bust by Fenosa are still there.

GB: Considering the pedigrees of the objects around you (and your bias towards to mixing the antique with the contemporary) we find many elements from your personal biography.

JG: You're right: the spirit of Henri Samuel, the great decorator I trained with, who guided me at the start of my career. I was leaving the École Boulle and then the Camondo where I had been introduced to the skills of French craftsmen. According to Henri Samuel, I learned the meaning of great quality, the quality of the bronziers of the 18th century, the wealth of silks and fabrics and all the trimmings. I followed the restoration of the Trianon and the commission given to Diego Giacometti of pieces for the bedroom of Marcel Bleustein-Blanchet. We all gathered around him in a circle when he met his suppliers. At the age of 23 I went back to Didier Aaron, who was working for Alain Demachy, whose assistant I became. It was on the basis of that experience that I really went into work. I spent over 10 years there, and Didier Aaron soon switched his most important clients to me. Working for him, I learned to have confidence in myself, and to assert my personal taste... I installed my own apartment with the big bed by François-Xavier Lalanne and some Art Déco furniture.

Some encounters influenced my taste: if Henri Samuel introduced me to the high quality of the French, I went on to discover the great collections thanks to Marie-Laure de Noailles. We met in 1968 through a Belgian poet, a friend and neighbour, Théo Léger, who was close friends with Paul Éluard and Dora Maar, at the vernissage of his annual exhibition, because she drew and painted. It was in her town house on Place des États-Unis that I discovered a taste for art, merging all the eras together, imagination, high quality a mixture of styles. She supported all the great artists of the 20th century. Her life was mixed up with the artistic creation of the century and I looked on open mouthed. Her taste and her gaze would become the model of the Bergé-Saint Laurent collection: even though she had already corrupted it by adding countless works of art, the minimalist décor that Jean-Michel Frank had installed in her house on Place des États-Unis, was the 'eighth wonder of the world', to quote Yves Saint Laurent's enthusiastic expression. She was an accumulator. She could combine a simple postcard of a toreador with an oil by Cranach or her portrait by Dalí. I also shared with Pierre Bergé and Yves Saint Laurent our discovery of Art Déco and the passion for the creations of Jean-Michel Frank, following on from what we had seen at Marie-Laure's.

GB: Can you tell me about some of your clients?

JG: Over 30 years I have worked for a lot of collector clients, they have often trusted me with the decoration of all their houses, people like Yves Saint Laurent and Pierre Bergé, Paloma Picasso, Sophie and Jérôme Seydoux, Terry and Jean de Gubzburg, Leon Black, Francis Ford Coppola, Valentino, Barbara Gladstone and big European families, Caroline of Hanover, Carlo and Polissena Perrone. I’m pleased that the rising generation trusts me too: Sofia Coppola, Aerin Lauder, the Olsen sisters, Andres and Lauren Santo Domingo... Every time, as far as I'm concerned, it’s a matter of genuine encounters, and most of them have become friends.

In the provenance of the objects in my collection you actually find souvenirs of family members. Winks to Madeleine Castaing with her Sèvres biscuit vases or that pair of Second Empire oil lamps topped with gold glasses that are still there. In the drawing-room, the desk comes from the Château de Groussay, the residence of Charles de Beistegui, and the broken-backed armchair bears the monogram of Emilio Terry...They tell human stories, journeys. A little Victor Brauner that belonged to André Breton, this Magritte from Paul Éluard’s collection or these Builders by Fernand Léger, which was owned by Maurice Thorez. I'm charmed by all of that.

GB: How should we define your style? Speaking of Colette’s apartment, the writer François Baudoit said that at first there was a side to it that was rather 19th-century romantic and ‘eclectic chaos’ and that after that it had become French neo-classical. Is that how you see it too?

JG: My obsessions... It's the rigour of Jean-Michel Frank and his play with material, the interpretation of 18th-century decorations by Madeleine Castaing. From my initial classical training I have retained my sense of architecture. From Madeleine Castaing, fantasy, the love of gardens, which I like to bring inside houses, a certain Russian taste. With Marie-Laure de Noailles it was more the contribution of Surrealism. Today, my inspiration is uncluttered. But I go on mixing furniture and objects from different periods. I like to juxtapose beautiful nameless objects with no provenance, favourites with an emotional charge, with masterpieces like these bronzes by Diego and Alberto Giacometti.

GB: There are a fair number of masterpieces here.

JG: I like all the works here. They enchant my life. I'm particularly attached to the bar by François-Xavier Lalanne which I’ve associated with a tondo by Daniel Buren with green stripes in the hallway to the apartment. I like the effect of that encounter. It was like a creation! Claude and François-Xavier Lalanne had made a big set of mirrors for Yves Saint Laurent at Rue de Babylone. I discovered their work at the Galerie Alexandre Iolas and then introduced them to Charles de Noailles and his daughter Nathalie. For them they made Pompadour’s Donkey, a humpbacked desk of which I now also have a copy that recalls that encounter. Most of all I like mixing styles because I have a deep love of works for what they are and not as part of a decoration. Hector Guimard rubs shoulders with Rietveld, Alexandre Noll or Mattia Bonetti. I juxtaposed this Tom Wesselmann mouth with the Nabis paintings of Sérusier or Ranson.

JG: Yes, because I don’t just buy for names. For example there’s a little landscape by Nicolas Roerich, the Russian who worked for the Ballets Russes, and most importantly created sets and costumes for Stravinsky’s Rite of Spring. And then there’s a work by Vladimir Baranov-Rossiné, a Russian Futuro-Cubist painter unknown in France. And then there are drawings by Klee, Ernst (with that very original frame by Rose Adler) or Magritte because I wanted to have them around me.

GB: What's your motto as a collector?

JG: I have no motto as such, but I'm enthusiastic about very different pieces, and I'm deeply eclectic, guided by discovery and curiosity.

GB: What are your most recent discoveries?

JG: This head of St Lucy by Adolfo Wildt, the Italian sculptor of Expressionist marbles who taught Lucio Fontana. I discovered this artist in a retrospective in Paris, and I had already seen some works owned by the great Venetian collector Francesco Carraro... And then there are other more contemporary Italian artists like Dadamaino, Carla Accardi and Ettore Spalletti.

GB: But in that case why sell?

JG: These works have invaded by flat. I sell because I want to renew myself. I love all these works, each one chosen with love. I love the idea of putting them in the hands of other collectors who will love them as much as I do. It’s embarking on a new project, getting into action.

GB: So these spaces will soon be empty. What are you planning to replace all these masterpieces with?

JG: Contemporary Italian works that are hanging about in my office at the moment. But my eyes settle everywhere, in search of new things to grab my heart, new loves. 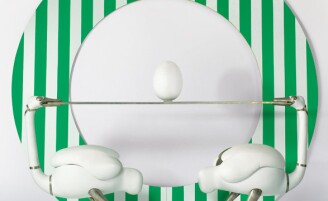