Inside the Work of Outsider Artist Amadeo Luciano Lorenzato

By Sotheby's
S|2 London's exhibition of South American artist Amadeo Luciano Lorenzato is a rare opportunity to see this significant figure in Brazilian modernism outside of South America.

B orn in Brazil at the turn of the twentieth century, Amadeo Luciano Lorenzato was a largely self-taught artist. His work remained largely unknown outside of Brazil during his lifetime, and for decades he was considered a regional artist. However, his work has recently gained recognition following two solo shows at David Zwirner in London, and Mendes Wood in New York. The recent attention on Lorenzato’s work has led to an overdue reassessment of the artist and his place within the broader context of Brazilian modernism and international art history.

Lorenzato had a profound and natural curiosity for the arts. He educated himself in the major art historical movements, favouring in particular; the Italian Renaissance painters Masaccio, Leonardo da Vinci, and Michelangelo. He developed his technical proficiency in painting through his work as a mural painter in Brazil, and later, restoring frescoes in Rome. Through this work, he also developed an interest in architecture that is palpable in his artworks, many of which feature townscape compositions.

Lorenzato’s work depicts much more than just his hometown, Belo Horizonte in Brazil, it demonstrates deep rooted Brazilian culture and how this has impacted him and his practice as an artist. The reminiscent images of familiar landscape reflect everyday life, and intimate moments that the artist has encountered and captured. His work also subtly veers into abstraction through the use of distinguished painterly patterns and textures, many of which the artist created using handmade tools. Lorenzato’s works are often small in scale yet abound with expression and are rich with a vibrant palette of self-made pigments.

In 1925, Lorenzato enrolled at the Reale Accademia delle Arti in Vicenza where he stayed for a short time developing his artistic practice. He was eager to visit other parts of Europe to improve his painting language further, which led him to venture on a year-long cycling tip across Europe in 1927 with a Dutch painter that he had met, Cornelius Keesman. This trip enabled Lorenzato to absorb European culture and architecture, as well as providing him with the opportunity to explore museums encountering works by artists such as Matisse and Picasso. After sustaining an injury to his leg in 1956, Lorenzato committed himself to painting full time, and settled back into Belo Horizonte in Brazil, where he lived and worked until his death in 1995.

In 2014, the artist’s work was the subject of two solo exhibitions, one at Galeria Estação and the other at Bergamin & Gomide, both in São Paulo, which were organised by the artists Alexandre da Cunha and Rivane Neuenschwander. Since then, his work has been exhibited in solo and group exhibitions in Brazil, including a 1995 retrospective exhibition at the Museu de Arte da Pampulha, Belo Horizonte and in 1971 the artist also represented Brazil in the 3rd Triennale of Bratislava. 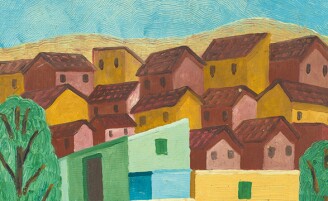