P erhaps when one thinks of high complications, the first examples that spring to mind are watches incorporating perpetual calendars and tourbillons. While these are by no means easy feats in watchmaking, they are somewhat overshadowed by what is widely considered "the most complex of horological complications" – the grande sonnerie or grand strike complication, seen in F.P. Journe's Grande et Petite Sonnerie Souveraine on offer in Sotheby's New York 6 December Important Watches auction. Combining a quarter striking mechanism with a minute repeating mechanism it allows the user to hear the time striking as it passes, as well as activate a minute repeating function on demand.

This complication took François-Paul Journe six years to master and ten patents to create. It combines every element that has come to define Journe: both the man himself, and his watches. Journe constructed his first tourbillon at the age of 25. From a small workshop, he began creating bespoke watches for private collectors by the mid-80s. Dedicated to quality and craftsmanship, Journe honed his skills and developed his brand for a further 15 years before, in 2000, he opened an atelier in the heart of Geneva’s art district, producing three to four watches per day as “F.P. Journe - Invenit et Fecit.” Now an important name at boutiques around the world, F.P. Journe has won multiple awards and achieved the highest acclaim for their dedication in maintaining the same quality and consideration that Journe himself has insisted upon his entire career.

The art of watchmaking is more than a matter of making fine watches – it means giving part of oneself… as a legacy bearing witness to one’s time.

Not only is immense skill required to produce such a piece as the Grande et Petite Sonnerie Souveraine, but the complication’s delicacy means that particular attention has to be paid to the robustness of its function, in order to avoid mechanical failure. Movements featuring this complication are often easily damaged, not by the maker, but by the wearer. This is something that Journe considered as the most difficult hurdle to overcome and, yet, he succeeded. He jests in the owner’s manual: '"..the first entry in my specification book for you was: 'to make it safe to use by an eight-year-old child.' You will forgive me if you knew that the eight-year-old-child set me the toughest assignment of my career." Taking into account the complexity of this undertaking it is no surprise that the manufacturer only produces four pieces a year.

It is then perhaps a juxtaposition of terms to say that, in essence, this is an incredibly simple watch both to look at and to use. The dial encompasses Journe's signature, minimalist aesthetic with a beautiful engine and turned, eccentric dial screwed to an 18k white gold plate, incorporating only two other indications – one showing the power reserve, the other showing the sonnerie function. Indeed, one might almost miss the fact that, beneath the dial, lays the mind-boggling in-house calibre 1505 with all its complexities. Only through the small aperture revealing the striking hammers is the wearer afforded a glimpse of the 18k pink gold work beneath.

This elegant simplicity carries through to the case: plain and circular with two pushers to the band operating the sonnerie selection and minute repeating. Another brand might have flaunted, through the dial and case, the complex nature of this watch. But as a testament to Journe's refinement and humility, he opted for intuitive clarity over messy superfluousness. His humble and considered ethic is epitomised by the fact that the case of this, the most expensive watch in the Manufacturer’s repertoire, is not made out of gold or platinum, but steel. (For Journe, the obvious choice; it is the material which allows the watch to produce the most perfect chime).

The movement is on full view through the sapphire crystal display back, where one can observe the intricacies of the machine within (the praying mantis style repeating arms are especially fun to watch). But again, this spends most of its time sitting modestly out of sight against the wrist. It is this modesty and thoughtfulness that is so quintessentially Journe, a quality for which he is quite rightly renowned. 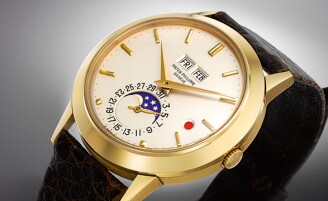