In a new era of possibility

and challenge artists and curators to reimagine what an exhibition can be.

I n 2008, CCA Wattis in San Francisco opened its exhibition, The Wizard of Oz. The show included memorabilia related to Frank L Baum’s 1900 book and the 1939 movie adaptation, and summoned Dorothy’s fantastic journey through the canny placement of works that carried associations – whether intended by the artist or identified by the curator – with elements of the story. Jennifer Bornstein’s shimmering green film Voyage to Samoa, 2003 served as a glimpse of the Emerald City, and Simryn Gill’s black-and-white photographs of dry vegetation and dirt roads in rural America may as well have been pictures of Kansas. Bruce Conner’s gritty, wistful film Valse Triste, 1977 at the exhibition’s end brought viewers partway back to Earth, but didn’t fully prepare us for the surprise of an emergency exit marshalled for the purpose of immersive experience – stumbling out of a black box into a bright and dusty parking lot.

The Wizard of Oz was not my first encounter with aesthetic immersion. I’d wandered through the dark-room warren of Mike Nelson’s Mirror Infill at the Frieze Art Fair in London in 2006, and I had visited Artempo at Venice’s Palazzo Fortuny in 2007, where dramatic interior design amplified art’s power to stretch and deepen one’s sense of time. But The Wizard of Oz sticks out in my memory as an especially visceral experiment in exhibition design, reminiscent of Brechtian theatre.

Tokyo-based collective teamLab now operates three venues, two in its home city and one in Shanghai, attracting millions of visitors to play with digital fish and butterflies powered by complex responsive technology. Meow Wolf, founded as a DIY collective in Santa Fe in 2008, now runs a slick (but still outlandishly weird) permanent installation in its home city; it has also opened an outlet in Las Vegas and is launching another in Denver this year. Superblue, an initiative that presents immersive entertainment with blue-chip polish, is launching its first space in Miami this spring, featuring installations by teamLab, James Turrell and Es Devlin.

What’s driving the trend toward immersion? “We’re seeing an emerging economy of younger collectors valuing experience over ownership,” says Anne Bracegirdle, an expert on art and technology. She explains the meteoric popularity of works like Yayoi Kusama’s Infinity Mirror Rooms, soon to return to Tate Modern, through the proliferation of images of them on Instagram. “These works are about what the person in them experiences,” Bracegirdle says, “and that’s connected to social media and the desire to share an experience with your personal networks.”

“When people are having fun, they’re more open to new ideas”

Some say the white cube is an immersive experience, too, and I’m sure many people are drawn to its cool, quiet space as a refuge from the noise of everyday life. But it’s harder to share the experience of contemplating a painting on Instagram, not least because paintings shot with a smartphone always come out crooked. The white cube never lets you forget you’re there to look at art. An immersive art experience absorbs the viewer with enthralling, multisensory stimuli, inviting movement, interaction, surprise. It’s not just another kind of public space with its own set of protocols. It’s a different world.

Alice: Curiouser and Curiouser, which will be open this summer at the V&A Museum in London, combines conventional museum display with techniques of immersive exhibition design to tell a story that is, like Oz, one of escape. It explores how Lewis Carroll’s tales, across media adaptations spanning a century and a half, have served as “a Bible for the imagination,” as Kate Bailey, the show’s curator, puts it. The centrepiece is a VR experience, developed in collaboration with HTC Vive with visuals by illustrator Kristjana S Williams, presented in a room where roses change colour from white to red. Exhibition design can make references to shrinking and other transformations that take place on the other side of the looking glass. But, Bailey says, “VR lets us push those imaginative ideas to another level.” 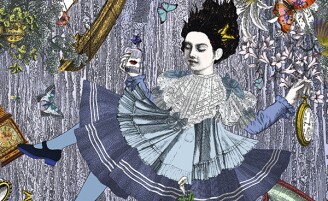 She notes that the V&A first opened its doors around the same time that Alice’s Adventures in Wonderland was originally published, and suggests that the museum shares the book’s Victorian fantastic sensibility. It has frescoes and ceramic elements in the stairwells that generate correspondences with the works of art and design on display. Other museums that opened in the 19th century tend to integrate art and architecture in a holistic experience, unlike 20th-century temples to purity. Think of the great palace museums, like the Louvre and the Hermitage. Alice’s story is perennially popular, but the physical environs of Curiouser and Curiouser harken back to a time whose tastes and aesthetic entertainments rhyme with today’s.

While immersive art can allude to the long tradition of immersive media, many projects are primarily oriented toward the present or the future. Ralph Nauta, who with Lonneke Gordijn runs DRIFT, says that their fusions of nature and technology demonstrate “how two seemingly different worlds need each other to coexist in the future and how one can protect the other, how it can become a stronger entity than two separate worlds.” They develop custom hardware with the end goal of enhancing the audience’s appreciation of environmental phenomena. A choreography of moving mechanical parts, Nauta says, conveys the feeling of watching a swelling sea, or clouds drifting past mountain peaks, or the wind rustling a field of long grass. In DRIFT's conception, a moment of wonder at technical wizardry doesn’t transport audiences to a fantasy world, but opens them to heightened sensitivity of the world outside.

Risa Puno is another artist who uses moments of engagement to pivot to understanding. She works primarily with games. “Often people encounter interactive art and they’re not sure if they’re allowed to touch, but with games, people let down their inhibitions,” she says. “They can just go for it and engage. When people are having fun, they’re more open to new ideas.” In 2019, Creative Time presented her work The Privilege of Escape in New York. It took the form of an escape room – an attraction that locks players in an enclosed space full of puzzles to solve. Puno framed hers as a science experiment, and attendees were divided into two groups, sent to different rooms and given 45 minutes to complete their challenges.

My group’s room was lit with red light, which made it near impossible to match colours – a key element of many puzzles. We struggled, often laughing at how ridiculously difficult it was, and couldn’t complete the challenges in the allotted time. When we emerged into a bright white room for a presentation of “scientific findings,” the other group was already sitting there, a little restless since they’d been done for almost 15 minutes. They watched us with contempt, as if wondering how stupid we must be to struggle with those simple games. But then they learned that while they worked under full-spectrum light, we’d been limited to red. Now they looked shocked, guilty about how they judged us. Puno’s work was an allegory of privilege: the luck that makes life easier for people who happen to be white, male, straight, rich.

DRIFT aims to sensitise people to the natural world. Puno opens her audience to social realities. It may not sound like fun on paper. I got the sense that most attendees were escape-room fans who came simply because The Privilege of Escape was free (like most immersive experiences, these rooms usually cost more than a movie or a museum visit). But it was fun, and eye-opening. Bracegirdle thinks there’s space for more socially engaged immersive art like Puno’s, especially now. “People have become so raw and vulnerable during the pandemic,” she says.

“They’re desperate for connection. Plus, there has been a corrosion of truth, reality and meaning. Socially engaged experiences are using the medium to provide a new sense of truth.” And after all, escape and fantasy are at their most powerful when they collide unexpectedly with reality.

Alice: Curiouser and Curiouser is proudly sponsored by Sotheby's.