Icon of Polynesian Art: the Rapa Dance Paddle of the Schindler Collection

I n 1966, the exhibition Masks and sculptures from the Collection of Gustave and Franyo Schindler opened at Nelson Rockefeller's Museum of Primitive Art in New York, paying tribute to the unique eye of these American collectors. Originally drawn to Greek and Roman antiquities, Gustave Schindler and his wife Franyo, an artist, discovered the arts of Africa and Oceania during a trip to their native Germany in the late 1940s.

They were instantly mesmerized by the aesthetic force of these pieces and so began a collection that would come to include many masterpieces of ancient sculpture of African and Oceanic art, one of which was the Sikasingo statue exhibited at the MoMA in 1984 during Primitivism in 20th Century Art: Affinity of the Tribal and the Modern and this majestic Rapa ceremonial dance paddle from Easter Island acquired from the New York dealer J. J. Klejman, which was most likely the first to ever be featured in a public exhibition in the United States.

In the introduction to the exhibition catalogue signed by Gustave Schindler he writes about the pieces in his collection: “Their simple and direct expression gives them a life of their own that makes the viewer aware of the purpose for which they were created.” Although this line of thought applies to all the pieces in their collection, it seems to be particularly apposite in relation to the refined aesthetics of their rapa.

Indeed, the rapa corpus is one of the most refined not only within Easter Island art but also within Polynesian art in its entirety. Discovered in 1722 by Dutch sailor Jakob Roggeveen, Easter Island has since been a source of endless fascination for Westerners. Although the Moai stone colossi - imposing effigies of deified aristocrats - instantly struck minds, it was in 1774, during the voyage of Captain James Cook, that wooden sculptures were collected there for the first time. Exemplars of this refined art form thus arrived in Europe in the eighteenth century, revealing to the West the creative genius of the Rapanui (Easter Islanders), both in their many reinventions of the human figure and in their formal modernity.

Until their conversion to Catholicism in 1868 Easter Islanders punctuated the year with several public celebrations held at the foot of sacred platforms. Some of the participants carried a wide variety of wooden ornaments: rank insignia and figurines. The largest and most stereotyped of them, the ua and the ao - both with their upper part carved as a bifrons human head - were held by hand, with their base resting on the ground, as illustrated in a drawing by Pierre Loti (Rochefort, Musée Hèbre, ref 2012.2.68 and 2012.2.50). They found their counterpart in the famous rapa, double-bladed dance accessories that bring the abstraction of the human figure to its apex, and which, whilst less imposing in size, are nonetheless carved with an extremely advanced technique.

It was not until 1868 and a stopover where John Linton Palmer, a surgeon aboard the HMS Topaze, disembarked, that the name of these unique creations came to be known: the rapa. Palmer did not collect precise testimony about these works of art, but he saw them in the hands of the Pascuans as soon as he landed; they were ubiquitous - carved or painted on rocks, tattooed on women's backs - therefore he pointed out their importance. On 4 January 1872, Pierre Loti was the first to attend a "paddle dance", which he mentions but does not describe (“Rapa Nui, l'île de Pâques de Pierre Loti”, Les Cahiers de la Girafe, 2009, p. 96).

In 1886, William Thomson, the treasurer of the American ship Mohican, observed the rapa during dances organized specifically for his benefit. He was then told that they "are usually held one in each hand, but from time to time [during the dance], one and sometimes both are abandoned." He acquired two of them, both still preserved at the Field Museum of Natural History in Chicago. (Thomson, "Te Pito te Henua, or Easter Island", Annual Report of the Board of Regents of the Smithsonian Institution, 1891, p. 491).

Along with reimiro pectorals, the rapa are the best examples of the search for aesthetic perfection manifest in the sculptures of the great Easter Island masters. In 1774, during James Cook's stopover, naturalists John and Reinhold Forster marvelled at "this taste for the arts" developed by Easter Islanders in their wooden sculptures (Forster, Florulae insularum Australia prodromus, 1786, vol. 1, p.591). Aesthetic pleasure was the only luxury that Easter Islanders allowed themselves aside from the glorious folly of their monuments and stone statues.

An epitome of harmony and of the abstraction of the human figure, these rapa is a prime exemplar of an eloquent degree of accomplishment. The pared down purity of the lines is echoed in the delicate curve of their contours, and the beauty of their surface devoid of any decoration save the presence of stylised faces. The form is rendered solely as a combination of a sculpted champlevé line, where the curve of the eyebrows extends into the rectilinear ridge of the nose, with a representation of spherical ear ornaments: they are the very essence of modernity. The lower blade, with its sensual curves, evokes the lower body. It is traversed axially by a discreet crest that extends beyond the base into a phallic appendage.

The pared-down beauty of these pieces is enhanced by the quality of the wood and its patina. Like the "female" moai papa statuettes when viewed in profile the elegant rapa are so thin as to almost disappears; Producing thin straight planks out of this very hard wood, with its cross grain and knots, required masterful craftsmanship. Beneath the varnish, conventionally applied by English collectors in the nineteenth century, long shallow grooves can be identified, running parallel to the edge of the lower blade and resulting from the traditional final polishing. On the handle, vigorous ceremonial manipulations have removed this coating, revealing the nuances of the reddish wood. Some traces of erosion and occasional compressions – also blunted by use – punctuate the edge of the blades. This wear is evident on most classical rapa – as on the one at hand – and attests to the active ceremonial life of these objects.

In addition, the dimensions and shape of the superb rapa presented here make it one of the most classic and significant among known exemplars including those in the collection of the British Museum, former Oldman collection, congregation of the Sacred Hearts of Jesus and Mary in Rome. The differences that occur amongst the limited number of such venerable rapa pertain to the shape of their blades, determined by the position of the axis of their widest part. Within this narrow corpus – and as illustrated in this piece – the width above the eyebrows of the upper blade is typically larger than the one along the axis of the ear ornaments. Moreover, these ancient rapa have an upper blade that is narrower than the lower blade, unlike the more recent ones, which, much as those collected by Thompson in 1886, featured parallel lateral edges, and a significant increase in handle height. 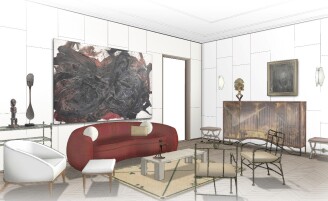 Upon his return to Europe, Pierre Loti wrote in his travel diary about Easter Island: "I remember it as almost a fantasy country, a dream land." (Pierre Loti, L'île de Pâques. Journal d'un aspirant de La Flore, 1872). The fascination exerted by this small island on the young European still finds an echo today in the mysterious beauty of this iconic piece. Chosen in 2009 to represent the beauty of Oceanic creations alongside master paintings of the century during the famous Beyeler Foundation exhibition La Magie des Images. L’Afrique, L’Océanie et l’Art Moderne this piece stands out as a masterpiece in the history of universal art. The rarity of its corpus, the beauty of its forms and the sheer force of its refined aesthetics are compounded by an exhibition history within the western world that has been recorded since the second half of the 20th century. 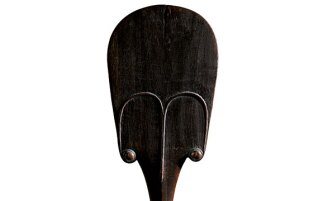