How the Andrew and Juli Wieg Collection came to be

Born in Budapest in the early 1930s, Andrew Wieg (1931-2010) came to the Netherlands in 1956 with his fiancée Juli Fodor (1936-2015), descended from a prominent Hungarian family, as part of the largest wave of refugees to flee a European country post-World War II, following the Hungarian Revolution. [1]

They married in Overveen and subsequently founded a new life in Delft, with Andrew starting his career as a biotechnologist for Gist-Brocades, and Juli working as a photographer and novelist. They soon immersed themselves in the art world, however, and started collecting almost immediately.

Initially the Wiegs focused on Old Master Drawings, drawn especially to works which reflected ‘the hand of the artist’, and paying close attention to condition and quality. They subsequently ventured into the field of Old Master Paintings. Landscapes were a particularly favored subject for them, but they also loved works of art with a sense of history and erudition.

They bought a painting by Jacobus Sibrandi Mancadan in the F.C. Butôt sale at Sotheby’s, Amsterdam in 1993, which was amongst their most cherished works, along with the pair of Guilliam van Nieulandt pictures they acquired in the 1980s. Their passion was for 17th-century paintings and drawings, but if a work from the 18th century appealed to them, like the exceptional set of the 12 months by Pieter Jan van Liender, they gladly bought it.

In 1993 Andrew Wieg retired, after working as chief biochemist at Quest International in Naarden (a major producer of flavors, fragrances and food for the international market), and decided to turn his lifelong passion for collecting Old Master paintings and drawings into a business.

Together with Juli, they gained a reputation for supplying the finest paintings and drawings to a discerning international clientele, including many of the most important collectors in Europe and America. Andrew Wieg was a scholar-dealer who only handled Old Master Paintings and Drawings that he liked, that were interesting, or both, with a particular eye for the unusual, especially works that cast their authors in a fresh light.

Over nearly four decades, the Wiegs accumulated a multitude of wonderful objects. Many of these treasures have, until now, been stored unseen in their residences in the south neighborhood of Amsterdam where they resided since the late 1960s. They were very well-advised, not only by the auction houses they frequented, but also by the RKD in The Hague, experts such as Dr. Fred G. Meijer, Charles Dumas, Marijke de Kinkelder, and dealers, including Peter and Hilde de Boer, Johnny van Haeften, Rafael Valls, David Koetser, Jonathan Green and Ronny Vanderkar.

Their children also inherited a love and talent for the Arts: their son, Rogi Wieg (1962-2015), who inherited the talent of writing from his mother, was an internationally acclaimed poet, novelist and musician, who published many beautiful poems and was a part of the art scene in Amsterdam and beyond.

Their daughter Kati Wieg (born 1966), an independent art historian and art advisor in her own right, also became an art dealer after working for various international auction houses, including Sotheby’s, and worked alongside her parents in their art dealing partnership from 1993 onwards, to great acclaim.

The Wieg collection is testimony to the shared collecting passion of two generations from a single family, and this sale presents a unique opportunity to acquire a piece of this history in the form of high-quality examples of Dutch and Flemish Old Master Drawings and Paintings.

In addition to the current sale of paintings and drawings, a small selection of exceptional sheets from the Wieg Collection featured in the recent New York sale of Old Master Drawings (27 January 2021). Those drawings included an outstanding design for a decorative project by Paul Bril (acquired by the British Museum), a fine, early print design by Gerard van Groeningen (acquired by the Teylers Museum, Haarlem), an important, rare panoramic view of the Lower Rhine valley near Kleve by Adam Pynacker, and excellent 18th-century drawings by Pieter Jan van Liender and Egbert van Drielst.

The rest of the collection will be offered in a dedicated online auction in London in the early Spring, to include paintings by pre-Rembrandtists such as Claes Moeyaert, interesting landscapes by the idiosyncratic Frisian painter Jacobus Sibrandi Mancadan, portraits by Jan van Haensbergen and Jacob Duck, sumptuous still lifes by Barent van der Meer and Harmen Steenwyck, and fascinating landscapes of both Dutch and Flemish origin, by the likes of Lucas van Uden and Louwijs Elsevier. 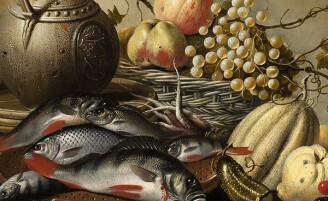 [1] Titled Az út szélén meaning ‘Roadside’, this book from 2004, co-written by Julia Fodor-Wieg tells the story of what she and her family witnessed and were victims of, as a result of the actions of the Hungarian state in Hungarian domestic politics and public life, whereby 600,000 Jews of Hungarian citizenship were massacred. The stories also give us an idea of the atmosphere of Hungary between the two World Wars. See also: https://moly.hu/konyvek/kadar-pal-terner-kornelia-fodor-wieg-julia-az-ut-szelen