"I am a potter, but he was an artist" said Lucie Rie on Hans Coper, remembering one of the most extraordinary artistic partnerships of the post-war period, interrupted in 1981 by Coper's death.

Lucie Rie and Hans Coper are considered the UK's leading potters of the second half of the twentieth century. Lucie Rie emigrated in 1938 as an accomplished ceramist from Vienna to London, and Hans Coper fled from his native Germany in 1939, at the age of nineteen. Coper’s career as a potter began in 1946 as an assistant at Lucie Rie's studio in London, marking the start of a close friendship and artistic collaboration which was to continue for the next 35 years.

Hans Coper's works were more experimental and less colourful than Rie's; consisting mainly in tones of white, brown, yellow, brown and black. Compared with the sophisticated and delicate dishes of Rie, his vases were rather abstract and often monumental in form. Coper was constantly in search for new forms and his biggest inspiration throughout his career was sculpture, inspired by the works of Constantin Brancusi and Alberto Giacometti. Coper, like Brancusi and Giacometti, invested a great deal of attention to the proper relationship between the object and its pedestal.

These two large scale vases, Spade Form, and Disc Form executed circa 1977 and 1965 respectively, come from Coper's later period when the larger pieces took on a more figurative quality a perfect example of Coper's mixing pottery with sculpture. The spade form was introduced to his works in 1967 at the exhibition Boijmans Van Beuningen Museum in Rotterdam.

Today, Coper's are held in private collections and major museums collections worldwide, including the Victoria and Albert Museum in London, The Metropolitan Museum of Art, New York, and the Boijmans Van Beuningen Museum in Rotterdam. The inclusion of these works in the Design sale, is a unique chance to see these striking works by an icon of European ceramics. 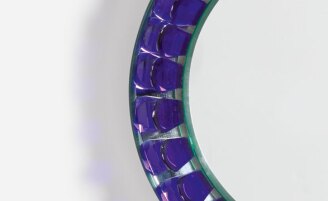