T he Dutch Golden Age came about thanks largely to an explosion of wealth from trade that began at the end of the 16th century and lasted well into the 17th, as the Dutch provinces seceded from the Spanish Empire and established their full independence. It created a large, wealthy middle class such that buying art was no longer the preserve of just kings, queens and religious orders: everybody with money to spare was at it.

To put the new wealth into perspective, by the 1630s the Dutch East India Company, based in Amsterdam and the world’s first truly ‘public’ company, was, in today’s terms, worth $7.9 trillion dollars, more than the combined value of the top twenty companies in the world today. While Amsterdam was to replace Antwerp as the world’s foremost trading port, both the northern and southern Netherlands thrived economically during this time, despite almost constant upheaval caused by the Eighty Years War (1568-1648).

It was against this backdrop that the paintings in Sotheby's Rembrandt to Richter sale by Bosschaert, Rubens, Rembrandt, Hals, Van Goyen and Mignon, in that order, were created. Bosschaert was the first artist to devote his career exclusively to painting still lifes in oils. It is no accident that his twenty-year career coincided with the rise of the Dutch East India Company and its trade with the Orient, because all of a sudden, wonderful new and exotic specimens were available for examination, and a market emerged for their accurate renderings.

The genre developed quickly; in fact it exploded and culminated after mid-century in the art of Jan Davidsz, De Heem and his pupil Abraham Mignon whose rich, luscious and juicy fruit, piled high on a forest floor, bookends this timeline in the 1660s.

The rise of the middle class caused a huge demand for portraiture. Enter Rembrandt van Rijn and Frans Hals. It was then, as it has been ever since, a mark of one’s success to have one’s portrait painted, ideally by as famous a painter as possible. Where Van Dyck and Rubens dominated the southern Netherlands in this regard, so Rembrandt and Hals dominated in the north – the former in Amsterdam after he moved there in 1632 and the latter in Haarlem where he spent the vast majority of his life.

It is remarkable to be able to present, in the same auction, portraits by each of the three greatest portraitists of the age: Rubens, Rembrandt and Hals, all painted within around ten years of each other, respectively in Antwerp, Amsterdam and Haarlem. Although we do not know who either of them are, the sitters in Rubens’ and Hals’ portraits are members of the wealthy middle class, memorializing themselves in paint by two of the foremost artists of the day.

Rembrandt’s self-portrait, one of only three in private hands and quite possibly the only one of them ever likely to come to the market, was painted upon the cusp of his arrival in Amsterdam and is only one of two of his forty-one self-portraits to present himself in formal dress. It was probably conceived in order to announce himself on the scene as a well-to-do and respectable artist of means, a sort of business card to say ‘Look at me, confident, well-dressed and successful, and I can paint you like this too’. 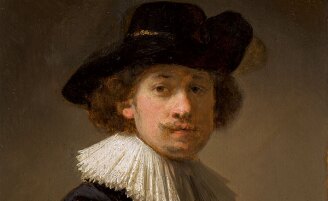