Get the Look – Hunting for Glass Objects in Old Master Paintings

The 16th century metallurgist Vannoccio Biringuccio said: “Considering the short life [of glass] due to its fragility, one cannot and must not give it too much love, and one must use it and understand it as an example of life of man and of the things of this world, which, though beautiful, are transitory and frail.” Catherine Hess, Timothy Husband, European Glass in The J. Paul Getty Museum, Los Angeles, 1997, p. 1.

Half-a-millennia later the 21st century viewer has a different perspective of this fragile material which has miraculously managed to survive over the centuries. Observing the still lifes of Dutch masters can prove invaluable in understanding how these objects were perceived and used in the 17th century.

By the mid-17th century the Röemer was the preferred vessel to use to drink wine and was a common feature in the masterworks of still life painters such as Willem Claesz. Heda and Floris van Dijck, yet relatively few roemers have survived today. The vessels were studded with berry prints which eluded to the glass’s content and also helped to ensure a firm grip. The use of Roemers was usually restricted to the wealthier merchant and upper classes. Large examples, such as lots 203 and 204 would have been reserved for special occasions where they would be passed round the company from hand to hand. A custom which continued through the 17th century was to drink to someone’s health using the same glass or when welcoming or bidding farewell to visiting guests. Roemers were exceptionally popular with the wealthy classes of the Netherlands. The Dutch glass works of the time could only supply a fraction of the demand for such vessels and as a result many were imported from the German glass-making centres.

Perhaps more than any other glass drinking vessel produced in the Venetian tradition, the elaborate ‘serpent stem’ goblets allowed glass producers to both fully entice and baffle the beholder. The coiling stem usually incorporated blue, opaque-white or red canes to create a snake- like appearance, after which the goblet is named. Complex glass stems such as this were first produced in the glassworks of Venice, there known as vetri a serpenti , and were later adopted in Northern Europe, particularly the Low Countries and Germany. The substantially effective term ‘façon de Venise’ was adopted as a selling line by the major glasshouses of Europe. 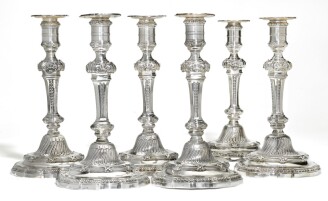