From Streets to Walls

S treet art has come a long way from its gritty beginnings in the 1970s and 1980s. The creative practice has its roots in graffiti and guerrilla tagging, illicitly covering public spaces with wheat-paste posters, stencil art and text-based iconoclasm. Street art is in its nature a form of open rebellion, reflecting our own natural instinct to challenge authority. Artists including Jean-Michel Basquiat, Keith Haring, and Blek le Rat revolutionized tagging and graffiti as an art form, and their visionary works broke boundaries of the art world. Successors to the earlier legends continue today to challenge those very boundaries, leading the way for continuous reinvention. That strain of rebellion has come of age and now extends through the works of today’s artists.

Street art has redefined the public’s perception art, and because of its success in doing so, it has changed its own nature. By taking art to the streets, artists have liberated art from the confinement of gallery walls and subsequently transformed the public’s understanding of where and how to view art. With the gradual acceptance and validation of the art form, what has once sprouted from the streets has now made its way back into the gallery space, testifying to the increasingly permeable boundary between the two spaces, as well as the public’s accessibility to art.

As so many of us continue to practice social distancing and remote working, we’ve become much more sensitive to the boundaries of public versus private space. Transcending limits of place, street art in its evolution still retains its spirit of rebellion, provocation and social commentary. It connects us to a larger world when many of us have been walled off from the outside. We’ve selected highlights from the Contemporary Online Sale to bring the art from the streets to your walls, including works by Banksy, Invader, Pure Evil, Vhils and Jerkface. 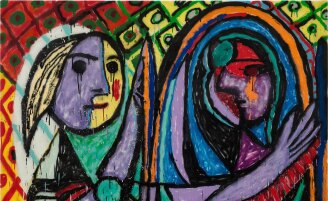