Female and African American Artists Continue to Ascend at Auction, a Study Finds

By Michael L. Klein
A new analysis reveals that art prices swelled in November 2019’s marquee auctions, chiefly in regard to female and African American artists. 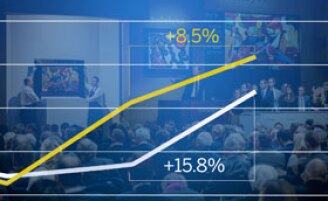 Contemporary artworks achieved a healthy median Compound Annual Return (CAR) of 6.9 percent over a median holding period (the time between auction sales) of 13 years – which is based on 130 works that resold, utilizing Sotheby’s Mei Moses.* This is consistent with past auctions since 2017, with SMM CARs of 6–8 percent.

For 230 Impressionist and Modern artworks that resold this past week, the median CAR was 2.5 percent, consistent with the prior five seasons in the 2–4 percent range.

In November, Impressionist and Modern art pieces were held a median of 23 years between auctions – ten years longer than the holding period for Contemporary works, which held a median of 13 years. Collectors are keeping Impressionist and Modern artworks for an increasingly longer time, as the median steadily increased from 14 years, as shown in the chart below. Contemporary art continues to return to market at a median of 11–15 years, as seen over the past four auction seasons.


Female artists continue to realize accelerating price growth, exceeding that of male artists, according to a study by Sotheby’s Mei Moses published in August 2019. Between 2012 and 2018, prices for works by female artists rose by an average 72.9 percent, while art by male artists appreciated by only 8.3 percent.

In November 2019, female artists’ art earned several of the highest price appreciations – underscoring the radical shifts in market perception, particularly for some of the most widely-celebrated female artists.


Sotheby’s Mei Moses can predict selling prices based on historic trends. When actual hammer prices vary significantly, it is a sign of a shift in long term demand.

Sotheby’s Mei Moses was on target in predicting that Vincent van Gogh’s Paysan brûlant de mauvaises herbes would sell well above its $600,000–800,000 estimate. This rare work from Van Gogh’s time in Drenthe is only the sixth Van Gogh painting from 1883 or earlier to come to market in the past decade, according to Artnet. These sales’ range reflect the historically lower demand for Van Gogh’s early works. SMM’s estimate was $3.95 million given its prior price of $440,000 in 1989 at Christies New York, and the piece sold for $3.14 million to two Dutch museums, the Van Gogh Museum in Amsterdam and the Drents Museum in Assen. Given this outcome, it’s fair to assess that market demand for Van Gogh’s earlier works may be picking up commensurate with his later works.

Pablo Picasso, one of the most prolific and well-represented artists at auctions, delivered some surprises at the November auctions. One work, entitled Portrait de Lola, soeur de l’artiste was estimated by SMM at $4.73 million in 2019, having been previously purchased in Paris in 1988 for about $1.39 million. It sold right on the SMM estimate, for $4.7 million. Nus, on the other hand, had a sale range of $12–18 million, and a SMM estimate at the high end, $17.9 million, having been purchased for $6.05 million in 1997. It sold for $9.95 million, showing that forecasts don’t always predict actual results.

*Sotheby’s Mei Moses continues to use the methodology designed by professors Michael Moses and J.P. Mei in 2001 of auction sales at Sotheby’s & Christie’s with prior auction prices at any auction house publicly available and excludes bought-in lots.