NEW YORK – Jeroen Verhoeven is a Dutch designer known for translating his passions for storytelling and craftsmanship into beautiful, functional objects. After graduating from Design Academy Eindhoven in 2004, Verhoeven established Demakersvan with his twin brother, Joep, and classmate Judith de Graauw. Together they create pieces that draw inspiration from classic and everyday forms while utilising contemporary materials and methods. Their innovative designs have been produced by Nike and Swarovski and are featured in the collections of London’s Victoria and Albert Museum, the Centre Pompidou in Paris, and the Museum of Modern Art in New York, among others.

A perfect example of Verhoeven’s functional, thought-provoking works is a desk of his own design, Lectori Salutem. With its title translating to “greetings, reader,” the piece is, fittingly, on the cover of our June 6 Important Design catalogue. Ahead of the sale, we spoke with Verhoeven about what makes this piece so special.

Why did you choose polished stainless steel for this project?
Stainless steel was the perfect material; there is a contrast between its apparent inflexibility as a raw material and the fluid shapes of Lectori Salutem. Shaping metal into such fluid forms is not easy given its natural state. The questioning that arises as part of the initial process, our dialogue as to how to proceed – using this material meant that this was something we could show the viewer, they can see our story in the work.

What role does the material play in the overall narrative of the object?
It is almost like freezing a moment where everything was perfect and polished. For me it symbolises a moment in life where the perfect balance between myself, Joep and Judith existed.

The title is an interesting nod to the piece’s function as a desk, but one could also imagine the title coming directly from the figures it portrays – literally greeting its readers.  How did you decide on this title and what kind of ideas or connections do you hope it sparks in viewers?
The title is a nod to the writers desks designed by Francois Linke. We wanted to reference and respect traditional craftsmanship but using new 21st-century tools. We hope that viewers see it as a continuation of a historical legacy, albeit updated with our ideas and technology.

Your brother, Joep, and long-time colleague, Judith de Graauw, are clearly represented in this design through their physical likeness.  Where do you see yourself in this piece?
Judith was our love, mine for ten years, ours for three; both she and Joep shaped me into who I am now. They are two people I always tried to bring together, and having the two most important people in my life next to me was key. Where I see myself in the work is as the third leg of the desk, trying to keep the balance between the three of us. 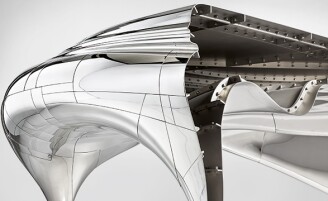