L a calèche volante is a stunning example of Chagall’s unique way of blending the fantastical with the everyday. The image of a horse leaping into the unknown has been compared to that of a sun god rising in his chariot, a subject that ‘was brought to the fore by the publication of a new Russian language journal in Paris in November 1913, named Gelios, the Russian orthography for ‘Helios’ (the Greek sun god).

When Chagall was asked about this in 1974, he “responded positively”. It may be added that the theme was a favourite among ikon painters’ (ibid., p. 181). Whatever source he may have used as a starting point when creating this image, Chagall lent to it a unique and highly personal significance, effortlessly combining an everyday episode from life in rural Russia with elements of a phantasmagorical vision.

Both the present work and the version now in The Solomon R. Guggenheim Museum have been known and exhibited under alternative titles La calèche volante and La maison brûle. In his 1961 monograph on Chagall, biographer Franz Meyer illustrated the Guggenheim painting with the latter title, describing ‘the cool and flaming zones [as] emblems of night and day’. He wrote: “The astral powers, sun and moon, appear in opposition, as in Romanesque representations of the Crucifixion. Between them stands the house of man, forever burning yet never consumed” (F. Meyer, Marc Chagall, Life and Work).

When Angelica Rudenstine was preparing her exhaustive catalogue of oil paintings at the Guggenheim Museum, she invited her colleague Margit Rowell to visit Chagall to discuss his paintings. He “identified the scene as a peaceful one, in which the predominant emotion is ecstasy, not panic or fear: C’est calme, mon tableau, rien ne brûle”’ (S. Compton in ibid., p. 180). 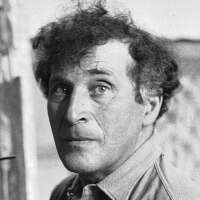 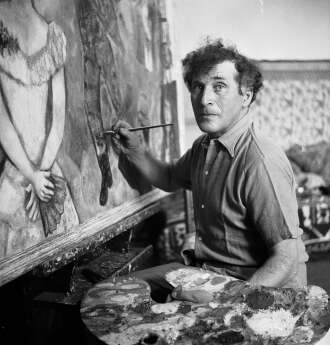 works Chagall painted between 1911 and 1914, which were included in his first one-man exhibition, organised by Herwarth Walden at his celebrated Berlin gallery Der Sturm.

The exhibition, which played an important role in establishing his reputation in Europe, opened in June 1914, and two weeks later Chagall left Berlin for Vitebsk. Although he planned to return to Paris after a short stay in Russia, the outbreak of war prevented him from returning to France and Chagall stayed in Russia until 1922. That same year the artist travelled to Berlin in order to look for the canvases he had left at Herwarth Walden’s gallery shortly before the war. While Walden had championed Chagall’s work in Germany, where he was arguably more famous than in France, he was shocked to find out that by 1922 Walden had sold all of his works, including La calèche volante.

Dismayed by this loss, over the next few years Chagall painted new versions of the paintings with Russian motifs that he had lost in Berlin. including the present work. Discussing this group of works, Jackie Wullschlager wrote: ‘It was as if he were reclaiming his property from Walden, as well as drawing up an inventory of what defined his artistic identity.’ Most of the composition were recreated from memory and ‘they turned out or like variants: the compositional rhythm is freer and less intense, the form more open, the colour more nuanced and fluid.”