Between Friends: Gifts to Oskar Trautmann from Xu Beihong and Qi Baishi

In the 1930s, Dr. Oskar Trautmann was the German ambassador stationed in China and during his tenure, he became enamoured of of contemporary Chinese paintings. With a keen eye, he meticulously amassed an art collection, and befriended pioneering artists of the age. Among them were Xu Beihong and Qi Baishi, two artists who had a famous friendship and who would both leave a lasting impact on classical Chinese ink art in the 20th century. Looking at the works by these two pioneers in Trautmann’s collection offers a rare glimpse into the period.

In 1933, Xu Beihong boarded a ship to France bringing with him more than 300 ancient and modern paintings as well as calligraphic works. Having studied in Paris decades earlier at the famous École nationale supérieure des Beaux-Arts, Xu was one of the first Chinese artists to explore the techniques of oil paintings and was especially influenced by the Realist movement – i.e., modelling art after nature. While Xu was a force of change in traditional ink painting, he was also interested in promoting Chinese arts in Europe. Thus, he embarked on his 1933 journey in order to hold the 'Exposition de la Peinture Chinoise' at the Musée du Jeu de Paume in Paris, which marked the launch of his touring exhibition across Europe.

In the following year, Xu was invited by the China Institute at Goethe University Frankfurt to hold an exhibition in Berlin. It might have been around this time that Xu met Trautmann, who was stationed in China and a member of the standing committee of German painting exhibitions. The two struck up a friendship and, as a gift to the ambassador, Xu created a painting dated ‘the eleventh year as the cold set in’ under the sexagenary cycle. The dedication referred to ‘the emperor’s ambassador’, reflecting Trautmann’s then position as diplomatic envoy stationed in China.

“Upon previously visiting Xu Beihong’s studio in Nanjing, I witnessed heaps of wastepaper piled up on the ground. The mountain of old sketches was actually drafts of the painting of cypresses he created especially for me, and is one of the most memorable pieces in my entire collection. This particular depiction of cypresses demonstrates a deep-rooted aura of grandeur and mystery rarely seen in any of Xu’s previous Chinese paintings. The trees rely on their roots to remain anchored to the ground. Yet after hundreds of years, they coil and knot together, enhancing their power so that even at a glance, they elicit thoughts of their towering might.”

Trautmann described Xu’s studio in Nanjing before and after the completion of Ancient Cedar Trees, and during his visits he would observe all the different drafts drawn up for this one piece, an indicative of the extensive creative process of the painter. The year after, Xu painted Cedar, which was among the paintings he selected for the 1933 exhibition in France. Cedar was a sensation as international critics heaped praise on the work, which was featured repeatedly in newspapers. Some even compared the Chinese artist’s work with those of Théodore Rousseau, master of the Barbizon school. Cedar was later acquired by the French government and is now at Musée national des arts asiatiques Guimet.

The friendship between Xu Beihong and Qi Baishi is well known in art history. Qi was the senior of the two artists by about 30 years. When they first became friends in 1920s Beijing, Qi's career was at a low point. He had not been long in the city and felt marginalised from the rest of the art world.

Although he is now one of the most beloved and well-known Chinese artists of the 19th and 20th centuries, Qi Baishi had humble beginnings and an unorthodox artistic trajectory. He was born into poverty in 1864 to a peasant family. He taught himself to paint using a manual, while also working as a carpenter to support himself. Qi was middle aged by the time he received a measure of success and recognition. Through prodigious talent and determination, he became a master of the meticulous gongbi technique of painting, and he would later turn to the xieyi mode of painting, which relied on spontaneous applications of paint. His works are focused on the spiritual, ephemeral and mystical qualities of the human condition.

Qi’s new style of painting was not initially well received, and the poor reception may be in part owing to prejudice against his lack of formal artistic training. However, there were those who saw the exceptional quality of Qi's art. Xu showed his deep appreciation, visiting Qi often to purchase his works and to persuade his friend to become a professor at the National Peking College of Art. Later Xu would also recommend Qi to Zhonghua Book Company, personally writing the preface in order to help his friend publish a collection of paintings. Qi demonstrably cherished their friendship by praising Xu in his verses.

Even though Qi had never left China, he became well known in Europe through several exhibitions of Chinese contemporary art. Among Qi’s early admirers was collector and diplomat Yakichiro Suma, who rubbed elbows with Trautmann in art and political circles. It was Suma who first recommended Qi’s works to Trautmann, claiming that ‘Qi could be considered the Paul Cezanne of the East.’ Trautmann thus became an enthusiastic collector of Qi’s paintings, developing a keen eye to the point that he could even recognise the artist’s unsigned flower-and-grass (caochong) works.

The favoured of subjects of the two great artists, two great friends, are quite fitting – one choosing upright cedars full of majesty and dignity, while the other choosing a brightly coloured flowers that neither fade nor wither. Xu Beihong's Ancient Cedar Trees and Qi Baishi's Amaranth will be offered in the upcoming Fine Chinese Paintings (11 October, Hong Kong) auction. 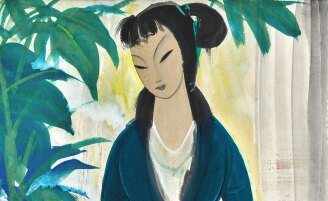