Barbara Hepworth and Her Assistants

A t the outbreak of World War II, Barbara Hepworth moved from London to Cornwall with Ben Nicholson and their young family in 1939.

Inside the Hepworth Studios | Tate

After the War, she purchased a larger space, Trewyn Studio, where she was to live and work until her death in 1975 – "It is completely perfect for me", she wrote to Philip James, Director of Art at the Arts Council, on 29 August 1949. Over the course of her time there many artists within Cornwall’s thriving artistic community visited Hepworth – either to exchange artistic ideas or to work as assistants and learn directly from a sculptor of her international stature. Many in turn became renowned figures within the generation of post-War British artists that flourished in Cornwall, and our November auction includes several examples by these artists.

The first assistants to join Hepworth were John Wells, Denis Mitchell and Terry Frost, coinciding with Hepworth’s large-scale commission Contrapuntal Forms for the Festival of Britain in 1951 that required additional help. Over the years, major sculptures produced in Hepworth’s studio navigated their way out of the narrow, winding streets of St Ives to international locations, such as Winged Figure (1961-2) for the John Lewis store on Oxford Street or Single Form for the United Nations headquarters in New York (1961-4).

John Wells had first visited Cornwall in the late 1920s encountering Ben and Winifred Nicholson and Christopher Wood in 1928. He remained in touch with the Nicholsons through the 30s and then with Ben and Barbara Hepworth on their relocation to Cornwall during the war. The organic, abstract forms of Wells’ paintings and the interplay of space and resonate with the work of Hepworth. He was at the centre of the post-war artistic community in St Ives although often overlooked, prompting Alan Bowness was to comment that his 'paintings and constructions ... have a purity and a quality that substantiate the claim that he is the most neglected major figure of the period' (Decade 40's: Painting, Sculpture and Drawing in Britain 1940-49, exh. cat., Arts Council 1972). After working in Hepworth’s studio, Wells shared a studio in Newlyn with Denis Mitchell for nearly thirty years.

Mitchell was employed by Hepworth on the recommendation of Bernard Leach, and worked as her principal assistant from 1949-59. During this period, he worked primarily in wood and stone and became an accomplished carver.

At Mitchell’s solo exhibition at Marjorie Parr Galleries, London in 1969, Patrick Heron declared Mitchell ‘the only important British sculptor junior to Moore and Hepworth who has never deserted the carved or hand-cut form as the sold vehicle of expression’ (quoted in Denis Mitchell Ascending Forms, Tate St Ives, exh. cat., 2005, p.8). Mitchell developed his own direction upon leaving Hepworth’s studio, particularly in his exploration of bronze from 1959, a medium Hepworth was yet to fully embrace, seen in dynamic vertical forms such as Thrust II or Landscape Form (see lot 338), which reference both the natural environment and Mitchell’s experiences of his previous trades, from gardening to mining (Mitchell was drafted to work at Geevor tin mine in St Just during the Second World War).

Another sculptor who joined Hepworth’s studio in the 1950s was John Milne, having first been a pupil to learn direct carving in stone and wood. He graduated to assistant firstly on a trial basis of three months -‘let us try’, Hepworth said, ‘we might not get on together’ (quoted in Peter Davis, The Sculpture of John Milne, 2000, p.79). He stayed for two years and it proved an invaluable experience, working under Hepworth’s supervision on multiple pieces.

On occasion Hepworth would say, ‘John, I can tell from the rhythm of your strokes that your wrist must be tired…’ (quoted in P. Davis, op. cit., p.81) and put him onto something else, cutting metal or drilling holes. Reflecting on the time in Cornwall, Milne recalled, ‘I could not think of any other place in England that impressed me more. That is why in 1957 I bought the property adjoining Barbara’s studio – Trewyn… There is only a wall between my studios and those of Barbara’s and her garden’ (ibid.) Milne’s work shows a similar aptitude for direct while from the mid-1960s experimentation with cold casting methods for bronze and aluminium led to some of his most significant and individual works (see lot 392).

The sculptor and painter Keith Leonard also joined Hepworth’s studio in the 1950s (1955-59). Like John Milne, he had widely studied modern sculptural practice, first at the Slade School of Art in London and then in Paris as a student of Ossip Zadkine, where wood carving was favoured, before moving to St Ives. He declared, ‘In the early fifties I gave up my post in charge of sculpture at college and came to work for Barbara Hepworth. The Whitechapel exhibition of her work impressed me tremendously for its purity and idealism’. Such a feeling for form is clearly evident in Leaning Form. After leaving Hepworth’s studio, he became an influential teacher in art schools in Farnham, London and Sutherland before finally returning to St Ives in 1984. 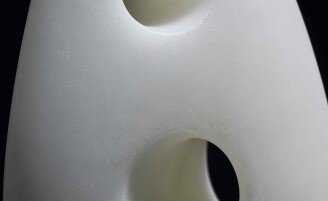