Banksy by the Numbers

By Sotheby's
The work of legendary street artist Banksy is immediately recognisable. Several of his pieces upcoming Sotheby's sales, Made In Britain on 18 September and Creating a Stage: The Collection of Marsha and Robin Williams on 4 October. Read on for an in-depth look at this mysterious figure.

T he year of Banksy's birth is believed to be 1974 – though, given how closely guarded a secret his identity is, that has never been confirmed.

He made his name as a street artist in the city of Bristol in western England. He then moved to London, where an estimated 15 works of his can still be found in public places.

In 2004, Banksy produced and released into circulation a small quantity of spoof £10 notes. He replaced the standard headshot of Queen Elizabeth II with one of Diana, Princess of Wales, and changed the text at the top of the note from 'Bank of England' to 'Banksy of England'.

For his first, official gallery exhibition in London – Crude Oils in 2005 – Banksy filled the pop-up venue with 164 live rats.

The record price for a Banksy work at auction stands at $1.87 million, for Keeping it Spotless, a Damien Hirst spot painting over which Banksy stencilled the image of a hotel maid. It sold at Sotheby's New York in 2008.

In 2009, he held a huge exhibition in his home city, Banksy v Bristol Museum, which attracted 300,000 visitors. He asked Bristol City Museum and Art Gallery to pay him the nominal fee of £1 to stage it there.

Banksy appeared in the 2010 edition of Time magazine’s prestigious TIME 100 list, an annual selection of the 100 most influential people on earth. (For the picture accompanying his entry, the artist supplied one of himself with a paper bag over his head.)

At the 83rd Academy Awards ceremony, in 2011, Banksy’s film Exit Through the Gift Shop, was nominated in the Best Documentary category.

One of Banksy's best-known works, Kissing Coppers (featuring a pair of policemen in a passionate embrace), could be seen on the wall of the Prince Albert Pub in Brighton for 7 years. In 2011, though, the pub's owners decided to remove and sell the mural, declaring the earnings would be used to revamp their establishment.

For the summer of 2015, Banksy opened an alternative theme park – called Dismaland – in a disused lido in the English seaside town of Weston-super-Mare. Banksy himself was among 58 artists who contributed elements to it, others including Damien Hirst, David Shrigley and Jenny Holzer.

In a 2017 poll of UK arts writers to discover the nation’s favourite art work, Banksy’s Balloon Girl came out Number 1, ahead of Constable’s classic 19th Century painting, The Hay Wain.

Banksy recently opened a hotel in Bethlehem, just yards from the controversial West Bank barrier that separates Israeli and Palestinian territory. Called 'The Walled Off Hotel', it has 10 rooms. 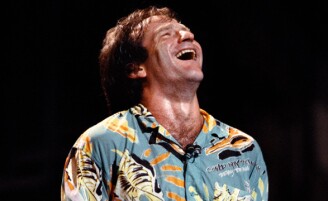