An Act of Generosity: The Edward Albee Collection

P ulitzer Prize-winning playwright Edward Albee (1928–2016) is remembered as a man of complex intellect. But his view of cultural patronage was simple. “It seems to me,” he explained to television talk show host Charlie Rose in a 2008 interview, “if you have the ability to help other people in the arts, it’s your responsibility to do it.” A passionate collector fuelled by a belief in the necessity of art, Albee honoured that pledge generously, formalising his dedication to artists with the 1967 establishment of the Edward F Albee Foundation, which continues to make contributions following the playwright’s passing.

To build on Albee’s vibrant legacy, the foundation is now selling more than one hundred pieces from his personal collection of Impressionist and early 20th-century avant-garde art, African sculpture, American post-war paintings, prints and more in a dedicated auction at Sotheby’s New York on 26 September. Albee lived surrounded by many of these works in his loft in New York’s TriBeCa, which he called home for more than three decades.

By the time he established his foundation, Albee had already begun collecting art, and his commitment would steadily increase. The thirtysomething writer had just earned sizeable proceeds from the sale of the film rights to his 1962 play Who’s Afraid of Virginia Woolf? to Warner Bros. The studio had decided to cast the roles of Martha and George, the play’s notoriously acrimonious couple, with Hollywood’s most notorious and acrimonious couple at the time, Elizabeth Taylor and Richard Burton – and the resulting 1966 film was a smash hit. It received thirteen Oscar nominations and won five, including a Best Actress statue for Taylor.

In the wake of this overwhelming windfall, Albee decided to start a residency where artists, writers and composers could hone their craft away from an audience. The only requirement for receiving a spot and his support was talent. Uta Hagen, the actress who originated the role of Martha on Broadway, encouraged Albee to explore Montauk, on the eastern end of New York’s Long Island, as a possible home for his foundation, and the playwright instantly fell in love with the seaside village. He soon purchased The Barn, a rural building formally known as the William Flanagan Memorial Creative Persons Center, and fixed it up. By the early 1970s, The Barn was regularly welcoming fellows, and today it grants around twenty residencies annually.

ALBEE AT A REHEARSAL FOR ONE OF HIS PLAYS, 1982. PHOTO BY RAY FISHER/THE LIFE IMAGES COLLECTION/GETTY IMAGES.

Allan Schwartzman, a chairman of Sotheby’s Fine Art division, received a month-long residency at The Barn in 1982 to work on a novel. “As I look back on it,” he says, “it was the most significant experience for helping me to understand who I am as a writer.” Schwartzman recalls how Albee would stop by The Barn from time to time and occasionally join the residents for dinner. He describes the playwright’s presence as “imposing” but also “energising” to those around him. “He might have appeared intimidating or somewhat unapproachable, but there was always a bemused smile behind it all,” says Schwartzman. “And that’s where you could see the art lover and supporter.”

Albee’s support of artists didn’t stop there. He was a voracious collector, and although he acquired works by such established names as Louise Bourgeois and Milton Avery, he reportedly loved nothing more than to discover new talent. He never worked with an advisor or consulted a curator, preferring to seek out and acquire works all on his own; after all, only he could know which art “belonged” to him and which did not. He kept track of what was coming up at auction, regularly made rounds to galleries and visited artists’ studios, earning a reputation for finding the painting or sculpture that an artist may not have considered “representative” and therefore kept hidden from view.

According to Jakob Holder, a playwright and the foundation’s executive director, Albee did not call himself a collector, feeling that it was an inaccurate label. “Accumulator” suited him better, since he didn’t buy art as a matter of investment or hobby – he bought it for the quality of communication he could have with it. “Creativity cannot breathe in a total vacuum,” Albee wrote in his landmark 1966 essay Creativity and Commitment. Living among his collection, he created that inspiring atmosphere.

Albee’s wide-ranging collection filled not only his New York home but also his other residences, and his guests might have seen African and Oceanic art and masks, Tiffany lamps and Chinese tea bowls displayed alongside drawings by Josef Albers and John Cage, or an abstract painting by Lee Krasner. Holder remembers once noting an uncharacteristically bare expanse of wall in the playwright’s loft and telling him how smart it was to allow a space where the eye could rest and refresh itself to see his collection anew. “Oh no,” Albee corrected Holder. “I’ll get to that eventually” – a wry truth plainly spoken, as though he’d pulled it from one of his own plays.

Jennifer Krasinski is an art columnist for The Village Voice. 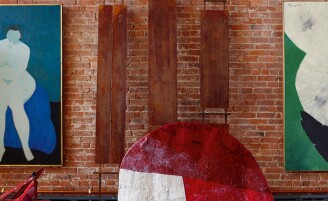