T he Italian artist Alighiero Boetti (1940-1994), claimed descent from an 18th century Dominican monk called Giovanni Battista Boetti. The details of Giovanni’s life are sketchy, but it’s believed that he converted to Islam while on a mission in Mosul, changed his name to Sheikh Mansur and ended up leading a Chechen rebellion against Catherine the Great’s Russia. Whatever the truth, the tale provided a convenient origin story for Alighiero, when he made twice-yearly visits to the Middle East in the 1970s. He claimed he was following in the footsteps of his great ancestor.

The artist’s destination of choice was always Kabul, a city so dear to him that he even opened his own guest-house there, called the One Hotel. Boetti’s first visit to Afghanistan, in 1971, lasted a few months, and he admitted that – as well as family history – what attracted him east was the search for a peaceful place of unspoiled beauty. ‘I was fascinated by the desert… the bareness, the civilisation of the desert,’ he said.

In this respect, he wasn’t obviously different from those westerners who undertook the then-trendy Hippie Trail: an overland journey from Europe to Asia, in a bid for spiritual enlightenment, easy living and copious dope.

What set Boetti apart, however, was his sustained engagement with the region; and what he gave back to it, in the form of jobs he offered hundreds of local craftswomen who helped with his art. He relied upon their embroidery expertise for the numerous tapestry works he began making. His most famous works in the medium were part of a series called Mappe (‘Maps’). Around 150 were made, from 1971 right through to 1994, the year of Boetti’s death. Each tapestry consists of a map of the world (in the manner of those found in atlases), but with every country marked by the colours of its current flag.

One of the finest Maps, completed in 1978, is being offered at Sotheby’s in London on October 14, as part of the Contemporary Art Evening sale. The series as a whole marks the shifts in geopolitics in a 23-year period during and just after the Cold War: most notably, the collapse of the Soviet Union but also the decolonialisation of certain African countries. Less literally, it forms a symbolic portrait of the passage of time.

Like Andy Warhol, Boetti rejected the old notion of the artist as a privileged, solitary genius. He preferred an approach that was more collaborative. When it came to the Mappe, though the concept for the series was his, it was the Afghan women who executed every square centimetre of tapestry. It’s worth adding that the fine Bokhara stitch used in Kabul demanded extremely long production times: a single Map might take four embroiderers a whole year to make, sometimes more.

"I did nothing for [those works], in the sense that the world is made the way it is, and I have not drawn it. The flags are those that exist anyway, and I did not design them."

However correct he was to credit his collaborators, Boetti was being unduly humble here. His act of delegating the embroidery was a bold artistic move in its own right. Indeed, he allowed for more creative freedom than is often appreciated. For a start, he let the needle-workers choose some of the short texts that run around the borders of each map. (These were the texts written in Farsi script, to be precise, which often consist of excerpts of Sufi poetry. Other tapestries – such as the one coming to auction – have the border texts written in Italian, and these were chosen by Boetti, usually featuring a mention of his name and the date of production.)

More strikingly, Boetti also let the embroiderers decide the colour of the ocean – which, given that water covers 70 per cent of the earth’s surface, was a generous move. Doubly so, since these women were from a landlocked country. They had never seen the sea and, as such, ended up representing the ocean in pink, purple, yellow, black and grey, as well as blue.

In the case of 1978’s Mappa, they opted for blue, but not just one shade. A range of blues are deployed which vary considerably in depth. This has the wonderful effect – whether intentional or not – of suggesting variations in the depths of the water.

The chromatic beauty of this series belies the often-violent events that force maps to change so regularly. Rather poignantly, the tapestry coming to auction is one of the final Mappe executed in Afghanistan itself. In the wake of a Communist coup in April 1978 and the Soviet invasion of the country the following year, Boetti’s weavers fled to the Pakistani city of Peshawar for safety (and henceforth took up production there). Their own map had been changed irrevocably. 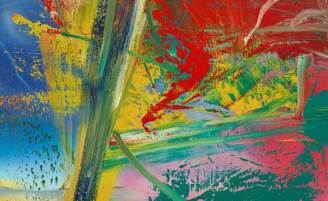