A mong the highlights of the upcoming Old Masters Evening sale in London on 5 December is one of Jan Brueghel the Elder's earliest works An extensive coastal landscape with fishermen landing and selling their catch, the sacrifice of Jonah offshore. He painted it probably at the end of his stay in Rome, before his departure for Milan where he is recorded in the same year. His principal patron in Rome was Cardinal Ascanio Colonna, although he was already employed by Cardinal Federico Borromeo, but his pictures are found in other Roman collections at an early date, and this one was in the Barberini collection by 1644, and probably a decade or two earlier.

It is a pioneering work, and one that was to prove influential, both on Jan Brueghel's own pictures, and on those of his contemporaries. Its excellent state of preservation makes it easy to read his subtle brushwork, even in the darkest parts, and helps us readily to understand why his paintings were so much appreciated at this early stage of his career in Italy.

This painting combines two types of subject from Brueghel's early career: marines; and harbour or beach scenes with fishermen. He painted several stormy marines on copper plates, including two of Christ on the Sea of Gallilee. The present picture is distinctive in the way Jan Brueghel paints the disturbed green sea under the deep shadow of storm clouds, while retaining a high degree of clarity in the modelling. In this painting, notwithstanding the sun attempting to peer from behind a cloud, the meteorological conditions are so extreme as to make the scene almost as dark as night. The extensive landscape, almost a panorama, seems to be reinventing the World Landscape tradition of earlier in the Century, so that night has arrived at the offshore right hand part of the composition, while parts of the left hand landward side – some figure groups, parts of the distant town, are lit by the largely diffused light of the sun, and the vast rocky outcrop that projects from the coastal water leaves an almost black shadow on the side of the viewer.

In this work we see the legacy of the artist's father Pieter Bruegel the Elder – a legacy largely confined to Jan Brueghel's earliest works. Although Jan was only about four when his father died, it seems likely that he would have known at least some of his paintings. The conception of the World Landscape is nowhere more apparent in works associated with Pieter Bruegel than in the contested Fall of Icarus, in which the broad compositional arrangement of a shoreline to the left rising to peaks, figures prominent in the left foreground and a ship to the right, with a limitless horizon beyond, is the same as in the present picture. Jan Brueghel would certainly have been familiar with Frans Huys' engravings of ships based on Pieter Bruegel's designs, which he freely adapted, including here. Jan Brueghel would also have known Paulus and Mathijs Bril's stormy marines, including Paulus Bril's fresco of The Sacrifice of Jonah painted in 1589 in the Scala Santa.

While Jan Brueghel's marines are limited to his early career, his harbour and beach scenes, of which this is his earliest dated example, form an important part of his oeuvre for much of the rest of his career. Brueghel used these compositions facing in both directions, and the earliest dated example, the Departure of Saint Paul of 1596 in Raleigh, North Carolina, is in reverse so the open water is to the left. Of similar orientation to the present picture are the two similar depictions of a Seaport with Christ Preaching, one undated in a private collection, the other of 1598 in Munich, Alte Pinakothek. The former is of particular relevance to the present picture, because it features a dark and stormy atmosphere, with very dark clouds over the sea to the right, and a figure leaning on a crook with his back to the viewer in the centre foreground, pointing to the figure of Christ. Further variations appear in pictures dated 1600s, and then recur less frequently in Brueghel's later work. 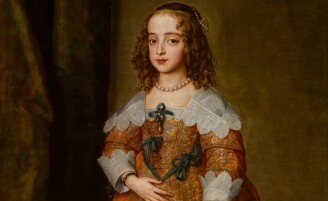