“I have always been restless. What I did was reformulate the dimensions of Brazilian furniture, because it was really uncomfortable. I have defended craftsmanship with all my heart, against the kind of industrialisation that debased furniture."

L usitanian heritage had a strong influence on the evolution of furniture and the interior design of the Brazilian house, particularly in terms of woodwork craftsmanship. Side by side with imported furniture from Portugal and other European countries, the local furniture production was gradually intensified by the skillful work of native and Portuguese artists and craftsmen who settled in Brazil. The result was an unique mixtures of colors, textures and techniques that marked the construction of the identity of a country.

As from the second half of the 19th century, the evolution of furniture in Brazil increased in complexity and there appeared a significant number of cabinetmaker’s shops and factories producing a large variety of furniture styles. At the end of the 19th century, mechanization increased and contributed to the manufacturing processes. The presence of workmanship combined with Brazilian bountiful flora, developed a local tradition in wooden furniture, with greater intensity in the work of some 20th century designers’ pioneers.

Joaquim Tenreiro (1906 – 1992) was one of these pioneers, a Portuguese artist and artisan who settled in Brazil in 1928, doing portraits and landscapes, and performing a lyrical interpretation of the hills of Rio de Janeiro. He was a remarkable artist and designer who made Brazilian design famous around the world, revealing this mélange and dialogical origin that manifested the relation between Americas and Europe in creation and craftsmanship.

Tenreiro inscribed his name in the art and design history via painting, sculpture and furniture design. He was a precursor in the search for a new furniture style as from the forties. Since his childhood in Melo, a tiny village in northern Portugal, he loved wood, and he told me, in an interview: “Wood is an old companion of mine!”. His passion towards wood also revealed his respectful nature appraisal.

His admirable talent, familiarity, understanding of the nature of wood and its technical possibilities, together with the richness of Brazil’s tree species diversity led him to a major artistic achievement. Tenreiro managed to perform impressive work with Brazilian wood and in some pieces using other native materials, such as straw. The first version of the Three Legged Chair , [Cadeira de Três Pés] c.1947, offered in the upcoming Important Design sale was commissioned by José Silveira Sampaio (1914-1964), physicist and theater director who owned a small pocket theater at Praça General Osório, Ipanema, Rio de Janeiro. The chair, made in Jacaranda and Amendoin, was commissioned for the set design of the play “On the Necessity of Being Polygamus”, from the Trilogy of the Grotesque Hero”. This chair played an important role in the appropriation of scenic space and into the theatrical rhetoric narrative of polygamy, represented with the three legs.

The chair has a high artisanal quality of production, it makes an elegant use of native Brazilian wood, expressing thus Tenreiro’s love and expertise in traditional woodworking techniques and regarding the mélange and dialogical origin. But what makes this chair so distinctive and relevant as ever? It is a great reference to a new generation of designers, stressing the vital role of the craftsman’s wisdom. It provides a glimpse into Tenreiro’s mystical relationship to wood. It reveals the genius of a master and his crafts-based production, or as says the lyrics of a famous song: “A chair is still a chair, even when there’s no one sitting there”(Hal David). Let's cherish Joaquim Tenreiro craft! 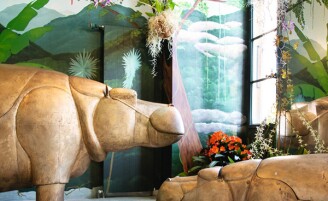