W hen one speaks about botanical books or gardens, the first images that spring to mind are most often of delicate roses, fragrant lilac blooms and the exotic bursts of colour found in birds of paradise. While sharing the beauty that the natural world offers is one purpose of creating a botanical garden or book, the original goal was more scientific: to serve as a record of various genus and species of plants in order to develop a taxonomy, showing the differences and similarities between the species and to record their various properties and uses. In fact, if one takes the time to look through some early botanical books closely, you might be shocked to find innocent and matter-of-fact depictions of mind-altering plants that have become or are becoming highly controlled substances. Below are five such plants found amongst those in our upcoming sale of the Magnificent Botanical Library of D.F. Allen.

The oldest, most potent and potentially most dangerous narcotic of natural origin is derived from an unassuming tropical shrub native to certain regions of Peru, Ecuador, Colombia and Bolivia. Ancient Incas chewed the leaves of the plant in order to increase the speed of their heartbeats, and thus increase their oxygen intake in the extremely thin air of their high altitude mountain environment. It wasn’t until 1859 that the German chemist Albert Niemann first extracted Cocaine from Coca leaves, and by the late 19th century, the drug was widely used, counting the likes of Sigmund Freud, Robert Louis Stevenson and even the fictional sleuth Sherlock Holmes amongst its devotees. The drug reached a peak of popularity when John Pemberton added the coca leaf as an ingredient in his new soft drink Coca-Cola. The drug was officially banned in the United States in 1922 after the dangers of the drug finally became evident, and today it is the second most trafficked illegal drug in the world. In the above illustration, we see that the plant was also native to some islands in the Caribbean (although that no longer seems to be the case), as it is illustrated in the 1763 Viennese work on the plants of the West Indies, including Martinique, Jamaica and Domingo (known as Haiti and the Dominican Republic).

Pictured above in William Barton’s early 19th-century work A Flora of North America, tobacco had been in use in the Americas for centuries before the arrival of Europeans. Experts believe that the plant may have begun growing in the Americas as early as 6000 BCE, and that around 1 BCE inhabitants began to enjoy the effects of the plant in various ways, including smoking and chewing. The earliest pictorial depiction of a person smoking tobacco was found in Uaxactun, Guatemala on a clay vessel dating from before the 11th century. With the arrival of Europeans in the Americas, the recreational use of tobacco would spread throughout Europe and as far abroad as Japan with the 16th century seeing a rapid spread of recreational use, primarily brought on trading vessels by sailors eager to trade their new commodity. The next several hundred years would be profoundly impacted by the trade in the plant, and by the 18th century, sales of the plant in the Americas began to be regulated and taxed as it became a cornerstone of the American and eventually global economy.

Many may recall the 1930s American propaganda film Reefer Madness, conceived to teach parents about the dangers of cannabis use. Film posters were captioned with phrases such as “The deadly scourge that drags our children into the quagmires of degradation – your child may be next!” The paranoid storyline tells the tale of a group of dope-smoking high school students who spiral out of control into a world of suicide, murder, rape and madness brought on by marijuana addiction. Decades later the “Just Say No” campaign and “D.A.R.E.” programs of the 1980s and early 1990s sought to teach Gen-Xers about the horrors associated with cannabis use. Today, given America’s long history of demonizing the plant, it is perhaps surprising to see the gradual reversal of policy; legalized cannabis production has become a major economic player in many states. Yet legalized cannabis production is not entirely a recent event. Hemp was in fact an important cash crop for early American colonists. Indeed, the ritual use of cannabis appears to have been widespread in the ancient world – the earliest record dates back to the third millennium BC from charred remains found in a ritual brazier at an ancient burial site in present-day Romania. There is also evidence of recreational use throughout Europe in the 17th and 18th centuries, as well as many records of it being legally used as a medical ingredient throughout the 19th century. In the above illustration, from Philip Miller’s Gardener’s Dictionary, we see the ostensibly humble cannabis plant delicately hand-coloured and depicted in fine detail, highlighting the natural beauty and dignity of this oft-maligned plant.

This innocent-looking plant made national headlines in 2010 when footage was leaked on the Internet of pop star Miley Cyrus smoking the Salvia divinorum or Diviner’s Sage species. Depicted above in Philip Miller’s 1760 Gardener’s Dictionary, Salvia is the largest genus of plants in the mint family, and is one of several genera commonly referred to as sage. It is found throughout the Americas and the Old World, with ninety different species in Eastern Asia, 250 in Central Asia and the Mediterranean and approximately 500 in Central and South America. Until the mid-1990s the plant’s properties were only known to the Mazatec Indians of Oaxaca, Mexico, whose shamans use it ceremonially to access what they believe to be the supernatural world. A small handful of anthropologists were aware of it, but were dubious as to its psychoactive properties, and it was not discussed publicly until the mid-1990s when ethnobotanist Daniel Siebert discovered the psychoactive properties of salvinorin A, the chemical compound found in its leaves. While the use and possession of Salvia divinorum is legal in most states, many are quickly enacting new legislation to control and regulate the substance.

The delicate bloom depicted in the above illustration is perhaps one of the most powerful flowers on the planet. Referred to as “God’s own medicine” by a founder of Johns Hopkins Hospital, Sir William Osler, the potent painkiller opium and its derivatives morphine, codeine, heroin and oxycodone are all made from the gum that oozes from cuts made in the unripe seed-pods of this vibrant plant. Opium is legally grown in India, Turkey and Australia, where together over 2,000 tons of the gum is produced annually as a raw product. But the majority of the world’s opium is grown in Afghanistan – where the majority of the product is eventually synthesized into the street drug heroin. The earliest known reference to opium use dates to 3,400 BC in lower Mesopotamia, and from there it spread quickly to Assyria and Egypt. From the Mediterranean, in went along the Silk Road to China where it eventually led to the Opium Wars of the 19th century. While the Papaver somniferum has the highest concentration of narcotics, all poppies of the Papaver genus contain some amount of narcotic. It is interesting to note that the majority of poppy seeds used for cooking come from the opium poppy Papaver somniferum, and consumption of the seeds have been known to produce a positive result on a drug test. Keep that in mind the next time you reach for a poppy seed bagel! 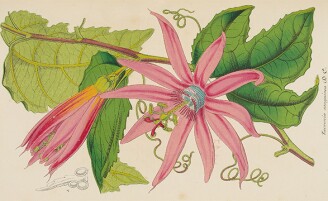