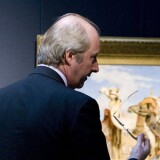 Lord Mark Poltimore joined Sotheby’s in 2002, and is Deputy Chairman of Sotheby's Europe. He is one of the main auctioneers at Sotheby's and has been involved in major client and business development activities in Europe and the new markets in Russia and the Middle East.

Lord Poltimore has been in the auction world for 30 years specialising in Impressionist Art and 19th Century Pictures. He joined Christie's in 1977 and became Director and Head of their 19th Century Pictures department. He pioneered many of the first themed sales of Scandinavian, German and Spanish pictures in the 1980s and was later appointed Deputy Chairman of Christie's Europe (1998–2000).

As Chairman of Sotheby’s Russia, he travels regularly to both Russia and Ukraine, and along with the international Russian Art department has helped develop a strong client base in both countries. Lord Poltimore was present in May 2007 at the opening of Sotheby’s in Moscow, which has brought a higher level of client service to buyers and collectors based in Russia. Sotheby’s sales of Russian Art have grown 300 percent in nine years, from $6 million in 2000 to more than $180 million in 2007, emphasising that Russia has become an increasingly important and dominant international art centre.