T uesday, 14 May was a monumental night at Sotheby’s New York, as 56 works from some of the greatest artistic masters of the 19th and 20th century garnered an incredible $350 million. The Impressionist & Modern Art Evening Sale's remarkable results speak to both the magnitude of the spring auction's consignor collections and the dynamic power of today’s art market. 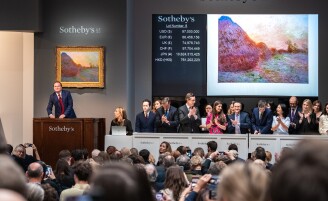 Claude Monet’s Meules was the evening’s undoubted winner, with a winning bid of $110,747,000. The sale sets a new artist record price for a work by the artist, outdoing the previous benchmark of $84.7 million. What's more, the masterpiece is the first work of Impressionist Art to sell for more than $100 million at auction. In just eight minutes, six bidders fought hard for the masterpiece – but there could be only one winner. Meules is considered the crowning achievement of Monet’s Haystacks series, but the present work has not been seen at auction since its sale to a prolific collector in 1986. Given this, Tuesday’s sale was a rare opportunity for buyers to appreciate the sublime work of a profound master.

It was a glorious night for Latin artists Rufino Tamayo and Joaquín Torres-García, as well. Tamayo’s Sandías, a remarkable work of oil and marble dust on canvas, sold for $4,933,900. In the work, eight slices of red watermelon stand out against a dusty pink and hazy, rust-colored background. Fruit is the pervasive theme in Tamayo’s work – critics often connect the images to the artist’s personal history, Mexican culture, or both. But the show didn’t stop there: the sale of Torres-García’s captivating Construcción en blanco for $3,380,000 shattered the artist’s previous record of $2.1 million. 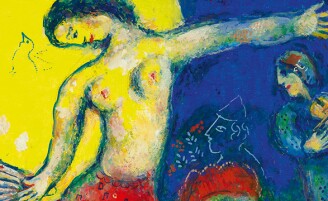