A mong the beautiful pieces presented in the next African and Oceanic Art auction that will be held in Paris on 21 June, there are several masterpieces which, through their exceptional aesthetic qualities, testify to the artistic genius that underlies their creation, and engage us in a face-to-face, an exchange of views, a dialogue asserting the universality of the artistic language.

The visage is a face only in the face-to-face.

Beauty is in the eye of the beholder.

1918. The war was over and Paul Guillaume was on his way to making his gallery one of the cultural highlights of Paris. To promote it, he created the magazine Les Arts à Paris where - under various pseudonyms - he kept readers abreast of the latest artistic events in the capital. The cover of the fifth issue, published in 1919, featured an engraving of this Ngbaka mask. As a brilliant advertiser Paul Guillaume knew the importance of a strong visual identity and he chose this mask as the logo of his gallery for a while. Its image particularly stands out in the inset that he published in the famous third issue of Action magazine, where Picasso, interviewed by Florent Fels, declared "Negro art? Never heard of it!" (Fels, "Opinions sur l’art nègre", Action, April 1920). The mask, crowning a list of artists endorsed by Paul Guillaume - Derain, Matisse, Modigliani, Picasso, Vlaminck - was there as a testament to the place of Negro arts in the artistic avant-garde for the aesthetic modernity it embodies: "the expression of the masks is defined by their construction, their architecture. Everything is aesthetic. Outlines and planes” (Clouzot and Level, 1919).

A primordial element in Maori culture, the head was regarded as the most sacred part of the body - a seat of knowledge and power. Ubiquitous in sculpted decors, particularly large in scale in Tiki sculptures, this motif reaches its apex in the standalone heads sculpted in wood, which personify the very essence of Maori art. The exceptional treatment of the face, completely covered in curvilinear tattoos - asymmetrical on the forehead - and the very beautiful abalone incrustations marking the eyes and the teeth in a brilliant blue, this work is one of the most accomplished within this narrow corpus. As portraits in their own right, they were displayed on wooden palisades during great ceremonies or affixed on sculpted bodies, they embodied the presence and mana of the most important ancestral figures, laying their strikingly blue gaze upon the world of the living.

The face exchanges its glance in the face to face.

The face of this mask is a testament to the virtuosity of Yaure artists of the past. The refined features bloom into an oval girded with a collar that magnifies it in a well-balanced interplay of curves and counter-curves. Three strips of brass give the face a supernatural radiance, that of an apparition rising from the darkness – this would seem true as, the bearer emerges from the sacred wood where he dons his regalia. The face of the person standing atop the mask complies with the same principles of refinement and reverence. A symbol of the wild, the lively, unpredictable antelope is symbolised through its ringed horns and thus opposes the tranquillity of the domestic universe suggested by the face, but also transfigures it: with the duplication of the human figure, the outside space is firmly restrained, subjugated and integrated into the harmony of the partnership. Selected by Eberhard Fischer and Lorenz Homberger as the first illustration for their book dedicated to the Master sculptors of Côte d'Ivoire ("Maîtres de la sculpture de Côte d'Ivoire"), this mask symbolizes, through its exceptional artistic qualities, the universality of the masterpieces of African art.

The ancestral and sacred power of this Kanak mask asserts itself through its size and the sheer scale of its forms. During enthronement ceremonies, the mask reinforced the authority of the new chief through its supernatural power.  This is evidenced by the powerful aesthetics of the sculpture and the strength that emanates from the boldness of the features that were once embellished with an imposing headdress and a long beard. Freed from the abundance of these external elements, the structural impact of this figure is transcended by the potency of the facial features' concentration rather than their exaggeration, which is a sign of its anteriority. The thick dark patina, made up of successive layers, accentuates the visual shock produced when the mask makes its ceremonial appearance and the black colour evokes the world of the original beings. (Boulay, De jade et de nacre. Patrimoine artistique Kanak, 1990, p. 145).

You frighten. You astonish.

Collected by Captain Janus Srensen in 1924, this mask, in accordance with the Ammassalimiut artistic tradition, evokes a grimacing and asymmetrical face. The poignancy of the almond-shaped eyes with their pierced pupils is emphasized by the shape of the eyebrow and the furrows of the deeply carved tattoos, marks of initiation that once adorned women's faces. The torsion of the shapes imposed by the artist, particularly marked in the nose and the distended mouth, refers to the need for the angakoq (shaman) to make himself unrecognizable whilst among the spirits in order to avoid any vengeance. Largely free of the lampblack that once covered its entire surface, the mask comes alive through the red and brown iridescence of the driftwood, in which it was carved.  This work, striking in the aesthetic modernity of its reinvented human face, reveals the creativity of the artist who, whilst making use of traditional codes, asserted the individuality of his own talent.

Art is contemplation, it is the pleasure of the mind, which searches into nature and which there divines its spirit.

Unique within each chiefdom, these masks were the prerogative of royalty and only came out during great royal funeral ceremonies to pay homage to the deceased king and assert the authority of his successor. Like the panther or the elephant, which are more frequently represented, the symbolism of the buffalo is associated with the image of royal power and the protective force of life. Rarer still are the masks entirely covered with glass beads, as is the case here. The preciousness of the materials, their emblematic power, and the virtuosity of their layout all attest to the eminent importance of the work and its great antiquity. The striking formal and chromatic dynamics,  emphasized by the shades of the translucent pearls when brought into the light,  reveal the talent of the artist and place this mask among the masterpieces of the art of Cameroon.

Should you paint what is on a face? What is in a face? Or what is hidden behind a face?

Loaned in 1956 by artist Jean Willy Mestach for the famous Antwerp exhibition - Le masque. De tous peuples, de tous temps - this mask, then incorrectly attributed, is part of one of the rarest corpora of African art: that of the Attie, or Akye masks (Côte d'Ivoire).  In 1965, William Fagg attributed this archaic corpus to the Attié, an Akan people living in the south of Côte d'Ivoire, near the Baule and the Anyi.  Observed in 1898 in the region of Ano, by explorer Camille Dreyfus  (Dreyfus, A la Côte d’Ivoire, six mois dans l’Attié (un Transvaal français), 1898, p. 135), the mask’s use ended soon after.  With its almost flat face, girded by a serrated frieze figured as a chinstrap beard, this mask stands out for the modernity of its formal and pictorial language.  A rare specimen of a forgotten tradition, this mask asserts its archaism through its partially crusty patina and polychromatic swathes.

The work arises in and of its time, but it becomes a work of art through what evades it.

Beautiful incarnations of the arts of Africa and Oceania, these creations direct our gaze upon timeless faces forged by remarkable artistic identities. Be they ancestor figures, reflections of an idealized beauty or representations of a spiritual power, they transcend their respective creative context to assert themselves as universal masterpieces of the history of art. 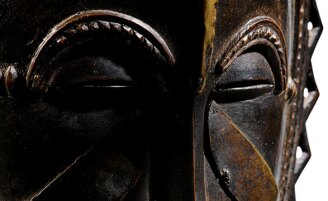