Design Masterworks with Exceptional Provenances, from the Maharaja of Indore to Andy Warhol

T he masterpieces comprising Sotheby’s Modern Masters: Chefs-d’œuvre d’une Collection Privée (11 December, New York) represent the highest level of excellence in terms of artistry, craftsmanship and provenance. This unparalleled single-owner collection presents rare and superlative works by artists including Alberto Giacometti, Marcel Coard, Joseph Csaky, Gustav Miklos, Émile-Jacques Ruhlmann, Jean Dunand, Jean-Michel Frank and Pierre Legrain. “I strove to acquire pieces that represent the very best in quality by each artist," says the prestigious collector behind Modern Masters, which features art and objects formerly in the collections of Andy Warhol, Mona von Bismarck and the Maharaja of Indore, among others. "I focused on the provenance of pieces that had to be impeccable. I paid a lot of attention to the past of each of these objects and who owned them, trying to only acquire works that came from the most important collectors of the period.” Individually, these luxurious works represent some of the most significant and taste-making innovations in design of the last century, placing them indelibly within the wider context of the Cubist and Modernist Art movements. The collection forms a coherent narrative knitting together pieces from eminent private collectors, important art dealers and the personal collections of the artists that are a testament to their outstanding quality and history. 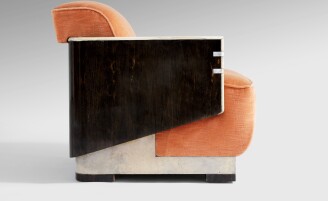 Yeshwant Rao Holkar II, also known as the Maharaja of Indore, was a central figure of the European decorative arts scene of the late 1920s and early 1930s. The commission of his Modernist palace of Manik Bagh in India resulted in tremendous excitement among designers and creators in Paris. His encounter with Jacques Doucet in Paris and close relationship with the architect Eckart Muthesius profoundly changed the Maharaja’s plans to furnish and decorate his Indian home and convinced him that modern art and design was a direction worth pursuing.

Muthesius, upon Holkar’s request, agreed to oversee the architecture of the couple’s private residence as well as its interior decor. The core furniture, lighting and interior was designed by Muthesius himself in accordance with his modernist architectural vision with the intent to create a complete work of art. The important floor lamp in Alpaca silver (lot 27) is one of six different floor lamp designs created specifically for the palace. Recently, the floor lamp was requested by the Musée des Arts Décoratifs in Paris for their ongoing exhibition focusing on the Maharaja Indore, Moderne Maharajah, Un Mécène des Années 30. Another item requested for this exhibition is a Chaise Longue, executed in luxurious black lacquer (lot 26). Though the chaise was not used for the palace, the model has become emblematic of the avant-garde designs conceived for this historic commission. 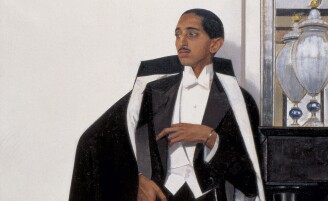 Jacques Doucet, the famed Parisian couturier and art collector, is one of the earliest figures who is responsible for the commission of important pieces such as a unique armchair by Marcel Coard (lot 18) and Tête de Lionne by Joseph Csaky (lot 17). In 1920s Paris, his close collaborations with innovative creators paved the way for modern art collecting and inspired future fashion designers like Yves Saint-Laurent to curate their own collections.

The “Grande Feuille, Version Fine” floor lamp by Alberto Giacometti (lot 7) is enriched by illustrious provenance, having once belonged to international socialite Mona von Bismarck. Von Bismarck was a fixture in the avant-garde artistic circles of her time. She was photographed by Cecil Beaton, Edward Steichen and Horst P. Horst, and was immortalized by Salvador Dalí in an iconic painting (offered at Sotheby’s London in 2013).

She purchased works by Francisco Goya, Giovanni Battista Tiepolo and Jean-Honoré Fragonard to furnish the homes that she owned in New York, Paris and Capri, where she entertained guests such as the Duke and Duchess of Windsor, Winston Churchill, Aristotle Onassis and Maria Callas.

Templeton Crocker, the celebrated American librettist and explorer, commissioned Jean-Michel Frank, Pierre Legrain and Jean Dunand to help furnish the interior of his San Francisco penthouse. The Jean-Michel Frank marquetry chair (lot 11) was likely included in Crocker’s study where the walls and ceilings were also fully covered in straw marquetry.

An important desk and wastepaper basket (lots 9 and 10), also by Jean-Michel Frank, once inhabited the magnificent Château de la Croë in Antibes, France. The palace was built in 1928 by Armand-Albert Rateau for the British aristocratic couple, Sir William Pomeroy Burton and his wife, Lady Barbara.

The Duke of Windsor, formerly King Edward VIII, and his American wife, Wallis Simpson were captivated by the Château and leased the property for a period of over ten years, between 1938 and 1949. While the precise date that these pieces first entered the Château de la Croë is undetermined, that they inhabited such a luxurious residence comes as no surprise. Both the desk and wastepaper basket typify Frank’s iconic style—absent of any decoration, their forms refined to the purest lines and volumes and covered with luxurious vellum.