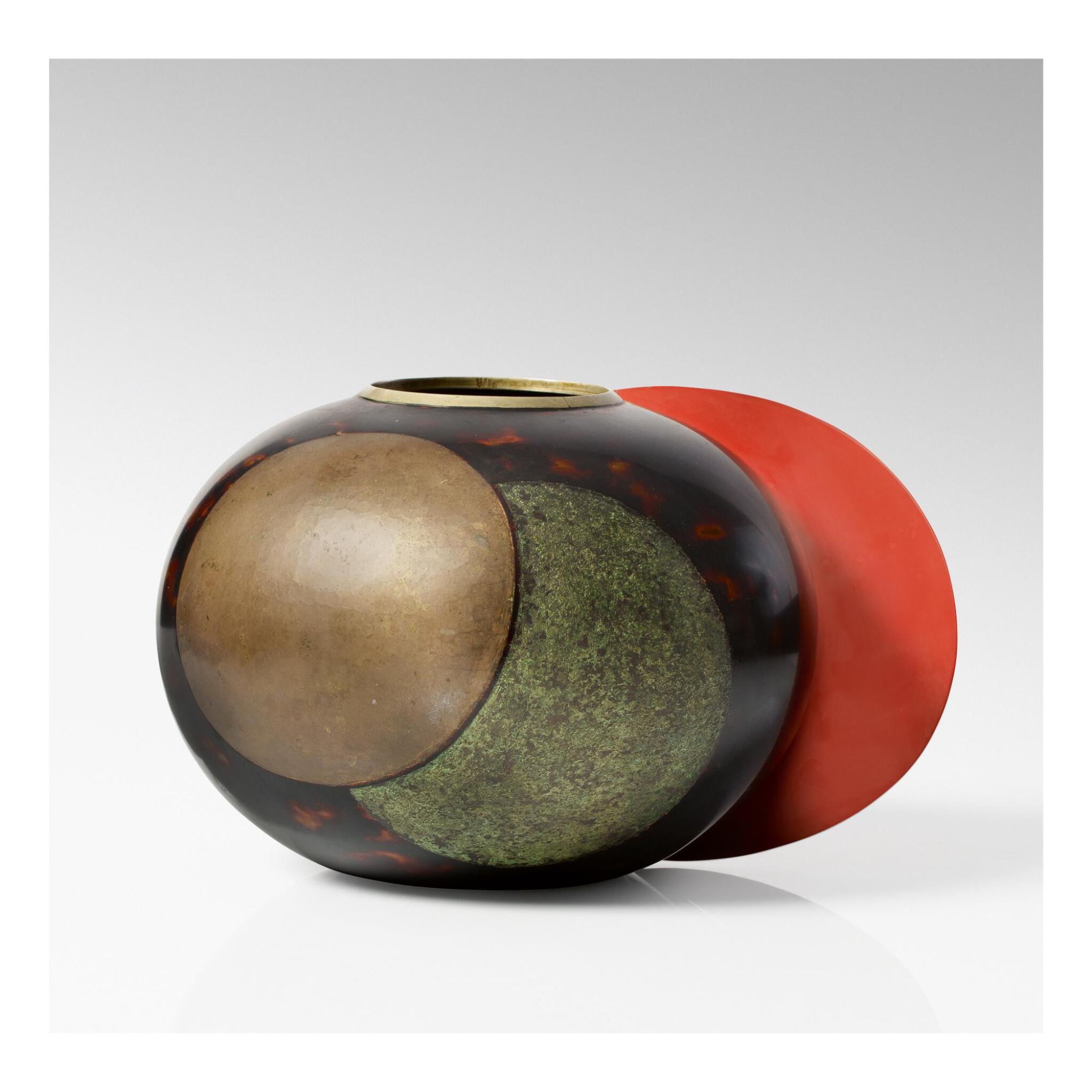 Overall in very good condition. This unique piece is one of very few vases that include an “ailette,” or small wing, ingenuously affixed to the metallic body of the vase with two very small metal nails visible on the interior of the vase. The body is applied with a combination of lacquers and patinas that create rich contrast and texture. One area of the lacquer near the ailette measuring approximately 1 inch wide presents with very minor irregularity in the lacquer application which visible when inspected under black light and barely perceptible with the naked eye. The ailette presents with its original bright red lacquer surface with very fine surface scratches that are consistent with age and very gentle handling. The upper edge of the ailette where the ailette meets the body of the vase with a small area of loss to the lacquer, only visible upon close inspection and not visually distracting. The ailette with another small loss to the lacquer adjacent to the upper end of the crescent, not visually distracting. The metallic rim with very minor oxidation to the metal concentrated to the inside of the rim, as well as a small area of concentrated vertical lines to the rim, possibly inherent to production, and pictured in the catalogue photography. The two circular decorative elements on the body of the vase (one articulated in patinated metal and the other in textured sage green lacquer) present with signs of expected wear. The patinated metal area with small and minor traces of discolorations and oxidation. The green lacquer area with some very minor loss to the lacquer surface to the edges only visible upon close inspection. The underside of the vase presents with three areas of adhesive residue that can be removed at the client’s discretion. A unique and extremely rare example of Jean Dunand’s use of the dynamic “ailette” element in the mid-1920s. A stunning and highly evocative piece demonstrating Dunand’s mastery of the lacquer technique.

Jean Dunand’s exceptional “Ailette” Vase represents one of the greatest achievements within the artist’s œuvre. It is a testimony not only to Dunand’s mastery of lacquer, the medium that defined his artistic career, but also to his unique aesthetic vision in which form, material and decoration intersect to create an entirely novel work.

By the time Dunand left his native Switzerland and settled in Paris to establish a coppersmith studio in 1897, he had demonstrated an impressive understanding of the artistic possibilities of hammered and sculpted metal, as illustrated by his recurrent presence at the Salon d’Automne and the Salon de la Nationale in the 1900s. It was not until 1912 that he became acquainted with the Japanese technique of lacquer. Dunand explained how his interest in the technique was sparked in his very own studio: “One day, in making a close study of several Japanese vases that I had been asked to repair, I noticed that the Japanese coppersmiths had increased the splendor of their works by using lacquer. So I then sought to uncover their secrets, but in vain. As it were, and fortunately for me, the Japanese themselves were interested in my work in hammered copper and questioned me on details of a technical nature. So I proposed an exchange: I would give them my secrets if they would explain theirs to me.”

One Japanese artist in particular, lacquerer Seizo Sugawara, worked closely with Dunand on perfecting the complex process. He demonstrated that the advantage of the lacquered coating was twofold. First, it solved the persistent problem of corrosion experienced by metalsmiths from Europe. Second, and moreover, the bright and reflective lacquered surface offered a striking visual complement to an object’s raw metallic body. Dunand fully embraced the medium and, as a result, he became one of the first Western artists to master the technique, applying it to numerous forms, including vases, screens and accessories.

Dunand’s lacquered pieces gained popularity through group exhibitions at the Galerie Georges Petit. The gallery was instrumental to the artist’s career, showing his work as part of what was labeled the Nouveau Groupe (“New Group”), which included his peers Jean Goulden, Paul Jouve and François Louis Schmied. Together, they presented new work once each year, between 1920 and 1933. As evidenced by a period photograph, Dunand’s “Ailette” vase was first introduced to the public in the group’s 1926 exhibition. It was presented alongside vases with similar artistic attributes, but none with such complexity or nuance as the present lot.

The vase was first described as a vase à ailette, or “small winged vase,” a reference to the red lacquered crescent that dramatically slices one half of the vase on a skewed axis. The ailette is strongly evocative of the moon and star emblem that is central to Islamic iconography, which likely led to the adoption of the piece’s more poetic title, “Arabic Moon and Star,” among collectors. As an aesthetic device, the ailette signifies an important and unprecedented modernist approach for Dunand, who up until this point favored more traditional shapes for his metallic vessels. Nonetheless, Dunand applied ailettes across a variety of vases that he produced during the same period, using them to complement the glistening surface of a vessel with relief and dimensionality. Some ailettes were skillfully placed around vases’ necks; others decorated with a superposition of spherical wings concentrated to one side. This is the only known vase from the series to present a vertical ailette.

In the present lot, the ailette and the many textured surfaces that adorn its body culminate to create a highly geometric, autonomous work with a uniquely sculptural presence. It is an unequivocal masterpiece within the artist’s body of work, exemplifying the radical treatment of form and revolutionary artistic vision that made Dunand a pioneering figure in the decorative arts landscape of his generation.