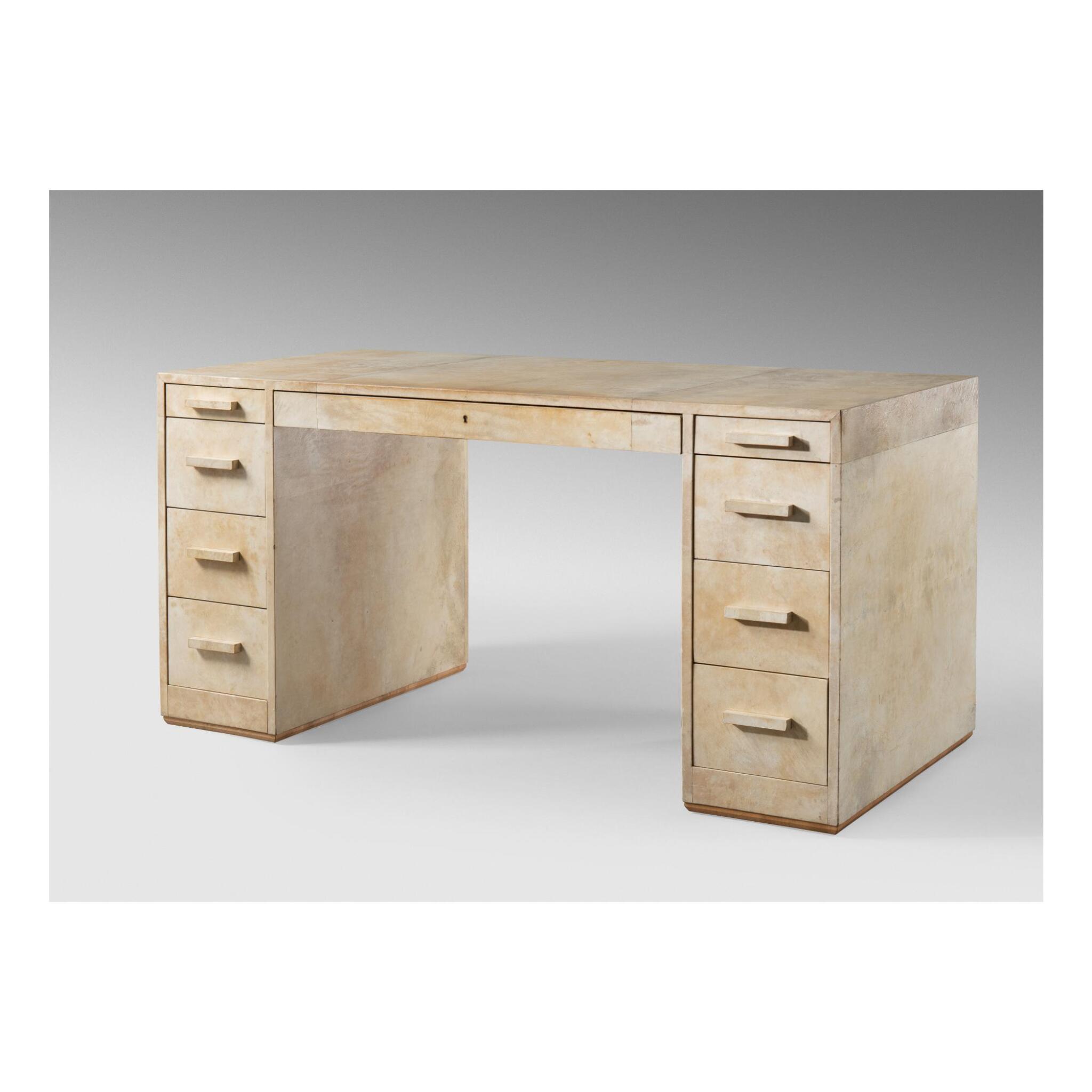 Overall in very good condition. An extremely rare piece with illustrious provenance, this desk is offered en suite with the lot 10, a wastepaper basket that has always remained with the desk since its earliest provenance. The desk is fully covered in vellum except for the underside of the desktop, which reveals the piece’s main oak body. The vellum displays a highly nuanced cream color palette with beautiful, subtle variation in tonality. The vellum has been extremely well-preserved and displays with some expected scattered, minor surface scratches, abrasions, areas of very minor crackling and surface undulation, some occasional shallow dents and dimples, and faint discolorations consistent with age and gentle use. The vellum with some areas of sensitively undertaken painted restoration concentrated to the edges and left side of the desktop, consistent with the color palette of the vellum and only visible upon close inspection. The front inner vertical edge of the proper right cabinet with a small loss to the vellum measuring approximately 1 inch high, visible in the catalogue illustration. One drawer of the same cabinet presents with very minor loss to the vellum in one corner measuring approximately 1/8 inch. Another drawer is slightly difficult to open. This desk is offered with a key which presents with light oxidation to the surface consistent with age. This desk and the accompanying wastepaper basket provide an exciting opportunity for collectors to acquire an exceptional matching set by Jean-Michel Frank.

This lot is offered together with a certificate of authenticity from the Comité Jean-Michel Frank.

The magnificent Château de la Croë, designed by renowned decorator Armand-Albert Rateau, was originally built in 1928 for the British aristocratic couple, Sir William Pomeroy Burton and his wife, Lady Barbara. The property is a remarkable ode to French neoclassicism best symbolized by the château’s dramatic curved colonnade on the rear terrace. Situated on the idyllic coast of Antibes in the heart of the French Riviera, the allure of this sumptuous castle captivated the imagination of the Duke of Windsor, formerly King Edward VIII, and his American wife, Wallis Simpson, who leased the property for a period of over ten years, between 1938 and 1949.

The residence was partially furnished when the Windsors moved in, although, apart from a few furnishings by Rateau specifically created for the location, little is known about the original interior decoration of the château. It is known that the present desk and wastepaper basket (lots 9 and 10) by Jean-Michel Frank adorned the interior but, unlike many of the commissions realized by Frank throughout his short but prolific career, their precise history is somewhat elusive. It is very likely that the original owners of the château commissioned the desk and wastepaper basket themselves, either directly from Frank or through Rateau. While there is no documentation of such a commission, the desk and wastepaper basket’s execution date of 1931, confirmed by the Jean-Michel Frank archives, coincides with the villa’s construction timeline. This hypothesis is further supported by evidence that Rateau and Frank worked together on several high-profile projects in the early 1930s, which included the interior decor of the Parisian apartment of Cole Porter.

When the Windsors took up residence at the château, they redesigned much of its interior with the help of the prominent interior decorator and their close friend, Elsie de Wolfe. By this time, the desk and wastepaper basket may have already been in the residence, but the possibility that they were acquired through de Wolfe remains open to question. Some of de Wolfe’s most iconic clients included Amy Vanderbilt, Anne Morgan, as well as Henry Clay and Adelaide Frick, and she knew Jean-Michel Frank personally. While de Wolfe was best known for neoclassical interiors, her very own home was decorated with pieces from contemporary designers like Pierre Legrain and Max Ingrand, showing that she had a taste for the latest fashions of interior design. One can easily envision the rich materials and modernist lines of the desk and wastepaper basket having great appeal to de Wolfe.

While the precise date that these pieces first entered the Château de la Croë is undetermined, that they inhabited such a luxurious residence comes as no surprise. Both the desk and wastepaper basket typify Frank’s iconic style—absent of any decoration, their forms refined to the purest lines and volumes and covered with luxurious vellum. Their forms are classic examples of the dramatic tension Frank sought to create between austerity and elegance, resulting in a truly modernist aesthetic. Only one similar variant of the desk model is known to exist and was produced by Comté towards the end of the 1930s. Along with two complementary vellum-clad folding screens by Frank, the desk and wastepaper basket are known to have remained at the château until 1955, when they were believed to have been sold at a local auction. An extraordinary work of craftsmanship embodying the essence of Jean-Michel Frank’s restrained and luxurious style, this two-piece ensemble has remarkably remained together since its production.