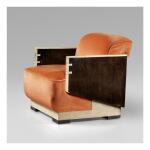 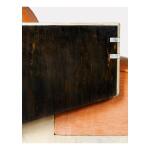 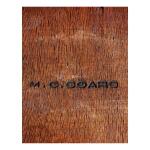 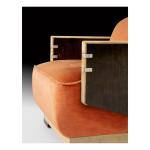 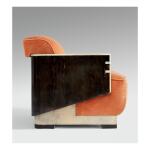 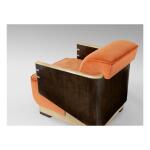 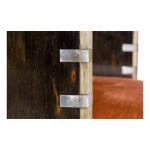 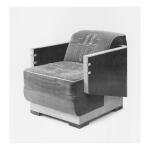 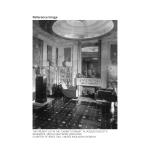 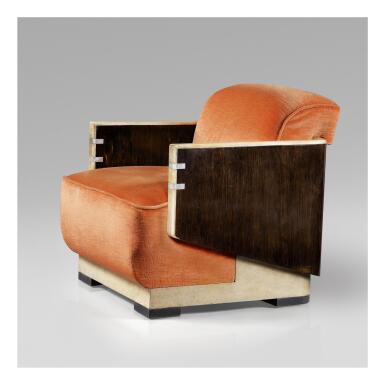 Designed and executed for the hôtel particulier of Jacques Doucet, rue Saint-James, Neuilly-sur-Seine

Overall in very good condition. When viewed firsthand, the ebony presents with rich variations in color ranging from dark brown to burnt sienna. The wood with some light surface scratches and occasional areas of minor abrasion concentrated to the edges of the armrests, the largest measuring approximately 1/2 inch long and not visually distracting. The wood also presents with superficial fissures, light crackling, and minor edge wear consistent with age and the natural evolution of the material, only visible upon close inspection. The ebony feet present with areas of light abrasion to the surface that are consistent with use, as well as two areas of minor loss to the wooden surface, the largest measuring approximately 1 1/4 inch. The vellum surfaces on the base and armrests display a nuanced cream coloration and show expected signs of age in the form of light scratches, surface abrasions, occasional darkening spots to the surface and scattered areas of discoloration concentrated to the upper side of the armrests that are consistent with gentle use. Two corners of the base as well as one back corner of the armrest with very light lifting to the vellum surface. The mother-of-pearl inlays on both sides of the armrests with some occasional light darkening consistent with age. As pictured in the catalogue photography, a few of the small vertical mother-of-pearl pieces are absent from the two lower bands of the armrest and are easily replaceable at the client’s discretion. This armchair has been sensitively reupholstered in coral velvet and presents with a clean and impeccable surface that is highly complementary to the overall appearance of the armchair. This unique piece of Cubist inspiration displays a magnificent combination of materials, textures and colors that contribute to making the present lot a masterpiece of modernist design.

Commissioned directly from the artist by Jacques Doucet, Neuilly-sur-Seine, circa 1923

Valerie Lapierre, "The Deco Rater," The World of Interiors, January 2014, pp. 54-55 (for the present lot illustrated)

In the spring of 1914, Marcel Coard, then a young twenty-five-year-old decorator, designed a round-shaped vitrine in ébène de Macassar with lacquer and ivory brackets for the most influential patron of the early 20th Century: Jacques Doucet.

A celebrated Parisian couturier, Doucet made use of colorful and textured fabrics, he discarded the corset and drew inspiration from oriental designs. The Parisian elite, including actresses like Gabrielle Réjane and Sarah Bernhardt in particular, would go to him for dresses and garments. An educated Art Deco enthusiast, knowledgeable about its many forms and stylistic nuances, Doucet never stopped collecting. From 18th Century French furniture to Cubist paintings by Pablo Picasso, as well as book bindings and contemporary furniture that he commissioned, Doucet surrounded himself with all forms of creative work by dynamic intellectuals and eminent figures of the art world. One such figure was André Breton, his personal advisor and librarian until 1927, and the person who convinced him to buy one of Picasso’s great masterworks, Les Demoiselles d’Avignon, in 1924.

In June 1912, he sold his large collection of furniture, objets d’art and 18th Century paintings at auction over several days—a sale he referred to as “the collection of my grand-father.” Following the sale, he decided to position himself as a patron of contemporary art and design, giving carte blanche to artists that he carefully selected and who were to create works of art collaboratively. In an interview with Félix Fénéon in 1921, he explained: “what role do I want to assume? The following: getting talented and young creators excited about taking risks, to learn from their mistakes, and to directly work with them.” The “role” he assumed consisted of having those artists create works of art that he would stage in his hôtel particulier in Neuilly that he had built, which would become a treasure chest for his new collections. Pierre Legrain, who executed many book bindings for the couturier, was in charge of guiding Doucet’s new talents. As the artistic conductor for this private retreat, Legrain effortlessly harmonized the diverse creations of the contemporary avant-garde, ranging from such artists as Rose Adler, Joseph Csaky, René Lalique, Marcel Coard, Eileen Grey and Gustave Miklos, complemented by paintings by Pablo Picasso, Georges Braque, Amedeo Modigliani, Henri Matisse and the Douanier Rousseau. As a result, the interior of Doucet’s hôtel particulier was unparalleled, referred to as a “temple for modern art” and was reproduced in the periodical L’Illustration, just a few months after Doucet’s passing.

It was in this creative and galvanizing environment that Marcel Coard executed the present Cubist armchair made primarily with parchment and ebony, which originally included an upholstery design based on a drawing by Gustave Miklos. It is a unique piece, and the only known example of a collaboration between Coard and Miklos. Its imposing Cubist design and dark ebony surface contrasts with the light color of the parchment and the glistening mother-of-pearl insets on each arm. The armchair displays the strong influence of Doucet and his love for Cubism, as well as an expressive contrast in shapes and materials that characterizes future works by Coard.

Sold in November 1972 as part of Jacques Doucet’s estate sale, it was bought by the Galerie du Luxembourg which sold it to Félix Marcilhac just a year later. A fundamental piece in the living room of Marcilhac’s private residence in Boulogne, it was the armchair reserved for the host, who had it re-upholstered in coral velvet.

The great majority of the pieces realized by Marcel Coard for Jacques Doucet are presently held in the collections of the Musée des Arts Décoratifs in Paris, including the couturier’s desk covered in python skin as well as a red lacquer armchair inspired by African aesthetics, both given by the family in 1958. The present Cubist armchair is consequently one of the last pieces realized for Jacques Doucet by Marcel Coard that still remains in private hands.