By Royal Appointment: The World of Ben Enwonwu

Owing to the instructions issued by the British Government on Monday 23 March, the sale of Modern & Contemporary African art that was scheduled to take place on 25 March will now take the form of an online sale, running from 27 to 31 March. Details of how to bid online are available here. 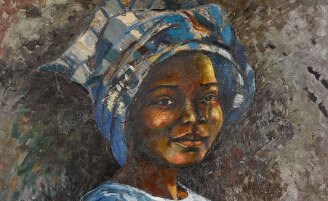 H e was the Nigerian artist who charmed Queen Elizabeth II. Now, a quarter of a century after his death, Ben Enwonwu is widely considered one of the most important African artists of the 20th century. He cut an enigmatic figure, a painter, sculptor and anthropologist who dressed in tailored three-piece suits, flowers punctuating his lapels. In the 1950s and 1960s, Enwonwu redefined the image of the modern African man for a generation of Europeans who were gradually loosening their colonial grip on the continent.

The serene subject of Sefi, painted in 1953, is believed to be Princess Sefi Atta, then girlfriend and later wife of the celebrated Nigerian poet Christopher Okigbo. She would go on to become a prominent educator and the first female Nigerian Ambassador. “There is an innocence and purity about Sefi,” wrote Okigbo. Depicted in her traditional vibrant dress, Enwonwu paints her as a joyous swirl of colours and smiles. It is a painting “which captures Nigeria’s spirit of the time amidst an exhilarating cultural revival”, explains Hannah O’Leary, Sotheby’s head of Modern & Contemporary African Art.

Three years later, Enwonwu sculpted a bust of Sefi’s sister-in-law, Princess Afi Ekong, a cast from which also features in the sale. Ekong was equally accomplished: she was a successful artist and the owner of the first private gallery in Nigeria. Enwonwu employed his signature casting and composition – textural, graceful – to immortalise his close friend.

The two works highlight Enwonwu’s access to – and comfort with – highborn subjects; he was, after all, from a noble family himself. Another royal portrait, Tutu, his 1974 portrait of a Yoruba princess, gained iconic status. But some of his sitters had more modest tales: in 2019, Enwonwu’s portrait of an American hairdresser, Christine, sold at Sotheby’s for £1.09 million.

In the mid-1950s, Enwonwu found himself in the public eye at a time of growing tension over British colonial rule in Nigeria. “Enwonwu was at the very epicentre of the intellectual fight for independence from colonial rule, as well as a unified Nigeria,” notes O’Leary. “Exceptionally gifted, the artist was armed with an ability to orate.” He effectively traversed two worlds: Western culture and African turmoil. It was a complicated story: he won a scholarship to the Slade School of Fine Art in London but concluded that art influenced by colonialism was ultimately “doomed”. 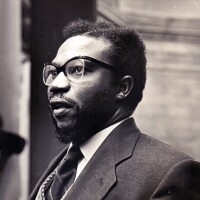 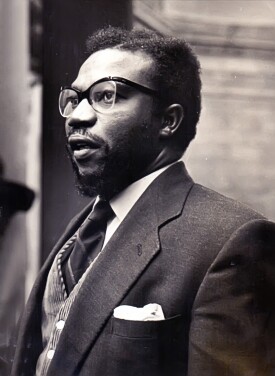 This bridging of territories can be seen in his work, which brought European Modernism to Nigerian themes, such as ritual, dance and the supernatural. His son, Oliver Enwonwu, told the New York Times that, ultimately, his father’s greatest skill was in bringing people together. His work, he said, promoted “all things black and all things beautiful.”

But it wasn’t just Nigerian royalty that Enwonwu honoured. In 1956 he received perhaps his most famous commission: to sculpt a statue of the young Queen Elizabeth. This was the first time an African artist had completed a portrait of a ruling European monarch. Regal sittings were held at Buckingham Palace.

Although some British critics claimed that he had “Africanised” the Queen’s features, the work brought him international fame. In 1959 it was unveiled by the last British Governor-General of Nigeria, Sir James Robertson, at a ceremony in Lagos. At the event it was remarked that the Queen was become one of Enwonwu’s most prominent collectors: while sitting for the artist she had spotted the original version of Afi Ekong in the studio. She acquired it just as Nigeria acquired independence.

Should you require further assistance, please contact Fleur.Manning@sothebys.com. Similarly, Hannah O’Leary, Head of Department, remains at your disposal should you wish to discuss any of the material to be offered. Hannah can be contacted at Hannah.Oleary@sothebys.com. With many thanks for your understanding.