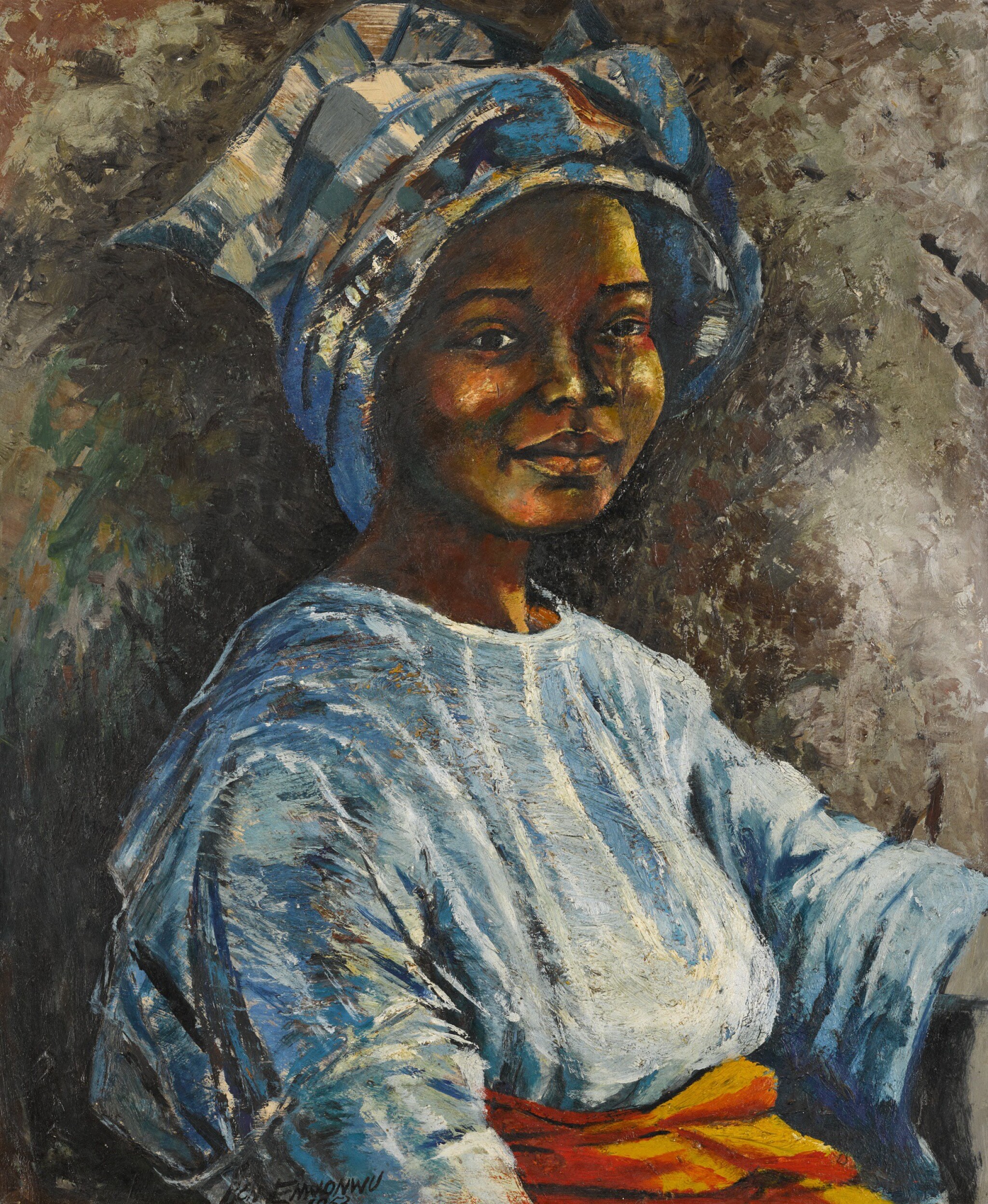 This work was examined by an external expert. Please contact the department on AfricanCTP@sothebys.com for a full condition report.

Christopher Okigbo was born in 1932, not 1923 as stated in the printed catalogue footnote.

Acquired directly from the artist, probably in Ibadan, Nigeria, c. 1953-54

The sitter of this portrait is almost certainly Princess Judith Safinat "Sefi" Atta (OFR), daughter of Alhaji Ibrahim Atta (1884-1964), the Atta of Ebira, and later Mrs Christopher Okigbo. Amb. Attah herself has confirmed the likeness; she was a friend of the artist and he requested she sit for him on several occasions.

Sefi was born in Okene in 1933, into a distinguished royal family: her siblings include governors, ambassadors, and other government officials, prominent businessmen and medics (one of her brothers was Abdul Aziz Atta, another friend of Enwonwu’s and husband of Afi Ekong, see lot 14). Schooled at Achimota School and Aburi Girls' Secondary School, Ghana, she completed her secondary studies at St. Theresa's College, Ibadan, in 1951. It was in her final year there that she met her future husband, the celebrated poet Christopher Okigbo (1932-67), who was studying at University College Ibadan 1951-56. Between 1951 and 1953, Sefi taught at the first Native Authority primary school in Okene, which had been founded by her father. However, she would have returned to Ibadan often during that time to visit Okigbo, placing her at the very cultural heart of the Nigerian nationalist movement.

The 1950s was an incredibly productive time for Enwonwu; he had completed his training in England and had enjoyed a highly successful exhibition tour in the United States in 1950. He returned to Nigeria an international star, and enjoyed being back home in Nigeria, where he toured the country and documented contemporary life in the years leading to independence. A 1951 trip to Kano, Zaria and other northern cities, may well have taken him through Sefi’s home town of Okene.

In 1953, Enwonwu was approached by the University College, Ibadan to produce a sculpture for its Chapel of Resurrection. This commission led to Enwonwu’s most accomplished wooden sculpture, The Risen Christ, carved from a four-ton block of Iroko wood. During this time in Ibadan in 1953-54, Enwonwu socialised with several other graduates of the prestigious Government College, Umuahia, where under the tutelage of Kenneth C. Murray he had decided to pursue a career as a professional artist. The same school produced a remarkable generation of writers, including Chinua Achebe, Elechi Amadi, Chukwuemeka Ike, Chike Momah and Christopher Okigbo, all of whom were in Ibadan at this time, where their circle of artists and writers expanded to include the likes of J. P. Clark and Wole Soyinka.

Thus Enwonwu was at the very epicentre of the intellectual fight for independence from colonial rule, as well as a unified Nigeria. As the nationalist movement gathered momentum, the fragmented nation to be was driven by an impulse of cultural rebirth and yearning for self-affirmation. Exceptionally gifted, the artist was armed with an ability to orate, author unique essays and paintings to illustrate a belief that for Nigeria to regain a sense of its indigenous identity, unsettled by colonialism, it was imperative for the nation to push for cultural affirmation through the development of a new visual language.

It was in this context that Enwonwu painted this portrait of Sefi, a work full of vigour and pulsating with cultural pride. Enwonwu appears to have taken some artistic license in adding the distinctive short tribal marks of the Ebira on each cheek; Sefi herself does not have these markings, but her mother Amina, to whom Sefi is said to bear an uncanny resemblance, did. Enwonwu’s impressionistic representation of the patterned textiles woven by Ebira women further identifies the sitter and her royal status. Her blouse, beautifully juxtaposed by her wraparound skirt of brightly coloured damask, is fashioned from Okene cloth. Sefi’s home town of Okene was famous for its fabric production, which was traded and worn throughout the country. These woven cotton indigo and white cloths were hand-spun by many generations of Ebira women in a variety of patterns, always with a wide variety of stripes in the warp. Indeed, Sefi’s father Alhaji Ibrahim is credited with encouraging new forms of weaving amongst Ebira women using float-weave patters as well as silk, rayon and viscose fibres. The artist employs a plethora of European painting techniques that elevate the sitter and give the work a universal appeal. There is no doubt that Sefi is one of Enwonwu’s most distinguished work of the 1950s, a regal and dignified portrait of a young woman which captures Nigeria’s spirit of the time amidst an exhilarating cultural revival.

At the time of this portrait, the 20 year old Sefi had been courted by Okigbo for two years. In his letters of this period he writes: “There is an innocence and purity about Sefi… I’m madly in love with her, more than it is possible with any woman” and “Every time I see her, I fall in love anew”. Their relationship became long-distance as Sefi left for Ireland in 1954 where she studied Geography and History at University College, Dublin, becoming the first Ebira woman to obtain a university degree. Much like her father, Sefi was a great proponent on the importance of education. She received her postgraduate Diploma in Education from the University of Reading, England, in 1958 and, like Enwonwu himself, was employed by the Federal Ministry of Education on her return to Nigeria. The couple’s relationship maintained its long-distance nature even after their marriage, with Okigbo moving back to Ibadan from Nsukka, and Sefi serving as headmistress at schools in Yola and Kano before being posted to Kaduna in 1964 as the first Chief Woman Education Officer in Northern Nigeria. In 1966, Okigbo relocated to Enugu, where he founded the publishing house Citadel Press with his old schoolfriend Chinua Achebe. He advised Sefi to remain in Kaduna with their young daughter for their safety and, unbeknownst to them, he joined the Biafran Army as a field-commissioned major during the Nigerian Civil War and was tragically killed defending Nsukka in August 1967.

Following this, the devastated Sefi threw herself even further into her career as an educator, passionately encouraging Northern girls to use education as a means of empowering themselves in the new post-colonial Nigeria. She became Director of Higher Education in 1976 and served in this post up to 1982 when she was appointed Nigeria's first female Education Ambassador to UNESCO. In 1986 she left Paris when she was appointed the first female Permanent Secretary in a Federal Ministry, that of Science and Technology, and in 1987, she became the first female Nigerian Ambassador, when she was posted to Italy with concurrent accreditation to Greece and Cyprus. She was recalled in January 1995 to serve as the first Minister of the Federal Ministry Of Women Affairs and Social Welfare, and Member of the Federal Executive Council. Sefi has served, and continues to serve, on numerous boards, councils and committees and was awarded the Order of the Federal Republic (OFR) in 1983 in recognition of her service to Nigeria.

Until now, this fine portrait was in the family collection of a prominent West African academic and writer, and was known within the family as The Nigerian Princess. This collector first met Enwonwu when they were lecturing at University College Ibadan in the early 1950s, when this work was most likely acquired, although their paths crossed many times and in different countries throughout their lives. Both Enwonwu and the owner would later play major parts as a critical voices in the wake of pan-African independence and the Negritude movement through numerous writings, speeches and lectures, particularly in the First International Conference of Negro Writers and Artists, Paris 1956.

We are grateful to Amb. Sefi Attah and family, and to Prof. John Picton, for their assistance in cataloguing this lot.