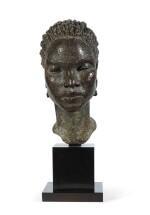 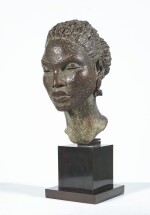 Surface: Light rubbing in places as well as minor instances of oxidization.

Summary: Overall the work is in very good condition.

Please telephone the department on +44 (0) 207 293 6323 or email africanctp@sothebys.com if you have any questions regarding the present work.

Afi Ekong was not the first female Nigerian artist to be academically trained abroad, as stated in the printed catalogue footnote: Clara Ugbodaga earned her degree from Chelsea in 1954.

Acquired from the above by the current owner

Lagos, Residence of the British High Commissioner, Salon Exhibition of paintings and sculptures from 1985 London Exhibition of the Royal Society of British Artists, October 1987

London, Tate Britain, Artist and Empire, 25 November 2015–10 April 2016, another edition lent by Her Majesty The Queen, titled Head of a Nigerian Girl

In the present lot, Ben Enwonwu celebrates the beauty and importance of his good friend and contemporary, Constance Afiong “Afi” Ekong (1930–2009), one of Nigeria’s most distinguished artists, gallerists and public figures.

Enwonwu conceived the present lot circa 1956, the same year that he became the first African artist to receive a royal commission. Queen Elizabeth II visited Nigeria, then still under British colonial rule, on a royal tour in January and February 1956. Enwonwu proposed to Alan Lennox-Boyd, then Secretary of State for the Colonies and later Viscount Boyd of Merton, that he produce a life-sized bronze portrait of the Queen to commemorate the visit, to be installed at the Nigerian House of Representatives in preparation for independence in 1960. Enwonwu saw this as an opportunity to further his international recognition and cement a lasting reputation as one of the world’s great modern artists.

The commission was announced in November 1956, and Enwonwu began his assignment in March 1957. The artist would spend a significant amount of time in London that year. The sittings took place at Buckingham Palace, where he was provided a studio, and in the Maida Vale studio of Sir William Reid-Dick, Enwonwu’s colleague at the Royal Society of British Artists. A full-sized resin version of the portrait was shown at the 1957 annual exhibition of the Royal Society of British Artists before the official unveiling of the final bronze version at the Tate Gallery in London in October 1958. It was finally installed in Lagos in 1959, the same year Enwonwu returned to Nigeria as official art adviser to the federal government. The final version attracted considerable political controversy, ultimately manifesting itself in the British press criticizing Enwonwu for ‘Africanising’ the Queen’s features.

Indeed, similarities can be seen between the ‘Africanised’ Queen and the present lot. Enwonwu was known for his reinterpretation of traditional Nigerian aesthetics; here he depicts Chief Afi Ekong with a traditional hairstyle - tightly pulled back and bunched at the neck. With down-cast eyes and a slight smile, her expression is angelic and serene, a style which turned out to be one of the artist’s signatures. This beautiful textural casting of Afi Ekong is exemplary of Enwonwu’s masterful sculpting skills. Throughout his career, Enwonwu continued to experiment and evolve his sculptural techniques. Despite receiving criticism early on for his rough and unpolished surfaces, Enwonwu always stressed his technical choices as conscious creative decisions and saw an elegance in his textural surfaces.

A clay version of the present lot can be seen in BBC Two’s Panorama, originally broadcast on 11 November 1957. The video shows Ben Enwonwu in the studio in Maida Vale, working on both portraits of Queen Elizabeth II and Afi Ekong. It was during one of the Queen’s sittings in this studio that the she first noticed the sculpture of Afi Ekong, and the original version was acquired by Her Majesty Queen Elizabeth II that same year (ref. RCIN 2014 titled Bust of a Young Girl). Other casts were later acquired by the German government, the US State Department, and Viscount Boyd of Merton.

Afi Ekong was born into the royal family of the Obong of Calabar, where she met and married Prince Abdul Aziz Atta (1920–1972), son of the Atta of Igbirra (and brother of Sefi Atta, see lot 13) in 1948. At that time Abdul Aziz Atta was District Officer in Umuahia, where Enwonwu had completed his secondary education at Government College. He would go on to occupy several high-ranking roles, including heading the ministries of defence, communications, industries and finance, before becoming Head of the Federal Civil Service. Ekong would have sat for this sculpture while accompanying her husband during one of his many postings to London. While there, Ekong studied fashion design and fine art at the Oxford College of Arts and Technology, Saint Martin’s School of Art and the Central School of Art and Design. With its elegant features and statement earrings, this portrait highlights Afi Ekong’s striking beauty and sophisticated fashion sense.

Ekong returned to Lagos in 1957 as one of the first female Nigerian artists to be academically trained abroad. She moved in elite social and political circles, establishing herself as an artist, arts promoter and nationalist. She continued to paint alongside her other activities, and in 1958 she became the first woman to hold a solo exhibition in Nigeria. In the 1960s she opened the first commercial art gallery in Lagos, The Bronze Gallery; another location in Calabar followed and is still in operation today.

Ekong worked tirelessly to promote Nigerian artists both at home and abroad, producing a weekly television program called Cultural Heritage, which she used to highlight the work of her contemporaries, such as Uche Okeke and Yusuf Grillo. She was a member of the selection committee for the Nigerian Council for the Advancement of Art and Culture’s Nigerian Art Exhibition, which opened on 1 October 1960 as part of Nigeria’s independence celebrations. This exhibition provided artists with national exposure and helped to identify Nigeria’s most important post-colonial talents. Amongst the group of chosen artists was Ben Enwonwu, and the present lot (possibly the same cast) was one of a selection of his recent work shown.

Ekong herself participated in countless international exhibitions, such as the Phelps-Stokes Fund’s Washington D.C. exhibition Art of Africa of Our Time (1961-62) and the World Festival of Negro Arts in Dakar (1966), where she brushed shoulders with creatives like Duke Ellington, Josephine Baker, Langston Hughes and Senegalese president-poet Léopold Sédar Senghor. In July 1963, Ekong was included in a New York Times article by Marc and Evelyne Burnheim titled ‘A New Kind of African Woman’. Her work continued past the borders of Nigeria, and in the 1970s, the artist would chair the cultural sector of the UNESCO National Commission. Ekong undoubtedly left a lasting legacy in postcolonial Nigeria, establishing herself as a successful artist in her own right but also as an internationally recognized cultural leader and taste influencer.