S otheby’s October 2021 auction of Beatles memorabilia marks the 40th anniversary of the very first, when the company pioneered putting rare and often unique rock collectibles under the hammer. In its day, that inaugural sale was derided as absurd, rock music deemed too ephemeral and recent to have any serious collector value, let alone be a sound investment. But December 1981 propelled what quickly became big business in London, New York and Tokyo, all the major auction houses hosting twice-yearly sales, artifacts pulled from attics and bottom-drawers attracting ever-escalating prices. Now, another century along, the market is more vibrant than ever, online and in salerooms, and Sotheby’s October 2021 auction, forty years after the first, has plenty of rich pickings.

This sale is entirely Beatles, whose startup dominance of the marketplace has remained invincible, in keeping with the ever-strong interest in these remarkable artists, their lives and music. No longer do supposed experts scoff at the notion that a set of Beatles autographs could have anything more than token value. In that 1981 Sotheby's sale, a signed photo estimated at £25–35 went under the hammer for a headline-grabbing £210. In the current sale, a set is estimated at £4000–£6000. Handwritten lyrics, when they come up, can go for upwards of £200,000.

The scope of Sotheby’s October 2021 auction reflects both the depth of the Beatles’ narrative and the limitless interest that maintains in everything they did and touched. So, there are original artworks, there’s an award, an acetate disc, an in-flight bag, concert and film posters, fine prints, manuscripts, business documents, an unpublished book proof, a matador hat owned by their manager Brian Epstein, pieces of Paul McCartney’s school art, autographed record sleeves, photos, tickets and programmes, even a piece of the Cavern stage on which the Beatles played close to 300 times, first chopped up and sold in 1964, as an early fundraiser for Oxfam.

And, as ever with the Beatles, each and every item tells a story.

Whenever there’s a Beatles item on TV – which is still often – editors like to show film of one of the band’s many airport moments, those organic orgies of adulation with fans hanging off viewing terraces and the Beatles waving at them and the massed photographers while clutching their in-flight luggage. These bags were news themselves in February 1964, when the Beatles were presented with them by Miss London Airport (yes, there was such an honour) after they flew back from Paris on a British European Airways plane. The key feature was the BEA logo topped and tailed by THE and TLES. This smart idea by BEA executive Harry Berry gave the airline great kudos and showed the Beatles to be the most distinguished of VIP passengers, and when they flew to America for their sensational first visit just two days later, there were the bags again, in every photo and piece of film, much to the chagrin of the transatlantic airliner Pan Am. Known in the business as ‘nightstop bags’, the British company made two types of BEA TLES carriers, the most-seen model being a grip bag, but Sotheby’s is auctioning a rare upright design with shoulder strap. Never put on general sale, they were produced in strictly limited numbers, and this one was kept as a souvenir by one of the Beatles’ 1964 flight attendants.

The Beatles had the extraordinary habit either of originating creative ideas or popularising something that already existed, propelling it so high into the consciousness that it looked like they started it. So it was with the promo video. Research can trace short music films back to the jazz age, but once the Beatles started making them in 1965, saving themselves the ordeal of traipsing around TV studios for every new release, the three-minute pop film suddenly became the thing to do, and a clear path to the 1980s MTV era was set down.
This paper dates from November 1967, and its place of writing will have been Soho, London, where Wardour Street meets Old Compton Street. The Beatles were holed up there most of that month, hunched over a Steenbeck film editing table to oversee the assembly of their TV movie Magical Mystery Tour. They also had a new single on release – Hello, Goodbye – for which they’d shot enough footage for several variations of a promo. It was filmed on stage at a West End theatre, the Saville, which was still under the ownership of their management company despite the recent death of Brian Epstein.
This was a period when the Beatles strove to be self-contained. Paul directed the shoot, and then, as this paper shows, John and George were closely involved in the editing. Topped by John’s doodled pair of eyes, the note is a sequenced summary of shot selections for two cuts of the promo, the first with the Beatles in civvies, the second in their Sgt Pepper costumes. The document has both John and George’s handwriting, and is clearly a one-off.

A constant detail in the Beatles’ dominance of the public forum in the 1960s was that they were true to themselves and spoke their minds. This was illustrated again when John Lennon and Yoko Ono launched a campaign for world peace. Its peak moments were the two bed-ins they held in 1969, in Amsterdam and Montreal, when they twice took to their pyjamas for a week and invited the world’s media into their hotel room to explain all they were saying, which was that – in the words of Lennon’s enduring anthem – it was high time this world could give peace a chance.
Lennon remained an outspoken advocate for humankind at least three years after this, and in 1971 wrote and recorded Power To The People. Following its release, he allowed the publisher New English Library to collate some of his pithy observations – chosen from interviews, press conferences and more – into a pocket paperback book, Power To The People: The Political Thoughts Of John Lennon.
But the book never progressed beyond this proof copy to publication. The reasons why aren’t yet fully known, but one will be that discretion got the better of valour. At this very time, the Nixon administration was trying to kick Lennon out of the United States, considering him an unsettling influence on the nation’s youth at a time when the Vietnam War was still raging. To publish this book while simultaneously suffering a hostile FBI surveillance campaign would have been a gift to his prosecutors – besides which, Lennon’s words had been heard loud and clear in the first place.

The entertainment industry likes to give itself awards. Britain’s closest equivalent to America’s Grammy's are today known as the Ivors, when writers of the best and most successful songs of each year are handed statuettes. In the 1960s, such events had far less razzamatazz, so when John Lennon and Paul McCartney dominated what was then still called the Ivor Novello Awards, they seldom bothered to attend. The 1966 prizes, honouring the songs of 1965, awarded top prize to We Can Work It Out, and the two talented lads from Liverpool were also runners-up with Help! while their ballad Yesterday – not issued as a single – was merely the year’s Outstanding Song. With everything quite low-key, neither Beatle went to the presentation held that July and their awards were collected for them by an executive from EMI, which also had its own statuettes for being the Beatles’ record company. Authentic vintage Ivors rarely come to the marketplace, being in each instance true one-offs.

Beatles manager Brian Epstein had a burning passion for Spain and bullfighting that predated his management of the group and maintained to his death in 1967, at just 32. He hero-worshipped El Cordobés, who had risen from poverty to become the most revered matador of the age, and who, quite coincidentally, because of his hairstyle, was sometimes called the 'Beatle Bullfighter'. Epstein also gave support to an accomplished British matador who went by the splendidly Pygmalion-esque name of Henry Higgins.
Whenever Epstein eked vacation time away from managing the Beatles and his numerous other acts, agencies and London theatre, he would zip over to Seville, Madrid and Barcelona and catch the fights; as a VIP guest, he also got to meet the fighters and their managers and was presented with some particularly prized possessions. One was this matador’s hat, very likely from El Cordobés himself. Sold with the hat is a colour photo, surely taken by Epstein himself in his London flat in 1965, in which he staged the precious headgear on a chair together with a pair of art books opened at particular pages.

Though there is an immense body of knowledge about the Beatles (not all of it as right as it could be), life must also have mysteries. This manuscript in George Harrison’s hand, with the lyric of the enduring Tin Pan Alley song All of Me, begs a question so far unanswered. Did he go to the labour of writing out the words because he was going to sing it in a Beatles show – in the Cavern perhaps, because it would be circa 1961 – or did he just do it for his own pleasure or to help someone? Composed in New York in 1931 by Gerald Marks and Seymour Simons, All Of Me has been sung by Louis Armstrong, Billie Holliday, Frank Sinatra, Johnnie Ray, Dinah Washington and many other greats. Whether or not the Beatles were among them, George singing it with his bandmates on one of those Liverpool wooden stages around 1961, it’s good to see the unique manuscript and consider the possibilities. 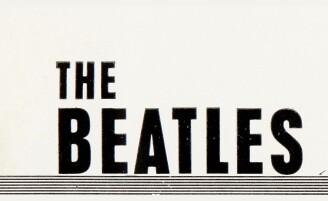