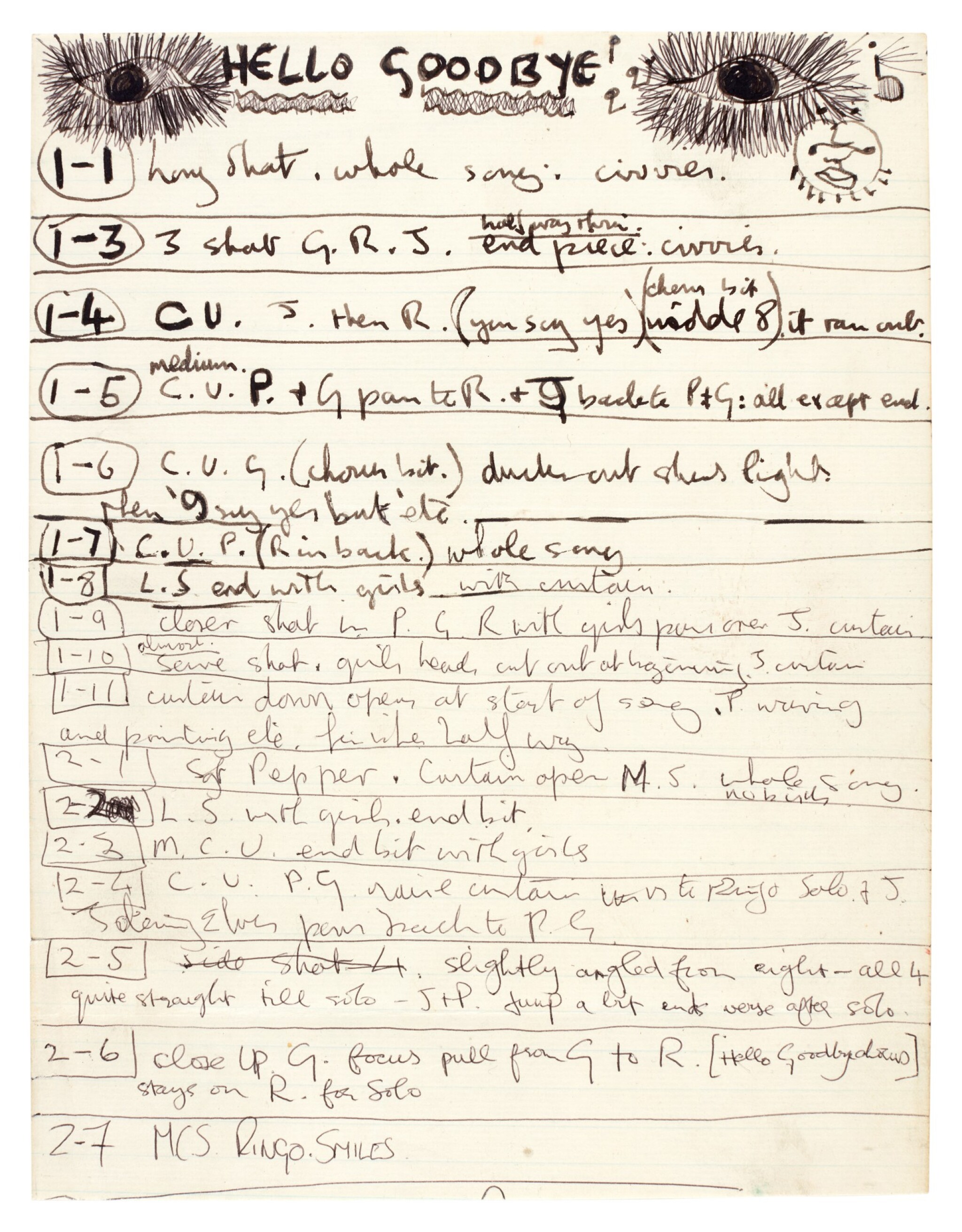 headed "Hello Goodbye" with a pair of eyes, musical notes, and other doodles in Lennon's hand, the note comprising a numbered sequence of descriptive summaries of shots for both versions of the video (first in "civvies", second as "Sgt Pepper"), the first seven shots in Lennon's hand in black ink, followed by nine shots in Harrison's hand in black ball-point, with one final shot in the hand of Mal Evans in black ball-point, altogether 23 lines, one page, ruled paper, 264 x 203mm, [November 1967], trimmed at foot with loss, minor nicks and staining,

AUTOGRAPH NOTES BY JOHN AND GEORGE FOR THE VIDEO FOR 'HELLO, GOODBYE'. The Beatles were innovators in the music video, as in so much else: they were the first major pop artists to make extensive use of promotional videos to stand in for live television performances. By the time of 'Hello, Goodbye' they had been making promotional videos - then described as "filmed inserts" - for two years, working with a number of different directors and bringing an ever-increasing level of sophistication to the genre. Led by Paul McCartney, the band became increasingly interested in avant-garde film-making and decided to try making a film themselves. This resulted in the 'Magical Mystery Tour', which was filmed in the autumn of 1967, and also the video for 'Hello, Goodbye', which followed shortly afterwards.

The song 'Hello, Goodbye' was recorded shortly after the Beatles had finished editing the 'Magical Mystery Tour'. The band decided to use their new-found skills to shoot their own promotional video. On 10 November, a week after they had finished recording the song, they went along to the Saville Theatre (which was leased by Nems) with their Sgt Pepper suits and six showgirls in hula skirts. The project was directed by Paul McCartney:

"Directing a film is something that everyone always wants to get into. It was something I'd always been interested in, until I actually tried it. Then I realised it was too much like hard work. There is always someone arriving saying: 'Do you want the gold pistols or the silver pistols?' Then you think: 'Um, um...' There was so much of that going on - so many decisions to be made - that I ended up hating it.

I didn't really direct the film[s] – all we needed was a couple of cameras, some good cameramen, a bit of sound and some dancing girls. I thought, we'll just hire a theatre and show up there one afternoon.' And that's what we did: we took our Sgt Pepper suits along..." (Paul McCartney, in Anthology, p.278)

The shoot resulted in three distinct videos: in one the band perform on stage in their Pepper suits; in the second they are in "civvies"; the third version mixes footage of the band in both costumes together with clips of them clowning around, joking, dancing and laughing. The current manuscript notes show John Lennon and George Harrison engaged in editorial work for the video, presumably when reviewing the raw footage in the Wardour Street editing suite with Roy Benson. The manuscript lists the different shots taken in both sequences, firstly those in their everyday clothes - if that is a phrase that can be used for the Beatles dress in 1967 - and secondly in their Pepper suits. There is loss at the foot of the leaf; assuming it was a leaf of foolscap paper, approximately 70mm has been lost .

The Sgt Pepper version of the 'Hello, Goodbye' video premiered on the Ed Sullivan show on 26 November 1967, but neither video was not shown in the UK at the time of the song's initial release as it fell foul of a union ban on miming on television.

This is an exceptionally rare manuscript that encapsulates the close working relationship between the Beatles: it shows Lennon and Harrison in close collaboration working on a project that was primarily associated with McCartney. The Beatles were always keenly aware that success in the pop world was about the look as well as the sound, and this manuscript reveals how this attention to the visual extended to the new genre of the music video.