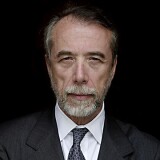 Domenico De Sole was elected Chairman of Sotheby’s Board of Directors in March 2015.  He joined Sotheby’s Board on July 1, 2013 and was appointed Lead Independent Director in December 2013.

Mr. De Sole is co-founder and Chairman of luxury retailer Tom Ford International and former President and Chief Executive Officer of Gucci Group N.V., which he took from a nearly-bankrupt single brand to a $3 billion luxury goods conglomerate.  In addition to his executive leadership positions, Mr. De Sole has served on numerous public company boards. He is a current director at Gap Inc., and Newell Rubbermaid, Inc., and a former director at The Proctor & Gamble Co., Delta Airlines, Bausch & Lomb Incorporated and Telecom Italia, among others.

Mr. De Sole is a passionate and long-time collector of contemporary art and wine.