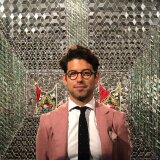 Ashkan Baghestani grew up in Geneva, Switzerland, and has travelled extensively to study and work in Paris, New York, and London. Before joining Sotheby's in the summer of 2012, he studied Design and Management at Parson’s, The New School for Design, USA, earning a BBA Degree in 2009 and later a diploma in Middle Eastern Art from Sotheby’s Institute in 2011. He actively worked for the Jameel Prize at the Victoria and Albert Museum, London.

Mr. Baghestani joined Sotheby's Middle East Department in 2012, focusing on the Contemporary Doha auctions and developing this increasingly important art platform. His in-depth knowledge of the market for Modern and Contemporary Arab, Iranian and Turkish works, his fluency in Persian, French and English, and his contacts in the region have been invaluable in cultivating this important collecting field at Sotheby's, which resulted in many auction records for artists from the region. In 2017, Mr. Baghestani headed Boundess: Dubai, the first international auction held in Dubai. He also headed the first single owner Middle Eastern sale entitled Alchemy: Objects of Desire in 2016 and the first non-selling exhibition from the Estate of American Iranian Artist Manoucher Yektai in 2019. He constantly travels across the Middle East region, establishing a continuous educational programme and directing Sotheby’s numerous travelling exhibitions.