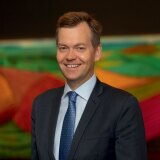 Oliver Barker joined Sotheby’s in 1994, moving to the Contemporary Art Department in 2001, and rising to Chairman, Sotheby’s Europe, Senior International Specialist in 2016. Today, as Sotheby’s Principal Auctioneer, he is a key figure on the rostrum at the major auctions in both London and New York, and over the last year has played a pivotal role in the success of Sotheby's Webby-award-winning livestream hybrid auctions. The Webby Awards, a major international award honouring excellence on the internet, presented Sotheby’s “Auction of the Future” with the highest honour in their Video, Live Experiences (Branded) category.

The livestream auctions, pioneered by Sotheby’s since the pandemic, have been central to Sotheby's recent market leadership, with Oliver presiding over the sale of Francis Bacon's Triptych Inspired by the Oresteia of Aeschylus for $84.6 million (setting the highest price for any work sold in 2020), Botticelli's magnificent Portrait of a young man holding a roundel for $92.2 million in January of this year, and the marathon sales of Impressionist, Modern and Contemporary art that brought $597 million in a single night in May.

Over his career, he has overseen numerous market-defining sales, beginning with the 2004 landmark sale of the contents of Damien Hirst’s restaurant Pharmacy. Four years later he went on to bring works to auction directly from the artist’s studio for the landmark Hirst sale Beautiful Inside My Head Forever, which achieved £111.5 million - a world record for a single-artist sale – just one day after Lehman Brother’s collapsed.

In the same year, Barker led the $40 million (RED) Auction, a major sale arranged by Bono and Damien Hirst to raise money for the United Nations Foundation to support HIV/AIDS relief programmes in Africa. Together with the two further sales that followed, the (RED) auctions have since gone on to raise more than $71.7 million in total. And then, in 2016, the world’s attention turned to Sotheby’s once again for the unveiling of David Bowie’s never-before-seen art collection for an auction that saw Barker take to the rostrum for a “white glove” sale that attracted 1,750 bidders.

More recently, Barker presided over the now legendary sale of ‘the’ Banksy – retrospectively titled Love is in the Bin – which caught the imagination of the world when it was shredded by the artist at the moment the canvas hammered for £1.04 million in 2018. Displayed afterwards in Sotheby’s London galleries, the famed work by the British artist attracted 1,000 visitors per hour who came from across the globe to see the work created in what Barker termed “a brilliant Banksy moment”.